Dean Martin can be heard crooning in the background as Christine Andreas scurries around her kitchen, the phone tucked between shoulder and ear, as she conducts an interview and prepares for a party she’s throwing her son in a few hours.

“My son turns 20 in a few days, and when you’re special, you get lots of birthday parties,” Andreas says, referring to her son, Mac, who has Down syndrome. “He moved into a group home last year, and all the families are having an `around the world’ tour, with each family doing a country. We’re doing Italy, so I’m downloading Dean Martin, warming up lasagna and making bruschetta.”

Mac moved into the group home just before his mother embarked on a national tour of the Tony Award-winning musical The Light in the Piazza, which opened in San Francisco in July 2006.

“That show is such a very layered piece,” Andreas says. “It took a while for it to get into my bones. I found it very gratifying. It’s so spare. I want to say it’s like haiku theater, but it isn’t really. You do use few words to convey a lot. It did require me to be a better actor because you take out more, do less and convey more.”

Andreas says she would love to do the role again.

“I would surrender more,” she says about the role of a mother whose brain-damaged daughter is falling in love for the first time. “It’s like good music — the more you sing it, the less you do, the more you let it sing you, work on you. When you get out of the way, interesting stuff happens.”

Piazza, Andreas says, is more lifelike than other shows she has done, from the Broadway revival of My Fair Lady in 1976 to The Scarlet Pimpernel in 1997.

“Even though Piazza is a fable, it’s so distilled down and does so much with so little that the less you do, the more you let the grace run through you and the more honest it is,” she says. “It’s a show that is so full of love. If you do it simply, even if people don’t love every aspect of it, pieces of love come through.” 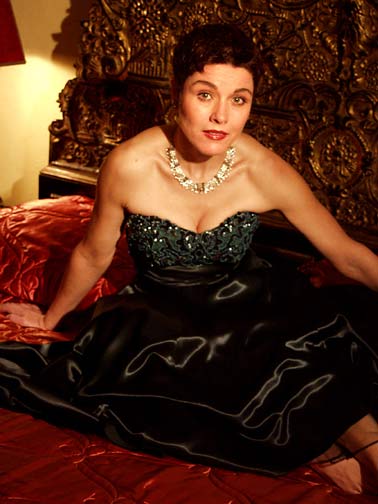 The 55-week tour ended in Chicago in July, and since returning to her home in New York’s Hudson River Valley, Andreas has been relaxing and working in cabaret.

She brings her cabaret show, Love Is Good, to San Francisco’s Empire Plush Room Tuesday for a two-week run, and her accompanist, pianist Martin Silvestri, also happens to be her new husband.

“We got married during the Piazza tour,” Andreas says. “We had some time off in Arizona, so Marty and I went and got married in Sedona. I had been courting him for 16 years.”

The newlyweds’ set list will likely include everything from “They Say It’s Wonderful” to a country-western Clint Black tune, with some Rodgers and Hart, Cole Porter, Mary Chapin Carpenter and Billy Joel thrown in as well.

“Cabaret, like everything else, can be so full of ego,” Andreas says. “At the end of the night, along with all the high notes, big notes, loud notes and pretty notes, you want to feel you’ve experienced something personal. You want to walk away with the performer’s music and something of that person. When I go see Barbara Cook, I leave thinking, `I have a little Barbara Cook in me now.’ That’s why I like the cabaret form. It scared me initially because it’s so intensely personal. Now I like it.”

Christine Andreas’ Love Is Good opensOct.2 and continues through Oct. 14 at the Empire Plush Room in the York Hotel, 940 Sutter St., San Francisco. Shows are at 8 p.m. Wednesdays-Saturdays and 7 p.m. Sundays. Tickets are $35-$40 plus a two-drink minimum. Call 866-468-3399 or visit www.theempireplushroom.com.