Here’s a sneak peek at my interview with Adam Pascal, who’s performing Oct. 27 and 28 at the Post Street Theatre in San Francisco (more info below).

Like any good blog item, there are bonus features that won’t make it into the newspaper.

Adam Pascal and Idina Menzel were friends in high school on Long Island. Well, not friends exactly, more like friendly. She was dating one of his good friends, and she was a year younger.

So what were the stars of Rent like in high school?

“In all honesty, I was cool and she was a nerd,” Pascal says on the phone from his Los Angeles home. “But she was a year younger. You know how that is in high school. She might as well have been 10 years younger.”

During those tender teenage years, Pascal was a heavy metal fan (“Judas Priest, that was my band!”) and had his very own band, which went through many names, including Wine and Vision. The band’s final name was Mute.

“I was outvoted three to one on that name,” Pascal says. And what was his choice? “Anything but Mute.”

Pascal’s rock ‘n’ roll career didn’t quite took off, but thanks to his “nerdy” friend Menzel, he got his big break.

She had already been cast in a raucous little off-Broadway musical about drag queens, artists and people with AIDS. It was called Rent, and her boyfriend at the time, mentioned to Pascal that the creative team was having trouble casting a rocker-type in the role of Roger.

If you saw Rent on Broadway or caught last year’s movie version, you know Pascal got the part and soared to fame largely on the power of his electrifying ballad, “One Song, Glory.”

Though Broadway fame beckoned _ Pascal would go on to play the Emcee in Cabaret during its long run and originate the role of Radames in Disney’s Aida _ Pascal still yearned for rock stardom. 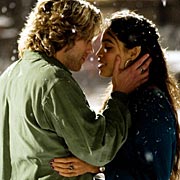 “When Rent exploded, I thought for sure this was my springboard to a major label record deal,” he says. “But it didn’t happen for a lot of reasons. Frankly, I don’t think I had the chops to do it back then. I didn’t really know who I was as a singer or a songwriter.”
He has a better idea now.

On Wednesday (Oct. 25), Pascal turned 36, and tonight (Oct. 27) he plays the first of two solo concert gigs at San Francisco’s Post Street Theatre. He’s on a concert tour that is taking him to college campuses, theaters and the odd YMCA.

The concert is just him on bass and guitar and a pianist. His repertoire comes from his two solo albums, “Model Prisoner” and “Civilian” (both on the Sh-K-Boom label), and from Broadway shows.

Of course he sings “One Song, Glory,” but he has re-imagined it as what he describes as a “haunting piano ballad with a different time signature.” He also throws in “What I Did for Love” from A Chorus Line, “Maria” from West Side Story and “Maybe This Time” from Cabaret.

“I wanted to experiment with taking Broadway tunes and drastically re-arranging them without changing their intent,” Pascal says. “A lot of times, taken out of context, musical theater material doesn’t work. I wanted to make the songs more palatable.”

Assuming the movie of Rent would be a big hit and offers would pour in, Pascal and his wife, Cybele, and their two sons, Lennon Jay, 5, and Montgomery Lovell, 3, moved to Los Angeles.

The offers didn’t pour in.

“If I didn’t have music in my life…” Pascal says, then pauses for thought. “If I was out here just trying to be an actor, I’d kill myself. It’s brutal. I feel like every audition I go to I’m at an International Male catalog call with all these super-buffed-up, super-handsome male model-looking guys. You want to be taken seriously as an actor and be judged on your talent, but that’s not what it’s about.”

But Pascal does have his music _ and his family _ and he’s doing all right.

Reflecting on his birthday, Pascal says: “I’m much, sort of, smarter and more adept at what I do than I was 10 years ago. Music is a young person’s business, but it didn’t happen for me as a young person. It’s happening to me now. It took whatever my life experiences have been for the last 10 years to acquire the skills I need to do this well. I feel I have more of those skills to be a better musician, lyricist, player, whatever. I’m finally coming into my own.”

BONUS!
If you’re interested in knowing what Pascal is listening to these days (mostly at the gym): he just downloaded the Scissor Sisters’ latest, “Ta Da,” OK Go’s latest and a group called She Wants Revenge.

For Pascal neophytes, if you’d like to sample him at his best, of course download “One Song, Glory” from Rent. Pascal himself recommends the following three tracks from his solo work: “I’m with You” and “The Ringing in My Ear” from “Civilian” and “Undiscovered” from “Model Prisoner.”

4 thoughts on “Adam Pascal: More than one song, glory”