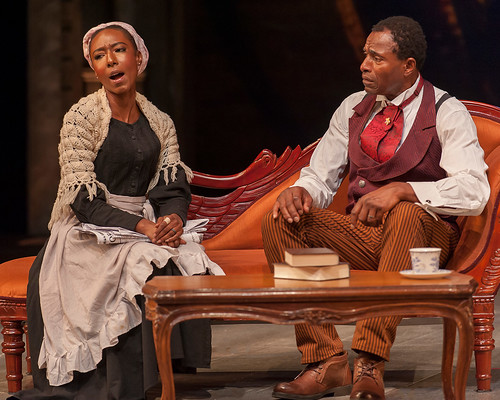 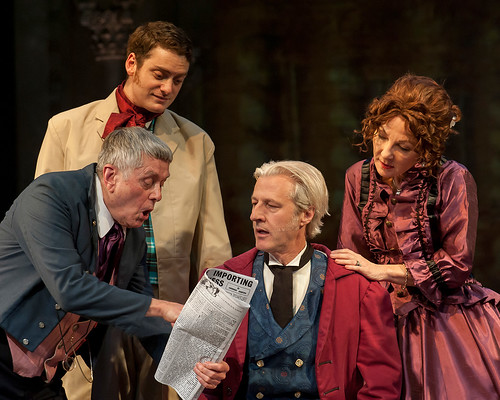 Tom McKay stars in Bugles at the Gates of Jalalabad, part of The Great Game: Afghanistan, an epic production from London receiving its West Coast premiere at Berkeley Rep. Below: Jemma Redgrave and Daniel Rabin star in Miniskirts of Kabul. Photos byJohn Haynes

Sir Henry Mortimer Durand, gazes over a map of Afghanistan and says to Abdur Rahman, the country’s Amir, “Your country is in the wrong place.”

That imagined pronouncement could have occurred in 1893, when Ron Hutchinson’s play Durand’s Line, takes place. Or it could be an echo that reverberates through much of Afghanistan’s complex and troubled history – at least the chunks of history we experience in The Great Game: Afghanistan, an extraordinary theater event now in Berkeley Repertory Theatre‘s Roda Theatre.

A hit for London’s Tricycle Theatre, a company known for connecting audiences with plays of political and historical import, The Great Game is now touring the U.S. with a three-part cycle of 12 one-act plays (and assorted interstitial monologues), all about Afghanistan from the 1800s to present day. Tricycle Artistic Director Nicolas Kent felt that all the attention was going Iraq and the war raging there with not enough focus on Afghanistan and the war raging there. So he commissioned a bunch of playwrights to write about the country, and this powerfully involving theatrical marathon is the result.

Berkeley Rep is presenting Part One, 1842-1930, Invasions & Independence on Wednesdays; Part Two, 1979-1996, Communism, the Mujahideen & the Taliban on Thursdays; and Part Three, 1996-2010, Enduring Freedom on Fridays. Then all three parts are presented in marathon viewings on Saturdays and Sundays. For opening day last Friday, we were able to see all three parts. We started at 11:30am and finished shortly after 10:30pm. Box meals are available in the theater lobby so patrons can keep their strength up, and a number of local restaurants offer prix-fixe menus to ensure that patrons enjoy a hearty meal and get back to the theater in time.

This really is a staggering event, and you have to get your head in the right place to enjoy it. We’re all so thrilled when we get to a show and the usher says, “90 minutes, no intermission.” Our collective attention span has diminished, so an opportunity to really focus in, which is what The Great Game affords us, is invaluable in many ways.

I have a certain amount of shame that I know so little about the Middle East, though the shame is not so intense that it spurs me to read a book or do independent research on the topic. I hear about Iraq, Iran and Afghanistan on the news, and a little part of my brain turns off. The same is true for movies and TV shows about the wars, although I can think of a few – Marin Theatre Company’s 9 Circles, on stage now, and the HBO movie Taking Chance –that I found incredibly moving. But I know precious little about the history and culture of the countries and their tribes. After experiencing The Great Game I feel like I know more, but the most valuable thing it offers is perspective and scope. We hear from many sides and are left with more questions than answers, which is a good thing, and we begin to see that in the marauding eyes of the British, the Russians, the Americans, the Pakistanis and certain Afghans themselves, Afghanistan, from its burning deserts to impassable mountains, truly is in the wrong place.

If I were going to see just one of the Game sections, I’d probably choose Part One because the period pieces – Stephen Jeffreys’ Bugles at the Gates of Jalalabad and Hutchinson’s Durand’s Line especially – are fascinating. They reveal the patterns that have been repeated over and over again in Afghan history and that continue to repeat. As one military man says of Afghanistan in one of the between-play monologues based on interviews, “History repeats itself with almost uncanny precision.”

While the plays as a whole create a fascinating portrait of Afghanistan – not unlike like the giant mural at the back of Pamela Howard’s simple set that undergoes several important evolutions – what they’re missing is a sense of theater.

David Edgar really gets it in Black Tulips (in Part Two), my favorite play of the bunch. Edgar offers an incisively ironic look at a distinct time period – 1981 to 1987 – from a distinct point of view – the Soviet military, first invited into the country then driven from it. There’s dark humor at work here as we start with dispirited commanders addressing young recruits in 1987 then work backward through time to a much more hopeful start in 1981. Colin Teevan’s The Lion of Kabul also takes advantage of the stage by setting us on edge with what we can’t see but can hear, namely a hungry lion in the Kabul Zoo.

David Greig attempts a theatrical gimmick in Miniskirts of Kabul, which offers a rare meaty role for a woman (Jemma Redgrave as a nameless writer) confronting Najibullah (Daniel Rabin), the former Communist leader of Afghanistan whom she meets while he’s under house arrest in UN headquarters. It’s a potent duologue that unspools as bombs are falling all around, but the whole notion that it’s taking place in the writer’s imagination comes off as callow and ridiculous. Greig does, however, get points for attempting to lighten the generally dour mood of the plays by injecting some Spice Girls nonsense.

It’s interesting to see 12 plays in succession like this because it really does offer a glimpse into the art of playwriting. So many traps to fall into, so many challenges in turning political diatribes and historical lessons into actual drama. Lee Blessing gets terribly heavy handed in Wood for the Fire (which also features some appalling American accents by the British cast), and Joy Wilkinson’s Now Is the Time feels like a soapy British TV movie about any generic ruler trying to flee his country and getting stuck in the snow.

Directors Kent and Indu Rubasingham have shaped a fascinating, if uneven, push through Afghanistan. They’re utilizing the power of theater to enlighten us and enlarge our viewpoint. But they don’t take full advantage of pure theatricality to engage our emotions and imaginations in addition to our analytical and inquiring minds.

After playing The Great Game, you definitely won’t think of Afghanistan in the same way, though there’s a sense of hopelessness surrounding all enterprise there that’s hard to shake. And if you’re really paying attention, it seems like there’s a pressing chapter that will need to unfold next – The Great Game: Pakistan.

There will also be a panel discussion, Representing Afghanistan: The Great Game, at 6pm, Thursday, Oct. 28 in the Roda Theatre. Simon Gammell, director of the British Council West Coast moderates, and the panel includes Dr. Qayoumi, research scholar Nushin Arbabzadah from the UCLA Center for the Study of Women and Rona Popal, executive director of the Afghan Coalition.