If the name Tom Hulce sounds familiar, it’s probably not because he’s one of the Tony Award-winning producers of the musical Spring Awakening. He rings that familiarity bell because he has one of the world’s most famous giggles. In 1984, he played Wolfgang Amadeus Mozart in the movie Amadeus and received an Oscar nomination. Or, perhaps the less cultured among us remember him as Pinto in Animal House.

Hulce, 54, still acts occasionally but he’s more of a producer these days. While producing the 2004 movie A Home at the End of the World, Hulce discovered that his director, Michael Mayer, and the soundtrack composer, Duncan Sheik, were working on a musical adaptation of a controversial German play called Spring Awakening with writer Steven Sater.

Hulce agreed to join the team as a producer, and that decision led him to the 2007 Tony Awards.

Did that night at the Tonys remind you of being at the Academy Awards?

What do you think that means?

Hulce: I’ve been extremely lucky. That’s what it means.

Why do you think Spring Awakening, which is essentially a late 19th-century teenage drama infused with a 21st-century pop-rock concert, has been such a huge hit?

Hulce: There is universality in the subject matter and this time in everyone’s life. Whether you’re 15 or 70p, a parent or a child, the show offers a different point of entry, a point of connection to the story. By the end of the evening, this commonality of experience accumulates so that everyone becomes one by the end. There’s something so satisfying about that. And then there’s the fact that the musical moments created by Duncan and Steven allow a kind of articulation and exhilaration that isn’t available in the real world of the story. There’s a kind of guilty joy in witnessing those kinds of moments. Duncan’s music is so amazingly melodic and Steven’s words are so poetic that you can really sense the darker moments underneath.

Is it inevitable that there will be a Spring Awakening movie musical?

Hulce: The negotiations are ongoing for the film version. It’s such an interesting prospect because everything that is so essential and unique about the musical is theatrical, about being in the room with the young people and feeling the excitement when they pull a microphone out of their school uniform. It’s interesting to talk about a cinematic equivalent.

The national tour of Spring Awakening launches in San Francisco with two leads from replacement casts on Broadway. How hard was it to cast the tour?

Hulce: Because people know what Spring Awakening is now, unlike when we started, we had interest from all over the country and assembled an incredible cast. We’re in love with this cast. And we have more casting to do because we have productions coming in London, Germany, Tokyo, Seoul – all these very different cultures around the world finding something so compelling about the story. This is so far beyond what I would have dared to dream.

For information about the Spring Awakening tour at the Curran Theatre, running through Oct. 12, visit www.shnsf.com. 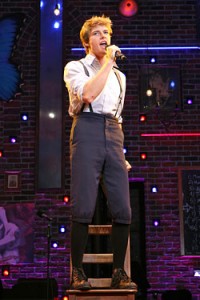