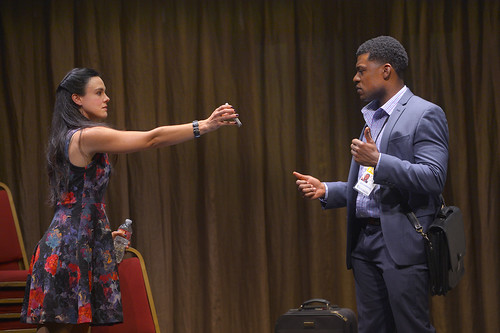 Maddie (Jessica Lynn Carroll), the daughter of a presidential candidate, reveals a secret to journalist Will (Richard Prioleau) in TheatreWorks Silicon Valley’s world premiere of Confederates by Suzanne Bradbeer. Below: Will commiserates with fellow journalist Stephanie (Tasha Lawrence) about the pressures of covering the campaign trail. Photos by Kevin Berne


Feels like we’ve been in an election cycle for at least a decade and we haven’t even gotten to the conventions yet. This particular cycle has been grueling for many reasons, not the least of which is the scarcity of in-depth, trustworthy journalism and the abundance of talking heads opining, bloviating, sniping and slathering more opinion on their opinion. It’s exhausting and, for the most part, unilluminating, dispiriting all part of the noise cloud surrounding the noise cloud of the candidates themselves.

Such is the landscape of Suzanne Bradbeer’s Confederates, a thrilling world-premiere drama from TheatreWorks Silicon Valley now at the Lucie Stern Theatre in Palo Alto. Developed, in part, at TheatreWorks’ New Works Festival, this three-person one-act slices into the heart of modern politics and journalism. Bradbeer comes from a realistic perspective in terms of the degradation of modern journalism and the obfuscating chaos surrounding a presidential campaign, but she might rely on types – the noble young journalism, the crusty older journalist, the naive candidate’s daughter – those types deepen into characters with depth, complication and easily relatable flaws, ambitions and conundrums.

A senator is emerging as a presidential candidate with real potential, and among the pack of journalists following him on the trail are two writers from the same newspaper: Stephanie (Tasha Lawrence), an experienced journalist who knows how to play the game (and how is so good she was recently offered a buy-out from her paper) and Will (Richard Prioleau), a novice reporter hoping this short-term gig turns into something permanent.

The buses and generic hotels of the campaign trail are folded neatly into Andrew Boyce’s revolving set, which helps director Lisa Rothe maintain a steady rhythm as she builds momentum in a plot that begins to resemble a high-stakes thriller with very human stakes. It seems that Will has a sort of ace up his sleeve because he knew the candidate’s daughter, now a senior in college, when they were in summer camp together. When the daughter, Maddie (Jessica Lynn Carroll), shows up to join the campaign, she recognizes him immediately and even admits she had a crush on him at camp. 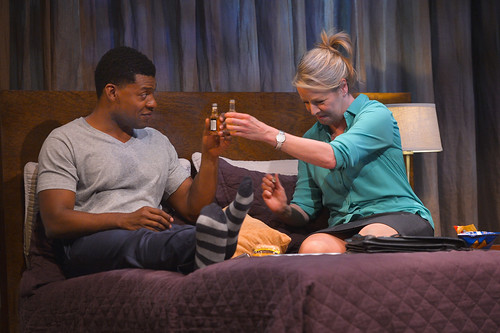 In short order, Maddie makes the mistake of seeing Will as a friend first and a journalist second when she lets him in on a secret that has been troubling her. It seems that an angry ex-boyfriend has texted her a potentially damaging photograph of Madde wearing nothing but a Confederate flag. Being a smart reporter and a compassionate human, Will quickly sees how things could unfold and encourages Maddie to get ahead of the story and let her father’s campaign create a plan to react and recover. First things, first, she should sit down for an interview with him and then bring in her parents.

Maddie reacts emotionally and refuses all of Will’s suggestions. The boyfriend who texted her the photo has promised not to text it to anyone else (but he then texts it to Will, so…) and everything will be fine. The photo is completely out of context and has to do with her rebellious (and possibly drunken) reaction to an adviser telling her that she can’t write a thesis on Harriet Tubman because she’s white. So Maddie starts thinking about her own heritage and what she can write about, and being a Virginian and with family who fought at Gettysburg and all that, her instinct is to mess with the iconography of America’s racist history.

But as Maddie and Will both know, the high-minded artistic context for the photo will be ignored by the general public, and all they’ll see is a naked girl in a Confederate flag. She’ll be ripped to pieces across the Internet, and whatever she does in life, she’ll always be associated with that photo, which Will could simply delete if he so chose.

Will, an African-American man with his own feelings about the Confederate flag, fully understands the extraordinary scoop he has on his hands, and Stephanie, who is, in essence, a mentor and a rival, is pushing hard to get him to write the story immediately and even inserts herself into the narrative by alerting their editor about what he has.

The tension mounts beautifully, and the weight of American politics, the ethics (and importance) of responsible journalism and the ever-complicated issue of race in this country all come into play. The race aspects, in particular a speech Will delivers about his parents sitting him down as a child and having “the talk” with him about how to deal with certain situations, are even more resonant in some ways now than the political tumult. Happily, Bradbeer never lets us lose sight of these characters as people facing difficult and troubling choices, and the actors convey that complexity and all the humor, torment and ferocity it entails.

The ending, however, doesn’t feel quite right. There’s a certain niceness to the conclusion that, sadly, feels at odds with reality. Where we expect a sting, we get sentiment involving fathers doing their best to protect their daughters. Given that we never meet Maddie’s father the candidate, this personal moment feels smaller than the broader national landscape we’ve just been traversing and prevents a truly exciting and provocative drama from sticking its landing.