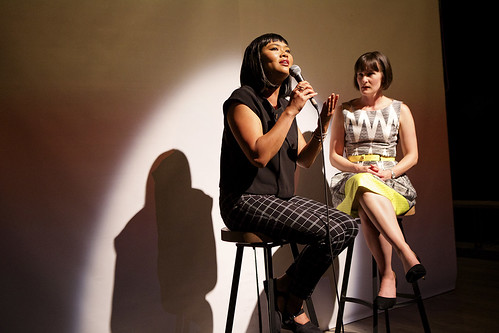 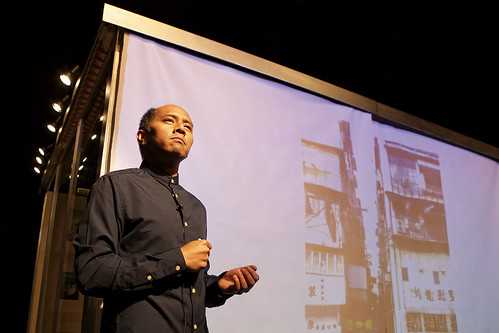 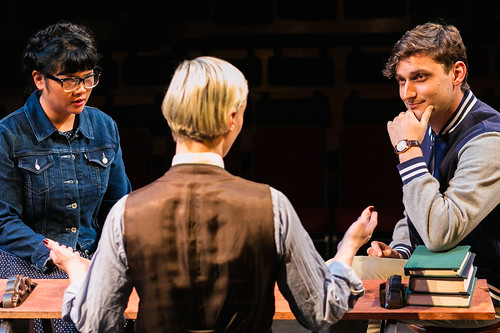 
When it comes to the rituals of the New Year – making and abandoning resolutions, vowing to live more fully and with intention, trying not to let time slip away so quickly by living more fully in the present – the most powerful thing you could do for yourself is head over to the Ashby Stage in Berkeley and see Shotgun Players’ excellent production of Thornton Wilder’s Our Town.

This 1938 masterpiece has long been my favorite American play, and aside from its structural genius, its Expressionistic (and still unmatched) theatricality balanced with genuine emotion, Our Town is the self-help book embedded in our nation’s consciousness. I’ve seen the play dozens of times in straightforward productions (like Shotgun’s) and over-produced and over-thought re-imaginings, in musical and film versions, in schools and on the professional stage, and every time I come away with something new. More than any other, I feel Our Town in other works when they succeed in connecting audience to play or when they tap into simple truths that need constant reiteration about what the hell we’re even doing on this planet.

If I could start every new year with a production of Our Town as engaging and as powerful as director Susannah Martin’s, I would gladly do so. The holidays, and especially New Year’s, are a time when we’re prone to being more thoughtful and retrospective anyway, so we’re already primed for Wilder’s musing on time, memory and cracking the shell of what we know as everyday life. Walking into the Ashby Stage (a former church whose pews have become increasingly more comfortably in Shotgun’s tenure there) at this time of year, we’re ready for Wilder to bring it all on: the prosaic, the nostalgic, the poetic, the awesome, the mind-blowing, the heart-wrenching – all the malleable gunk that joins each moment of our lives to another and to each other. 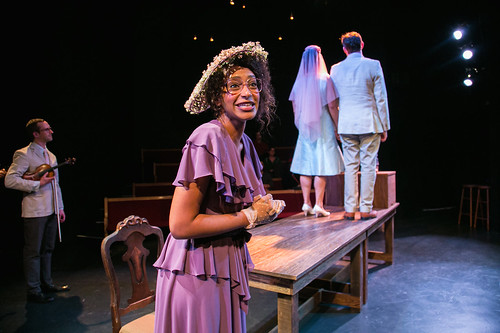 In some ways, with this play, you need to set it up, let it go and get out of the way. Martin, her designers and cast, do that with their own smart, deeply felt choices. The performance space itself, as designed by Nina Ball, has a huge impact on the play before it even starts. Where there’s usually a stage there are now audience members. The stage where the actors do their work is now more in the center of the room, although in another canny move, actors spend a lot of time sitting in and moving through the audience. There’s very little division between audience and play, which is just as it should be.

Ball and lighting designer Heather Basarab dangle bare bulbs the length of the entire theater, casting a warm glow and making the audience quite visible for much of the play. If part of the play’s effect is creating a sense of community in a vast universe, Martin and her crew do a beautiful job of allowing that to happen.

Madeline H.D. Brown strikes a match and lights her pipe as she begins, in her role as Stage Manager, to tell us all about Grover’s Corners in 1901. She’s a wise and trustworthy guide through this case study of small-town American life as microcosm for human existence. There’s no phony New England crust to her, which is a relief, but she retains a healthy sense of detachment and humor.

That no-nonsense attitude filters down through the entire cast. Tim Kniffin makes an especially strong impression as a thoughtful Doc Gibbs. In a scene where he chides son George (Josh Schell) for not helping his mother more, Kniffin turns a scolding into something much more emotional between father and son. It’s a powerful moment when George’s ego gets its first check – he gets another ego smackdown from neighbor Emily Webb (El Beh) that is so effective he marries her.

Hardworking mothers (Michelle Talagarow as Mrs. Webb and Molly Noble as Mrs. Gibbs) keep the world spinning, choir practice keeps the gossip flowing (especially when the topic is the tippling of Simon Stimson (Christopher W. White,one of those suffering souls not meant for small-town life) and weddings and funerals keep the community tightly knit. In other words, it’s all pretty ordinary in extraordinary ways, and then, in Act 3, one of the most wondrous pieces of writing in American drama, Wilder takes a leap of imagination that remains staggering in its effect. Everything he has done in the play up to this point comes into play and brings everything together. We go from mundane to cosmic in an instant and never go back.

In three acts over 2 1/2 hours, this Our Town never lags and never panders. It’s sharp at some points, poignant in others, devastating and inspiring. It’s filled with the friction of warm memory crashing into harsh reality, made all the more powerful under the light of the stars.

FOR MORE INFORMATION
Thornton Wilder’s Our Town continues through Jan. 25 in a Shotgun Players production at The Ashby Stage, 1901 Ashby St., Berkeley. Tickets are $20-$30. Call 510-841-6500 or visit www.shotgunplayers.org.