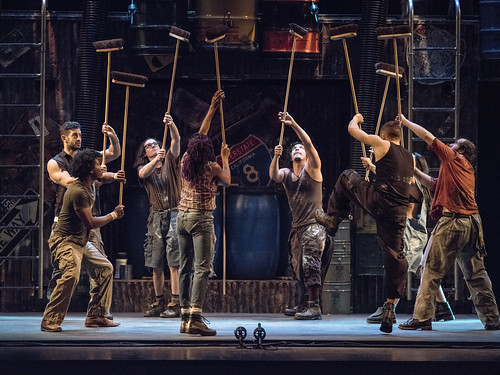 The wildly enjoyable percussive dance/spectacle STOMP is back in San Francisco after a seven-year absence, but only for a few performances at American Conservatory Theater’s Geary Theater. Photos by Steve McNicholas


Recently, I was rhapsodizing about STOMP the extraordinarily long-lived theatrical experience that is at once performance art, musical performance, dance show and tourist pleaser. Created nearly 30 years ago at the Edniburgh Fringe Festival by Steve McNicholas and Luke Cresswell, the show operates on the basic premise that the basic human need for and love of rhythm can turn anything into music. On a STOMP stage, performers turn everything from brooms to matchboxes to inner-tubes to kitchen sinks into rhythm delivery systems.

When I said that I admired how exuberant and consistent STOMP has been through the years, the friend I was talking with asked if I felt the show were a guilty pleasure, implying somehow that because it’s popular and long-lasting that it didn’t quality for the rank of respectable art. I guess when a show has played the Vegas strip, been turned into IMAX movies, performed on big awards shows and become an international brand, that kind of thinking is understandable.

But here’s the thing: STOMP is amazingly well performed by highly skilled dancer-musician-clowns who end up playing the audience as well as they play their garbage cans, their plastic hoses and their bodies. These are artists working at a fever pitch to not only please an audience but also involve them in the primal thunder they are creating on stage. The show that McNicholas and Cresswell have crafted for them, which features classic and new routines, is so solid that there’s no way the audience isn’t in pulse-pounding rapture by the end of the nearly 100-minute show. There’s certainly no guilt in any of that. 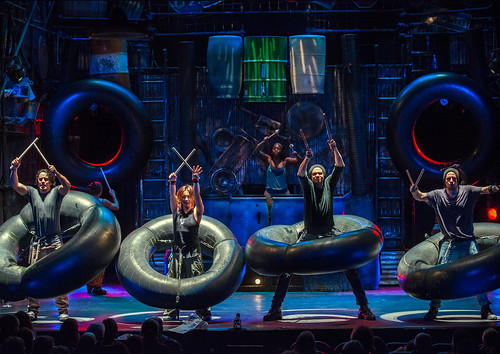 And, it bears mentioning, that one of my favorite assignments when I was a writer for the Bay Area News Group was being trained by members of a STOMP tour to learn portions of several routines. They were incredibly patient, I was incredibly clumsy, and it was a blast. You can read the story here.

After a seven-year absence, STOMP has returned to San Francisco, but only for five days at American Conservatory Theater’s Geary Theater. This touring production is top notch, and the two new routines – one involving rolling suitcases, the other involving a musician playing a vortex of objects in motion – are thrilling. My favorite routine is still the one involving the shopping carts (albeit a heavy-duty STOMP-ified version of shopping carts) because it is at once beautiful – the music the carts makes can be gentle and soft and head-poundingly loud, sort of a transition from New Age to heavy metal – and savage. The performers SLAM the carts into one another (in perfect rhythm, of course), creating an industrial-strength symphony that feels as creative as it does destructive.

The other routine that always blows me away is the one with hose pipes, a sort of soft plastic hose that makes a beautiful sound when slammed on the floor, a sound that resembles a plucked string. Pipes of different lengths strike different notes, so when the eight cast members begin pounding the pipes as it were, the resulting sound – like the entire show itself – is sublime.

[bonus interview]
I talked to STOMP creators Steve McNicholas and Luke Cresswell for a feature in the San Francisco Examiner. Read the story here.

Yes, Theater Dogs is on the road. We’re in Las Vegas for the opening of Jersey Boys, one of our favorite shows.

So we decided to come a few days early, drink in the wonders of the Palazzo (the hotel where JB is housed and a sister hotel to the Venetian). Gorgeous suite rooms. Ours has a view of Steve Wynn’s golf course next door (and of the Las Vegas Monorail, which can’t help but remind me of Disneyland — oh, if only Disney were in charge of Vegas!).

So last night we ambled down the Strip to the Planet Hollywood hotel to see Stomp Out Loud. Now I had seen Stomp multiple times when it ran and ran at San Francisco’s Marines Memorial Theatre. I even got to rehearse with one of the casts and learn a couple of the routines (involving brooms, barrels, garbage can lids and swinging from the junk walls).

The Vegas version of Luke Cresswell and Steve McNicholas’ enduring hit is, as you might expect, bigger and better than your average Stomp. Yes, they’ve got all the requisite elements: the broom symphony, the feet attached to metal drums, the unbelievable energy. But everything is now amped up a few notches — not crazily, mind you, but enough to compete with the Cirques and the ’70s superstars (Bette Midler is off this week and Cher doesn’t start til next week, and who knows what Elton John is up to — is Las Vegas where the ’70s go to die?).

The cast is still the most diverse you’re likely to see — diverse in sex, ethnicity, body type — and that defining Stomp-ness, that rhythm is an undeniable part of our humanity and that if you bang on anything artfully enough, it turns into music.

The star of the show, at least the night we saw it, is Cam Newlin, a hefty Iowa native and graduate of my two favorite schools: Reno High School and the University of Nevada, Reno, and he’s a marvel, a walking percussive genius who makes music in everything he does. He gets comic support from Leilani Dibble and a cast that translates their musical and dance ability into an irresistible fusion of high-energy fun. This is spectacle without fuss. It’s real, it’s elemental and it’s got a beat that simply can’t be beat.

In Vegas terms, it’s a nice antidote to the “high art” of all the Cirque du Soleil shows, where there’s a huge space between performer and audience (artistically and physically). Stomp Out Loud is down and dirty, rhythmic in all the right ways and funny without pandering. Can’t ask for more than that in a city of such excess.

For information about Stomp Out Loud in Las Vegas, visit the official site here.