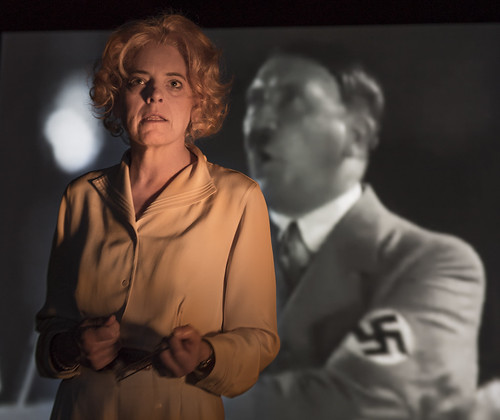 Leni Riefenstahl (Stacy Ross) ponders her relationship with Hitler in Aurora Theatre Company’s Bay Area Premiere of Leni by Sarah Greenman. Below: Older Leni (Ross, left) has a tête-à-tête with her younger self (Martha Brigham). Photos by David Allen


As a dramatic work, Sarah Greenman’s Leni about the German filmmaker Leni Riefenstahl, has to juggle history, artistry and, now, discomfiting parallels to our own time. Was Riefenstahl the right artist at the wrong time? Was her extraordinary talent as a filmmaker overshadowed by Hitler and the Nazi party? Or was she a Nazi sympathizer and, consequently, as the show puts it, “a willing architect of Nazi mythology” and, worse, an accomplice to genocide?

There aren’t any easy answers in this 85-minute one-act play now at the intimate Harry’s UpStage space at the Aurora Theatre Company. Director Jon Tracy and actors Stacy Ross and Martha Brigham, both of whom play Riefenstahl at advanced and early ages respectively, grab hold of the play with gusto and shake it for all it’s worth.

When a biographical play is set in some enigmatic limbo between life and death, the conceit usually comes across as a lazy way to make excuses for bringing back the dead and placing them awkwardly in a biographical drama. But here, it works. It is 2003 and Riefenstahl (Ross) has just died at 101. She emerges from a room into a phantom movie set (simply but effectively designed by Nina Ball) and gets to work filming scenes from her life. She shoots a scene of her younger self (Brigham) meeting with Hitler to beg for more money to complete her two-part documentary Olympia about the 1936 Berlin Olympics.

Evocatively using lighting that is by turns stark and shadowy (beautifully designed by Kurt Landisman), director Tracy is able to create movie/theater hybrid that makes sense. They’re not really making a movie, but they’re not really alive either. What we have is Greenman’s attempt to allow Riefenstahl to put herself on trial, to explain herself, to attempt to face the truth, to justify never apologizing or recanting, to accept responsibility for the part she played. 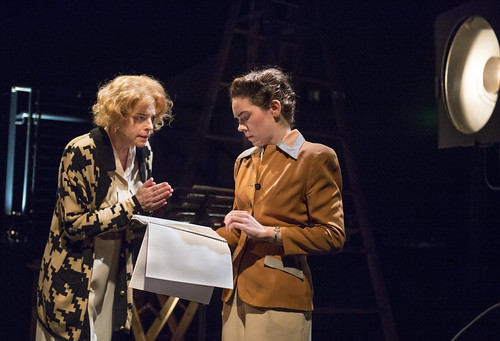 Leni is in no way an apology for Riefenstahl. No matter her artistic ambitions or intentions, she was complicit with the Nazis, and that landed her squarely on the wrong side of history and understandably destroyed her career. Rather, the play is Riefenstahl wrestling with herself and attempting to establish some context for what is was like to be in the middle of it all, attempting to make great work (and Leni did truly believe her work was great – with Triumph of the Will she says she didn’t create propaganda, she created a masterpiece), maintain her artistic integrity (she says she was never a member of the Nazi party and no one ever interfered with her filmmaking) and play the political games that would keep her working (she and Hitler were friendly – he gave her gifts – but she and Goebbels did not get along).

Because she lived so long, Riefenstahl is able to offer an interesting perspective on her work. With her bold filmmaking techniques, she was decades ahead of her time and, as many would attest, set the standard for sports documentaries with Olympia. All the controversy surrounding her work with the Nazis tends to obscure her skills as a director and render her a villain rather than a visionary filmmaker. The footage we see from her films (sound and video design by Theodore J.H. Hulsker) is absolutely mesmerizing, especially some of the montages of Olympic athletes (oh, the divers!). So when the older Leni proclaims, “I am on trial for creating the modern world!” her sense of self or her impact doesn’t seem as overblown as it might.

Asked why she didn’t condemn Hitler’s ethnic cleansing, Riefenstahl claims she, like so many Germans, especially those who believed in Hitler as the leader Germany needed at the time, simply didn’t know. All those rumors and stories purported by journalists about death camps were lies. Until they weren’t and – much too late in the game – she had to face the harsh facts. Does she love the work she created, she is asked? Yes. And does she regret it? Yes.

So where does that leave us with the complicated Leni Riefenstahl? Mired in complications, with probably more complications than Greenman’s drama allows. Ross and Brigham are, as usual, superb, and director Tracy’s production is able to cut through a lot of the corny docu-drama trappings and let all the thorny issues encompass audience and actors alike. Amid the specific details of Riefenstahl’s life, certain chilling elements echo – fake news! lying journalists! obliviously adoring crowds! dangerously narrow-minded nationalism! – and make us wonder who, some time from today, will we see as a Leni Riefenstahl among us now?

FOR MORE INFORMATION
Sarah Greenman’s Leni continues through May 10 in the Harry’s UpStage space at the Aurora Theatre, 2081 Addison St., Berkeley. Tickets are $45-$55. Call 510-843-4822 or visit www.auroratheatre.org.