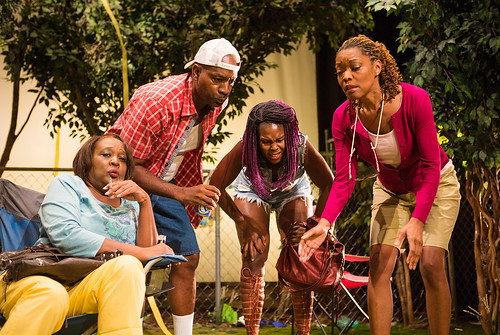 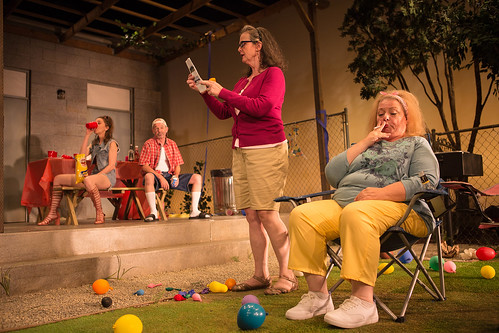 Timothy Douglas is brining a sense of authenticity to his duties as director of Good Breeding, Robert O’Hara’s wild adaptation of Aeschylus’ Oresteia. The production, which features American Conservatory Theater’s Class of 2009 MFA students, is set in a world not unlike Studio 54 in its heyday. And it just so happens that Douglas actually worked at the famously decadent Studio 54.

As a college student on the technical theater track, he was brought in to clean the lighting instruments and was then hired on as the follow spot operator.

“I remember working Bianca Jagger’s 40th birthday party,” Douglas says. “During certain parties we were instructed to feature certain people in the spotlight. I’m not sure if people paid extra for that or what.”

Douglas worked at Studio 54 for about 2 ½ months. “Then everyone went to jail,” Douglas says with a laugh. “I had actually forgotten about all that – it happened when I was a tot – but then I read Robert’s script, and in deciding how to frame the insanity of this play, I had these flashbacks.”

Good Breeding, which previews tonight (Friday, Oct. 10), opens Saturday, Oct. 11 and continues through Oct. 25 at the Zeum Theater in Yerba Buena Gardens, turns the House of Atreus upside down and does what the Greeks hardly ever did: gives us the woman’s point of view.

“Robert had distilled the story down to the iconic events,” Douglas explains. “We’re more focused on Elektra, Clytemnestra and Helen. The women get blamed for all these tragedies and they’re not really in the plays that much. Let’s turn that around. There’s a whole other truth to tell.”

The Studio 54 concept came up when Douglas was thinking about the human interaction with the gods in the original Greek drama. Then he though of the celebrity/lay person encounters he witnessed at Studio 54. Oresteia is of course filled with murder and sacrifice, but Douglas insists there’s very little in the play he didn’t see going on at Studio 54. “I didn’t actually see murder, but I did see the bodies carried out,” he says. “Carried out the 53rd St. exit.”

The swirl of debauchery and deal making in O’Hara’s play calls for a certain amount of nudity. O’Hara was willing to forgo the flesh if the goals of the scenes were met. But the students were willing to go full monty for their art.

“They are fearless and I’m the one who’s blushing in rehearsal,” Douglas says. “I always want to make sure I’m not taking advantage, not sensationalizing anyone. I don’t think it’s what this play is doing. I never had to question that with this group. But in some ways they may be going too far if I can judge by my blush factor.”

Douglas directed and taught at the ACT Conservatory for many years before launching into a directing career that has taken him to theaters around the country. His home base is Brooklyn, but the life of an itinerant director means he hardly sees it. He was last in the Bay Area as a director for Berkeley Repertory Theatre’s 1998 production of Valley Song by Athol Fugard.

From his work with the ACT students and their mash-up of Greeks and late ’70s decadence, he’s heading to the University of Michigan to work on a production of Jane Austen’s “Pride and Prejudice.” If he’s too heavily influenced by the show he just worked on, the Austen characters may be in trouble.

“I hope I can control myself,” Douglas says, the grin implicit in his tone of voice. “I’ll be working with undergrads, so I’ll need to clean up my act.”