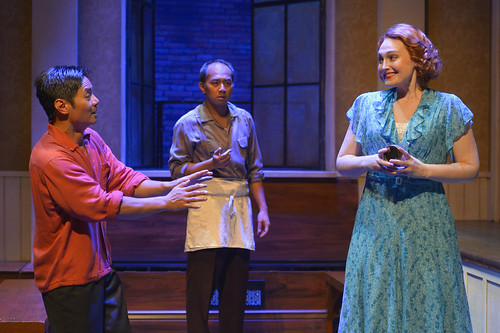 The results make up the double bill Monstress now at the Strand, and while both plays, under the emotionally astute direction of ACT Artistic Director Carey Perloff, are enjoyable, one feels like a much more stage-worthy enterprise while the other comes off as more of a light sketch.

The latter, San José’s Presenting…the Mnstress!, concludes the 2-hour and 15-minute evening, and that, unfortunately, dissipates the power and impact of the first play, Gotanda’s riveting Remember the I-Hotel.

San José stars in his play as Checkers Rosario, a Manila filmmaker who specializes in schlocky D-grade horror movies starring his girlfriend, Reva Gogo (the wonderful Melody Butiu). Deluded by dreams of Hollywood glory, Checkers can’t see that his talents don’t really lie in filmmaking, and just when it seems like reality is catching up to his delusion, a visitor from Hollywood arrives to open doors to cinematic stardom. So Checkers and Reva are off to California, but it turns out that Gaz Gazmann (Nick Gabriel) isn’t really a Hollywood mogul. He’s makes terrible movies in the basement of his mother’s San Mateo home. 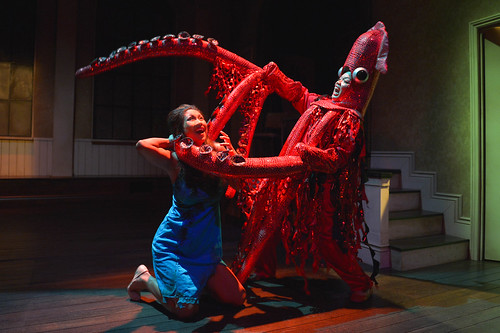 There’s fun to be had with the silly ’70s horror movies being made (the costumes by Lydia Tanji are a hoot), and Butiu gives a full-bodied, emotional performance as a woman caught between the man she loves and his fragile ego. But there’s not much there there, as they say. A sort of Greek chorus of Checkers’ fans tells the story and plays supporting roles, but this device tends to make the play seem sillier than it actually is.

This slight play is also done no favors following the evening’s first play, the emotionally resonant, utterly compelling Remember the I-Hotel. The story is based on an incident from San Francisco history – the razing of the International Hotel in 1977 and the displacement of its mostly Filipino inhabitants – but Tenorio and Gotanda tap into a story that transcends historical connection.

Bookended by the public demonstration and police presence that accompanied the 1977 evictions, the story takes place primarily in the 1930s, when San Francisco’s Manilatown was full of Filipino clubs and restaurants. In one of those clubs, a dance hall (beautifully rendered by set designer Nina Ball and versatile enough to evoke a number of locations), bellhop Vicente (Ogie Zulueta) meets migrant farmworker Fortunado (Jomar Tagatac) taking a break from the Stockton asparagus fields. The two don’t immediately hit it off, but once Vicente nicknames his new friend Nado, they’re practically inseparable. They become roommates at the I-Hotel, and Vicente gets Nado a job at the hotel where he works.

Friendship quickly turns to love, or at least it does for Nado, but Vicente’s head is turned by Althea (Kelsey Venter), a white maid at the hotel (her race factors into the plot). Tension and betrayal follow, and once the action shifts back to the ’70s, we understand a great deal more about Vicente and Nado and the harshness of the eviction they’re facing.

Zulueta and Tagatac are astoundingly good in their roles, so much so you want to spend more time with their story and its complexities. All the while their story unfolds, Butiu appears behind a microphone on the small dancehall stage and sings standards like “The Very Thought of You” and “Wild is the Wind,” all a cappella. Her voice is gorgeous, and the songs lend a romantic and wistful underscore.

It’s a sad but somehow beautiful play, and it feels substantial to the degree that Presenting…The Monstress! feels frivolous. And that makes for an interesting but even experience.

Another week, another Berkeley Repertory Theatre show going to Broadway.

Carrie Fisher’s autobiographical solo show Wishful Drinking, directed by Berkeley Rep artistic director Tony Taccone, will open in October at — where else? — Studio 54, where it runs through Jan. 3. The show is produced by Roundabout Theatre Company in association with Jonathan Reinis, Jamie Cesa, Eva Price, and Berkeley Rep.

“This is the culmination of a long process,” Taccone said in a statement. “Berkeley Rep has a history of developing new work and, with our commissioning program, continues its commitment to bring fresh ideas and alternative viewpoints to the stage. I am pleased with the success of this project, and honored to collaborate with all of the people involved to bring this show to Broadway. It has been truly gratifying in recent years to see our shows reach a wider audience in New York, Los Angeles, London, and other cities.”

A quick note to alert Bay Area folks about an interesting opportunity coming right up.

On Friday, April 18 and Saturday April 19, Campo Santo is opening up its rehearsal process to give audiences a peek into Bay Area playwright Philip Kan Gotanda’s new play, #5 The Angry Red Drum at Intersection for the Arts.

This is part of Campo Santo/Intersection’s Open Rehearsal and Open Process Series exploration. Presented in collaboration with the Asian American Theater Company, Gotanda’s play is set in an apocalyptic world and addresses the effects of war on our psyches and culture.

Make reservations at www.theintersection.org or call 415-626-3311 for information.