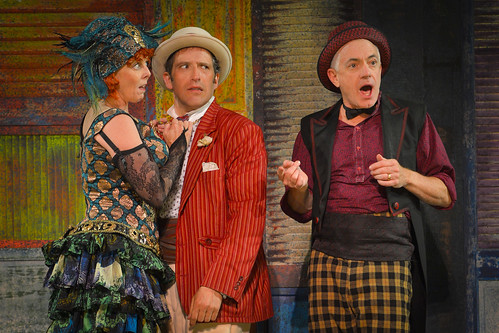 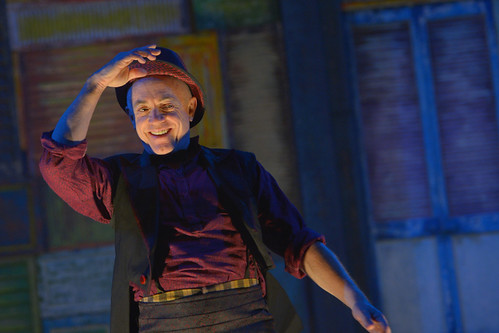 Patty Gallagher is a gun-toting Winnie in the Cal Shakes production of Happy Days by Samuel Beckett. Photo by Kevin Berne

In the world of live theater, you never know from where the drama will come.

For California Shakespeare Theater artistic director Jonathan Moscone and his production of Samuel Beckett’s Happy Days, there was already a certain amount of drama in the choice of the play – the first time Moscone had tackled Beckett and the first time Beckett would be performed in all the outdoor glory of the Bruns Amphitheater.

As a way to counteract the risk of doing an essentially one person play (one person who, by the way, is stuck in a mound of muck for the entire play), Moscone cast Oscar-nominee Marsha Mason, one of those comforting and familiar actors we’ve watched, admired and enjoyed for years. Add a little celebrity pizzazz to a play potential patrons might not know much about and you have a theatrical event.

But oh, the drama. Deep into the rehearsal period, Mason had to exit the production for, as the theater company put it, “personal reasons.” Suddenly the event is now back to the red zone of risk.

In steps Patty Gallagher, an associate professor of theater arts at UC Santa Cruz. Where patrons might have said, “Marsha Mason, how wonderful,” they now say, “Patty who?”

Well Patty Gallagher is a hero for stepping into a difficult role in a difficult play (a role she’d done before and a play she teaches) and even more of a hero for a performance that is full of life and a kind of joy you don’t expect in a Beckett musing on mortality. The valiant effort is applause-worthy enough. But what she does with the role goes beyond heroic. She’s a revelation.

Moscone and his company embraced the drama in a way that actually enhances the experience of watching the play. More specifically, Moscone began blogging about directing the show, about Mason’s departure and about working with Gallagher and her co-star, Dan Hiatt, who appears intermittently but is essential to the power of the play. In a frank and open way, Moscone exposes the stress of the experience but also the support he received and the depth he was able to reach with Gallagher and Hiatt. Here’s a sample of Moscone writing on Aug. 3 in an entry titled “I’m nervous but I’m in love”:

“Have frankly been quite exhausted, physically that is, not mentally or spiritually, from this week’s work. But I have to say, I am in a place I thought I’d never be. I cherish this project in a way that surpasses any other piece I have worked on in my life. Partly it’s the events of the week that make me feel more connected to this piece than perhaps to other plays that haven’t seen themselves through a real crisis-turned-opportunity. And a great part is this play. Patty (Gallagher) makes me love this work and have a deep emotional connection to Beckett, something I thought would never happen.”

Knowing what went on behind the scenes adds an extra layer of excitement to the play, and that layer underscores what Beckett already seems to be driving at: amid all the garbage, mud, dirt and pain of life, we can choose to view all of it with gratitude, through our connection to others and with the simple joy of being alive. That’s what I took away from Gallagher’s ebullient Winnie, a formally dressed woman stuck up to her waist in a dirt mound (Todd Rosenthal’s set pours right off the Bruns stage and into the audience).

Winnie wakes in the morning at the sound of a piercing bell, performs the routine that sustains her, attempts to chat with her husband, Willie, who lives in another part of the dirt mound, and tries valiantly to find things to be cheerful about, whether it’s memories, a mumbled word from Wilie or the pleasure of language itself. She is quite literally being buried alive (in Act 2 she’s buried up to her neck) but she is more alive than many of the people we know.

I have often found Beckett intimidating – the gnawing sense of not getting it tends to destroy my ability to enjoy the play. But several Beckett productions stick in my mind as having helped me relax enough to really listen and experience Beckett – one was Cutting Ball Theatre’s Krapp’s Last Tape earlier this year. The other was years and years ago, in a small theater at the Central YMCA in San Francisco’s Tenderloin. Hiatt co-starred as Lucky in Waiting for Godot, and he was brilliant. Dennis Moyer directed the production for Fine Arts Repertory Theatre, and it starred Joe Bellan and John Robb.

That hugely enjoyable production was the first time I realized that Beckett could be equal parts brilliance and boredom, entertainment and brain-stretching philosophy. That’s what Happy Days is, and it also feels like therapy for our world at this particular moment in history. May we all be as lucky or as resilient, as resourceful or as valiant as Winnie and, like her, go down singing.

Backstage drama, onstage drama – it’s all the same thing when it feeds the audience and gives us more to muse upon. There’s a happy ending for this production of Happy Days, but the ending of the play itself is a miraculous blend of the shattering, the beautiful and the inspirational. There’s no such thing as happiness as a destination – only moments, here and gone.

And can I add, one great moment of happiness in this production came from the intermission music mix. While the audience milled about the Bruns, an instrumental version of the theme song from the TV show “Happy Days” played, and I could think of nothing more appropriate.

Cal Shakes’ Happy Days continues through Sept. 6 at the Bruns Amphitheater in Orinda. Call 510 548-9666 or visit www.calshakes.org for information.