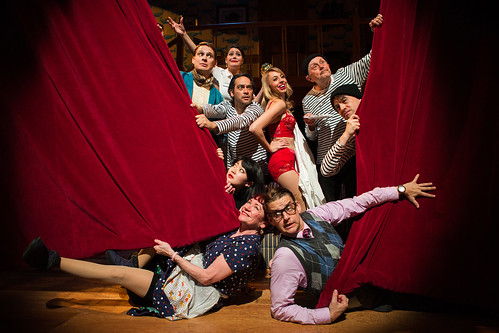 
Every actor in San Francisco Playhouse’s Noises Off, the celebrated and oft-performed Michael Frayn ode to theater and theater people disguised as a knock-down, drag-out farce, has a wonderful moment or two. Perhaps a bit of inspired comic business, a sweet connection with another actor or a clever way of twisting a laugh from dialogue.

But as appealing as the cast can be, the whole of this farce never comes together in a satisfying way. Director Susi Damilano’s production is frantic and labored and lacking in the finely tuned details that make this comic machine hum like it should. The actors work hard, the set works hard and the audience works hard to muster up some enjoyment as the three-act play (Acts 2 and 3 are now bridged by a speech from the stage management) becomes an exercise in diminishing comic returns.

That’s a shame because the ingredients are all here for a delectable comic feast that turns out to be more of an intermittent snack fortified by occasional chuckles. After a clunky Act 1, which finds a sad-sack company of actors in a final dress rehearsal of the farce Nothing On, Act 2 literally flips the scene. Set designer George Maxwell’s country home theater set spins around so we can watch Act 1 of the play-within-the-play again, but this time from backstage, where the mayhem is far more intense than it is on stage. The actors have been on tour for a bit, and all the interpersonal relationships are exploding with varying degrees of jealousy, rage, alcoholism, nose bleeds and over-protectiveness. It’s this well-orchestrated physical shtick that allows the director and her company to shine, if only briefly, as axes are wielded, whiskey bottles are tossed, flowers are catapulted, sardines are slimed and just about everyone is attempting to settle a score with someone else. 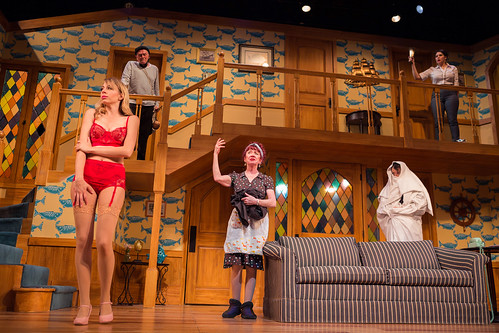 For the last section of the 2 1/2-hour play, we’re back on stage with the bedraggled company at the end of their disastrous tour, and their bitterness, exhaustion and ineptitude has completely overwhelmed them (and their audience, I might add). We should be tired from laughing at this point, but really, we’re just tired.

Noises Off had a much better run in 1988 at Marin Theatre Company in a production directed by Richard Seyd. It was such a hit that it transferred to San Francisco’s Marines Memorial Theatre, where it ran for almost a year. That production (which Seyd revived at San Jose Repertory Theatre in 2003) provided stronger evidence that Noises Off, as many have said, is one of the great farces. but when it’s not firing on all cylinders, it can also be one of the most annoying (see the wretched 1992 movie version that not even Carol Burnett can save, or better yet, don’t).

Though the SF Playhouse actors do good work independently, the company never feels like a cohesive whole, which would raise the stakes on the fracturing of their intimate little tour troupe and make the comedy zing with more focus. Still, it’s hard to resist the charms of actors like Craig Marker, whose Freddy continually claims how stupid he is about everything, and Nanci Zoppi, whose character, Belinda, is basically a straight-man role, but she imbues it with such zest she seems more like the glue holding the company together. Monique Hafen as Brooke must spend the bulk of the show in her underwear, and while Hafen has no problem carrying that off, she’s also consistent in her character’s terrible acting and unwavering adherence to the script, even while the theatrical world is imploding around her and her contact lenses are popping off.

Some occasionally marble-mouthed English accents interfere with the comedy, but the roaring egos, ill-advised affairs and sincere attempts to make good theater come through and convey a sense of theater folks as being so immersed in their insular stage world that they lose perspective on real life. Ironically, some of the best laughs of this experience come from the fake program-within-the-program for Nothing On,, where actors have been in shows like Scenes from the Charnelhouse (by Strindberg, naturally), Twice Two Is Sex and an all-male production of The Trojan Women, and they’ve become “famous” for catch phrases like, “Ooh, I can’t ‘ardly ‘old me lolly up!” That program also reveals some intriguing hints about what might happen in Act 2 of Nothing On, which we never get to see. Apparently involves a hospital trolley, surgical supplies and a straitjacket.

Putting on a play is hard work, and that has never seemed more apparent than it does here in a disappointing Noises Off.