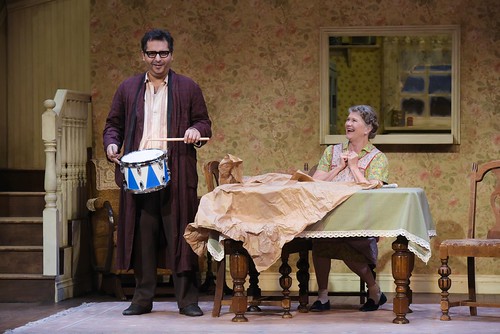 But for me, the joy, the electrical charge, the bright light of the production is Judith Ivey. She’s slightly daffy as Meg, who runs a boarding house with her laconic husband (Dan Hiatt), but she comes to life in the presence of her sole boarder (Firdous Bamji), with whom she has a flirtatious/motherly relationship. She’s also the life of a birthday party that shouldn’t be happening. And she’s not someone you want making your breakfast.

Ivey is such an absolute delight she elevates the entire production.

I reviewed The Birthday Party for TheaterMania.com. Here’s an excerpt.

The play’s sense of imminent threat gives it (sadly) a timeless feeling. Ball’s set and Candice Donnelly’s prosaic costumes feel neither current nor specifically dated. This is a world of contrasts, and Perloff’s finely tuned production makes the most of this. There’s a feeling of the past built into the walls of the boarding house (heightened by Robert Hand’s stark lighting design), and yet everything feels of the moment, a big laugh will be followed by a chill, and a goofy interplay will suddenly turn threatening and deeply serious.

Members of the large cast of Napoli! at American Conservatory Theater enjoy conversation and black market coffee as World War II rages on outside their doors. Below: Seana McKenna is Amalia and Marco Barricelli is Gennaro, her husband. Photos by Kevin Berne


Scuzza me, but you see back in old Napoli that’s…

In the play Napoli!, it’s not so much “amore” as it is “controlling the market.” American Conservatory Theater’s new translation of Eduardo De Filippo’s 1945 play eschews the Italian title, Napoli milionaria!, in favor of translators Linda Alper and Beatrice Basso’s choice, Napoli!. The exclamation point might suggest a musical (Hello, Mussolini!), but it’s probably meant more ironically. Naples during World War II, especially before the allies arrived, was a pretty dismal, bombed-out, typhus-infested place with no shortage of shortages.

Neither a chest-beating drama nor an uproarious comedy, Napoli! resides in an in-between zone, where warmth and realism count for a lot, and the more you identify with the characters, the more you get out of the production.

Director Mark Rucker does not have an easy time making the Geary feel like a realistic family home. Set designer Erik Flatmo has done what he could to reduce the playing space to something resembling a gritty Neapolitan dwelling for the Jovine family, but intimacy is sacrificed for the glory of the Geary.

As the heads of the family, Seana McKenna as Amalia and Marco Barricelli as Gennaro give big but grounded performances that generate the two-hour show’s only warmth and intermittent heat. They are surrounded by a large, genial cast that occasionally overplays its comic hand. Anthony Fusco is notable as a beleaguered citizen who turns to Amalia, a whiz at working the black market, and reveals the shifting moral ground beneath Amalia’s feet.

Napoli! has something to say about greed (especially about wartime profiteering) at the expense of community (and family), but it comes through in a way that insinuates gender is a factor. Amalia, as the wife, shouldn’t be the one making so much money from the black market coffee and pasta and cheese that she sells and withholds to drive up the price. Her out-of-work husband becomes the play’s moral conscience, but we don’t see him refusing to eat the pasta or hear him complain that his children are being fed and clothed while others in town go hungry and lose their homes. Would the play even exist if the tables were turned and Genarro was working the black market and Amalia was percolating the black market coffee?

The play ends before we see if Amalia can somehow check her avarice and put her clearly excellent business skills to use in a way that isn’t damaging to her neighbors or her family. But the play doesn’t end before she is shamed for surviving and thriving, which doesn’t quite seem fair to Amalia, who is not a villain.

While Genarro wants to revel in the horrors of the war, his wife, children and friends want to move on, almost as if it had never happened. Apparently we’re meant to think that such moving on is a bad thing, an inability to face and deal with reality. But I certainly wouldn’t want to spend a birthday party hearing about corpses in ditches and German atrocities. There’s a time and a place.

Amid occasional farce (an attempted police raid on Amalia’s black market stores generates some chuckles) and family drama (American soldiers are dogs) Napoli! ties up its family crises quite tidily but leaves its judgements hanging uneasily in the air.