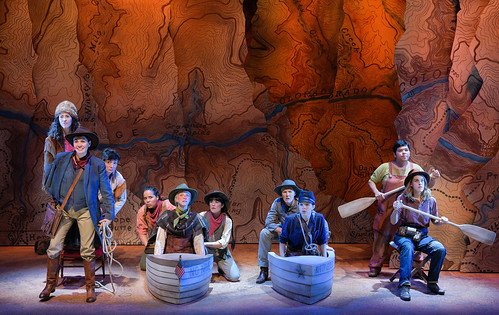 A brawny and eclectic band of explorers navigates a series of dangerous rapids on the Green and Colorado Rivers in Jaclyn Backhaus’ Men on Boats at ACT’s Strand Theater through Dec. 16. Below: Bradley (Katherine Romans) and Old Shady (Annemaria Rajala) aboard Kitty Clyde’s Sister navigate through the canyons of the Green and Colorado rivers. Photos by Kevin Berne

The first thrill of our adventure is the sheer delight of seeing 10 women on stage – 10! – in the American Conservatory Theater production of Men on Boats by Jaclyn Backhaus now at The Strand Theater. How often do we get to see that many marvelous women on a stage together? Hardly ever. What makes this assemblage even more enjoyable is that, like Hamilton and the way it re-cast our founding fathers as people of color, Backhaus tells the true story of late 19th century explorers in Colorado and Arizona – all of them men, naturally – played by a cast of women.

The exuberance and sincerity with which these actors tackle these roles quickly eliminates any thought that this gender switch might be gimmicky. Under the astute direction of Tamilla Woodard, the actors aren’t pretending to be men. They’re inhabiting characters who grow more interesting with each scene in the play’s swift 90 minutes, but they’re also getting to play in the big adventuring playground that has for so long been exclusively the domain of white men.

In the telling of John Wesley Powell’s 1869 expedition down the Green and Colorado rivers and through the Grand Canyon (then known as the Big Canyon), Backhaus requires no men, no water and no actual boats. We get parts of boats, with office chairs and stools also serving as Whitehall boats while the crew braves these wild rivers. It’s all about imagination here, with Nina Ball’s set, comprising moving backdrops made of giant topographic maps, beautifully evoking the canyons and rocks of the Southwest.

This is a robust, highly enjoyable tale of adventure, the kind we’re used to seeing in old movies and reading in books that were targeted to a male audience. Having it brought to life by women somehow gives it new life and excitement. We’re able to read the relationships better and see the human beyond the character traits. This isn’t a deep dive into the psyches of our explorers – none of whom had experience rafting rivers – but we see and hear enough to know that they’ve lived lives before this expedition, and they harbor scars and triumphs and the complexities of humans surviving in a rough world.

Liz Sklar is Powell, the over-inflated leader of this government-sanctioned trek. He often speaks like he’s running for office, but he’s also endearingly sincere and surprisingly sturdy as a leader. Toward the end of the trip, when things are looking pretty grim for the dwindling crew, Sklar taps into some powerful emotion that ensures, despite all the laughs, that attention is paid to the trip’s expanding emotional weight. 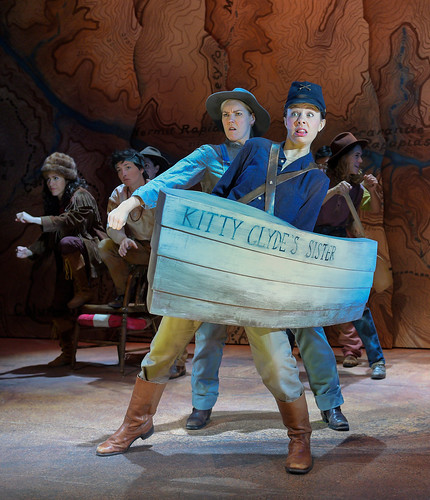 Powell’s brother, who goes by the name Old Shady (Annemaria Rajala), is an unsettling guy, whose propensity for bursting into song yield creepy songs that probably have something to do with his service in the Civil War. Another veteran on the trip, 19-year-old Bradley (a priceless Katherine Romans), had quite a different war experience with no actual combat. That could explain his indomitable good cheer.

Much less cheerful are the Howland brothers, Seneca (Lisa Hori-Garcia) and O.G. (Lauren Spencer), who might be filching from the supplies, while easily sunburned Brit Frank Goodman (Arwen Anderson) isn’t so much a hardy explorer as he is a rich tourist out for some thrills (until the thrills get too thrilling, that is).

In a play that uses contemporary language to elicit lots of laughs, no one has better comic timing than Libby King as John Colton Sumner, a likable pain in the ass who has a distinct loathing of snakes. The resident hunter/trapper (Sarita Ocón as William Dunn), cook (Amy Lizardo as Hawkins) and map maker (Rosie Hallett as Hall) all start out with crisply defined roles in the crew but emerge as some of the most interesting people in the bunch – and that’s one of the things that makes Backhaus’ play so good. You not only come to like just about everybody in these boats, but also feel a sense of kinship and understanding. What begins as a rip-roaring good adventure with expertly staged dangers – dangling off a cliff! waterfalls! capsized boat! rattlesnakes! man overboard! – becomes something more as the men bond, fracture, re-bond and face the very real possibility of not surviving to the end.

Just as women were never part of these adventure narratives, neither were Native Americans rarely seen as anything more than invisible, incidental or just plain villainous. But here, Backhaus gives a native couple (superbly played by Hori-Garcia and Spencer) one of the play’s juiciest scenes as they offer hospitality and supplies to our bumbling, oblivious explorers while serving them vast, continental-sized shade. Re-writing history is the work of actual villains, but re-casting history, as it turns out, can be whole lot of fun. 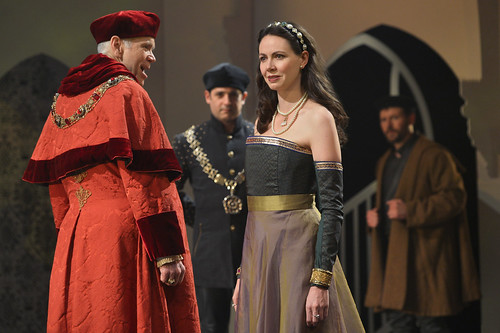 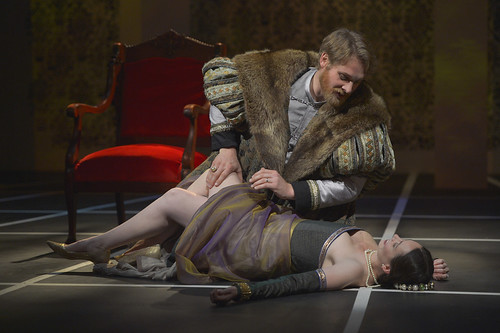