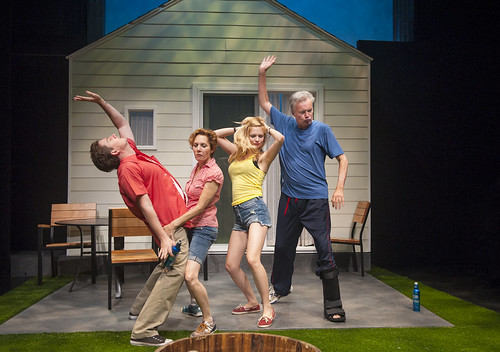 
There’s a particular kind of fear that grips those who have all the things we’re “supposed” to have – jobs, houses, marriages, ideals. The fear, of course, is not in the having of it all but in the potential loss of it all (or even in part). That brutal terrain shaped by anxiety is the real setting of Lisa D’Amour’s Detroit, now receiving its Bay Area premiere from Berkeley’s Aurora Theatre Company.

There’s no indication that this four-person comedy/drama is actually set in the Motor City, but that’s as good a place as any to dive into the state of the American dream as defined by an economy that has all but destroyed a major American city. D’Amour’s story could unfold anywhere, in any suburban enclave that was built to house the hopes and dreams of families making better lives for themselves but is now crumbling and full of people isolating themselves from one another.

There are laughs to be sure in this 100-minute show, beautifully directed by Josh Costello and performed by an engrossing cast of actors, but the laughs come from a dark place shaped by our most primal fears of being abandoned by all that defines us and imbues our lives with meaning. It’s not easy to tread the line between laughs/entertainment and profound existential dread, but D’Amour does it, and Costello and his cast are right there with her. 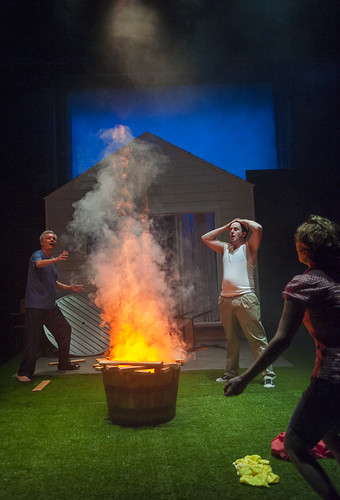 At a certain point in life, usually when you’re settled and entrenched in a career and a marriage, it gets harder to make new friends. That’s what’s initially so intriguing about “Detroit,” which has an older married couple, Mary (Amy Resnick) and Ben (Jeff Garrett) hosting a welcome barbecue for a younger couple that has just moved in next door. Sharon (Luisa Frasconi) and Kenny (Patrick Kelly Jones) arrive with plenty of baggage, but, curiously, with no furniture, very few clothes and a certain aua of mystery about them. Still, Ben and Mary are hungry for new relationships. Ben is especially adrift, having been laid off from his loan officer job, but he’s hopeful about starting his own online consulting business and is teaching himself how to build a website.

Mary longs for a civilized life (she serves caviar at a barbecue) and a friend to whom she can unburden herself. She hopes that Sharon will be that person. A midnight meltdown in the backyard tests that burgeoning friendship and reveals that Mary may have something of a drinking problem.

Amid musings on why neighbors don’t interact anymore and how there’s no longer any such thing as real communication, the two couples bond – somewhat awkwardly to be sure, but they’re definitely getting to know each other and all the good and (some of) the bad that entails.

There’s a real sense of momentum leading up to a barbecue that, with its hip-hop dancing and sexual surprises, turns rather primal rather quickly. To say the couples’ friendship sparks some flames would be an understatement. This extraordinary scene – so powerfully played by the superb cast – is funny and deep…and a little scary (it’s also nicely staged with the help of set designer Mikiko Uesugi and lighting designer Kurt Landisman).

The play really ends there, but D’Amour tacks on an unnecessary coda that requires one of the actors to play a new character. The scene provides some additional information that’s interesting, but it doesn’t really work as an ending, at least not the ending a play this potent deserves.

But it’s a testament to just how rich and disturbing this work (and this production) is that even a misstep at the end can’t detract from the fact that Detroit, laughs and all, exposes just how nightmarish the great American dream can be.