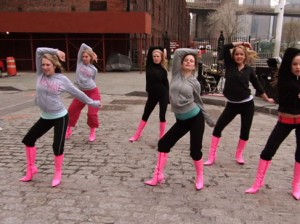 So now viewers aren’t the only ones hurling during MTV’s “Legally Blonde the Musical: The Search for Elle Woods.”

We’re down to six girls at the start of this week’s episode, and by the end of the dance audition, one of them is seen on her knees in a bathroom stall heaving up her guts. Classy.

The girl with the upset tummy was Autumn, the hero of this week’s episode. She got the best line when she admitted she’s not the world’s greatest dancer: “Dance is at the bottom of my triple-threatedness.”

She also gets the Elle Woods merit badge for cheering up the girls when, after at taxing day of dancing on the cobblestone streets of Brooklyn in pink, four-inch heel boots, they are asked to fill out a nasty questionnaire about who they think the worst singer, dancer, actor is of the group, who should have been sent home already and who do they think will win. Autumn quickly reversed the situation by totally disregarding the questions and re-writing them in a more positive, most-improved light.

Aside from Autumn, how boring was this episode? Oh, pretty darn boring. Emma whined some more about her bronchitis. Host Haylie Duff said “the next Elle Woods on Broadway” about 100 times, the girls talked about how exciting this was but how sad that was. Excited and sad. What incredible insight!

I did like Legally Blonde cast member and assistant choreographer Nick Kenkel ragging on Lauren’s face. I’ve decided that when she smiles, she’s adorable – kind of a blond Katie Holmes. But when she’s not smiling – uggh. She scares me. It’s sort of a depressive Miss Piggy.

But I’m getting mean, which indicates boredom. Back to Nick. I liked his dance direction: “Scoop through peanut butter and snap it.”

In the audition, where the girls performed the “Shake Your Junk” section of the song “Positive” (with fun, sexy, humpy choreography that is soooo Jerry Mitchell), the girls who aced it were Natalie, Bailey and Lauren. I think I’m favoring Bailey at this point, even though the show’s editors are trying to paint her as a scheming, bitchy competitor. Natalie’s cute and has great energy, but she comes across as a little girl. And Lauren, well, I think I’ve been clear on that point. 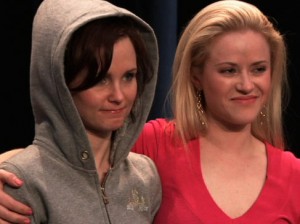 Shortly after her audition, Autumn experienced the Technicolor yawn and — surprise! — ended up in front of the judges in the casting office alongside whiny Emma. [SPOILER ALERT] The judges did the right thing and bid adieu to Emma, who did not have the right lightness for Elle. Good news is now she can start smoking again!

And here’s Bailey shaking her junk in the full performance.

No, it turns out that Katie Holmes is actually a three-dimensional acting person. How do we know this? She’s doing what most failed movie actresses do when their managers tell them it’s time for an image improvement.

As had been rumored for a while, Holmes will make her Broadway debut in a revival of Arthur Miller’s 1947 drama All My Sons.

So let me just make sure I’ve got everything straight here. Great play about a manufacturer whose greedy sloppiness may have cost American soldiers’ lives — check. Great, capable actors — Dianne Wiest, John Lithgow and Patrick Wilson, check. Presence of Tom Cruise’s wife, whose theater chops are completely untested — check. Now don’t get me wrong. Back in the day I was a huge “Dawson’s Creek” fan, watched every episode and developed some affection for the young Ms. Holmes, whose gawky charm was just right for her character, Joey Potter. But it takes a giant leap of imagination to see that kind of small-screen acting translating well to the stage. In her checkered movie career, Holmes actually registerd in Pieces of April, though my favorite of her movie roles is in Sam Raimi’s 2000 The Gift. That’s the Holmes I’d like to see on stage.

The Simon McBurney-directed All My Sons will bow later this fall. Theater tbd.

It’s probably not at all surprising that Holmes’ jump to the stage follows two things: a flop movie (Mad Money alongside Diane Keaton and Queen Latifah) and Jennifer Garner’s successful stint in Cyrano opposite Kevin Kline. All those tabloid shots of the grinning Garner and hubby Ben Affleck playing in New York parks with daughter Violet were probably more than Holmes could stand: credibility and maximum exposure.