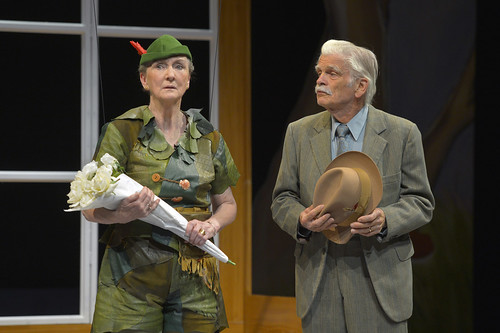 Kathleen Chalfant (left) is Ann and Ron Crawford is George in Sarah Ruhl’s For Peter Pan on Her 70th Birthday at Berkeley Repertory Theatre. Below: The cast of Peter Pan includes, from left, Charles Shaw Robinson as John, Keith Reddin as Michael, David Chandler as Jim, Chalfant as Ann and Ellen McLaughlin as Wendy. Photos courtesy of Kevin Berne/Berkeley Repertory Theatre


Sarah Ruhl is a brilliant writer capable of intellectual heights and emotional depths. Her latest play, For Peter Pan on Her 70th Birthday, now at Berkeley Repertory Theatre’s Roda Theatre, displays few of those qualities.

The luminous Kathleen Chalfant is Ann, a 70-year-old woman who begins the 90-minute one-act with a monologue recalling the life-changing experience she had playing Peter Pan in the musical of the same name in a 1955 children’s theater production in her hometown, Davenport, Iowa.

With Chalfant functioning in the Stage Manager from Our Town role to create a bridge between the audience and the play, the scene then shifts to a spacious hospital room at a Catholic hospital (which seemingly employs no doctors, nurses or orderlies), where Ann and her four siblings are holding vigil over their dying father.

Side note: this is a season of recurring themes at Berkeley Rep. Peter Pan marks the third play featuring pirates (Captain Hook appears toward the play’s end) following The Pirates of Penzance and Treasure Island. It’s also the second play, following the sublime Aubergine to deal with an adult child watching a parent’s final hours. 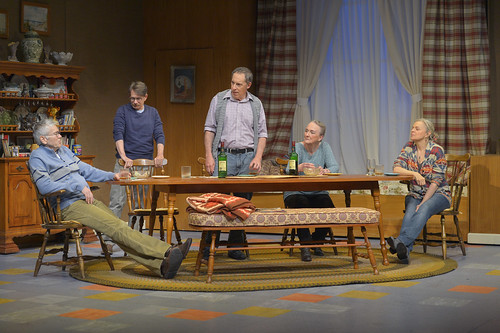 From the hospital, Annie Smart’s set shifts to the siblings – Charles Shaw Robinson, Keith Reddin, David Chandler and Ellen McLaughlin – sitting around their father’s table drinking Irish whiskey and holding a sort of wake, while the ghost of their father (Ron Crawford) (and his late dog, played by a beautiful St. Bernard named Yodel) drift through the room. When the siblings go to bed, Ann dreams of her Peter Pan triumph, and a version of that story, complete with flying, unfolds, dream-style, with elements of Ann’s life and family mixed in to create, in theory, a poignant reflection on what it means to be an adult and how it feels, with the parent generation behind you, to be the sentry between life and death.

All of that is intriguing, and Ruhl is certainly a writer who can be profound and delicate and powerful and expansive. But what she and Waters are doing with Peter Pan remains enigmatic to the point of consternation. The dialogue is clumsy and corny (I’m assuming intentionally), with the siblings talking to each other in stilted tones as if they’ve just met and have to explain themselves, their parents and their childhoods for each other’s benefit more than for the audience’s. When the whiskey-fueled chatter turns from the provocation of politics to matters of faith and spirituality, things get interesting, but only briefly before they actually make a toast to not growing up. They might as well have made a wish on the second star to the right.

The action shifts to Neverland (with the set being clunkily moved by stagehands, again, assuming that’s intentional given all the whiz-bang technology at Berkeley Rep’s disposal), with the siblings playing Darling children John, Michael and Wendy (hmmm, also their names in the “real” world), Chalfant playing Peter and Chandler playing Hook. There’s some charm in watching actors of a certain age play with the idea of being children but children imbued with their full life experiences as senior adults. And it is certainly grand to see Chalfant zipping around the stage in green tights, crowing like an annoying but undeniably appealing rooster.

The blend of dream and play and drama and direct address is all a bit too eccentric to add up to much in the end. Ruhl is an emotional rather than sentimental writer, except here. She overuses “When the Saints Go Marching In” and rather than celebrating the impact of an amateur theater experience, she seems rather baffled by it. The whole play seems a flight of fancy that isn’t clear how high or how far it wants to go, a serious rumination on human existence that’s hard to take seriously. There’s plenty of actual pixie dust tossed around the stage but no actual theatrical magic.