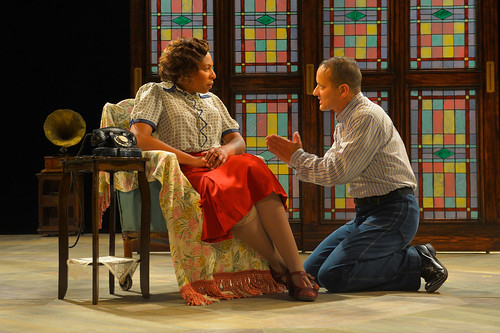 Karen Aldridge is Amanda and Sean San José is Tom in California Shakespeare Theater’s production of The Glass Menagerie by Tennessee Williams, directed by Lisa Portes. Below: Rafael Jordan is Jim, the gentleman caller, and Phoebe Fico is Laura. Photos by Kevin Berne.


Except for a large proscenium frame, the stage of California Shakespeare Theater’s Bruns Amphitheater is mostly bare. There’s no back wall to the stage, so the light from the setting sun on the Orinda hills is spectacular. It will be dark soon – in more ways than one.

On such a gorgeous Saturday night, complete with a warm breeze and, eventually, a full moon, Cal Shakes opened The Glass Menagerie, marking the Bruns debut of Tennessee Williams.

Director Lisa Portes approaches this well-worn, ever-brilliant memory play with a blank slate, or stage as the case may be. Set designer Annie Smart provides the clean, open space, and stacks all the furniture that will eventually fill the stage off to the sides. It’s up to Sean San José as Tom, our narrator, to fill that stage with an evocation of his family and their life in a claustrophobic St. Louis apartment in the early 1940s.

The role of Tom is a central one and challenging under any circumstances, but San José works doubly hard moving furniture from the wings onto the stage, timed so that as his mother, Amanda (Karen Aldridge or sister, Laura (Phoebe Fico) prepares to sit, a chair suddenly appears. This is a manic Tom, and not just because he’s running around like a stagehand, but also because he’s at his breaking point. He works a factory job he loathes and spends his nights either drinking or going to the movies until the wee hours. He wants adventure and, most importantly, he wants out from under the pressure of being the man of the Wingfield family. His father abandoned them years before, and the family barely ekes by with Tom’s salary and money Amanda gets from odd jobs. He loves his mother and sister, but the weight of their dependence is crushing him. 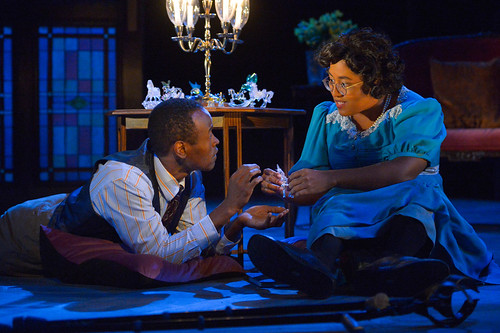 San José conveys that frustration with frenetic force, and Aldridge’s Amanda is equally as forceful. Her Southern belle charm is frayed around the edges, as her dreams of a genteel life have given way to a hardscrabble existence with a son who resists her and a daughter who couldn’t be further away from the girl she herself was growing up as a debutante.

Between the powerful personalities of her mother and brother, Laura doesn’t have much room left to discover herself. Living with a disability that requires the use of crutches to walk, Laura exists in a time and in a family where her own empowerment is of little interest. She has grown up painfully shy. She knows she cannot be the daughter her mother wants – the kind of charming beauty who attracts, as her mother did, 17 gentlemen callers in a single afternoon. She finds it painful to interact with people and instead channels herself into music played on an old Victrola or into the crystal creatures of her knickknack collections, which her mother refers to as her glass menagerie. The practical reality of Laura’s situation, from her mother’s perspective, is that she is damaged goods and unlikely to snag a husband with the kind of job/bank account to support Laura and Amanda when Tom bolts, which he will inevitably do.

Snagging a husband is the last thing Laura wants, but her self-deluded mother steamrollers over her daughter’s wishes and makes an attempt to marry her daughter off to the first guy they can get into the apartment.

That man is an old high school chum of both Laura’s and Tom’s, Jim O’Connor (Rafael Jordan), and his arrival is a do-or-die moment for the Wingfields. It also heralds the most extraordinary scene in Portes’ high-strung production. The lights go out because Tom failed to pay the bill, so when Laura and Jim have a moment to themselves, it’s by candlelight on the floor. At long last, in this intermisson-less nearly two-hour play, the angst and volume and frenzy of the production calm down, and the delicacy comes through. Fico and Jordan find a sympathetic rhythm that draws in the entire audience and makes us feel like their conversation – Laura’s first real interaction with a man – is the most important thing we could possibly be experiencing.

Their quiet, intimate duet, followed by a dance, is utterly captivating and seems as real as it is poetic. Its beauty then renders its conclusion that much more heartbreaking.

That this production is cast with actors of color and that Fico lives with a mobility disability works to underscore the sense of isolation the characters are feeling. Each of the Wingfields feels separated from the thing they most want or that elusive thing that will magically make life better and unlock happiness at last. The play being performed outside also emphasizes that sense of small, roiling lives at odds in an overwhelming world. The thing the Wingfields have is each other, but their triad is doomed to destruction from within by forces of the past, present and future.