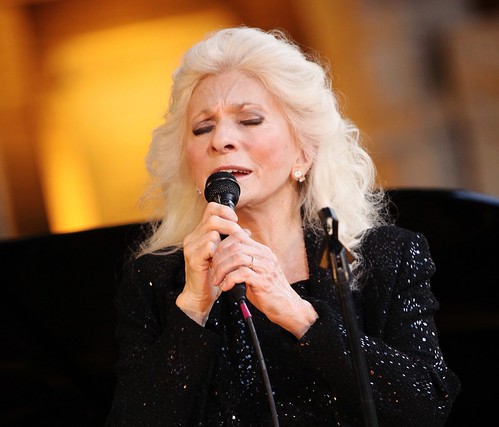 Judy Collins translates her hit with Stephen Sondheim’s “Send in the Clowns” into an evening of the composer’s works in Judy Collins Sings Sondheim, a presentation of Bay Area Cabaret at the Venetian Room in the Fairmont. Photo courtesy of Judy Collins


It’s only logical that Judy Collins would end up doing a show devoted to the songs of Stephen Sondheim. The legendary American singer is, after all, the only one to deliver Sondheim an actual hit. Her version of his “Send in the Clowns” (from A Little Night Music) is his only radio hit – it was on the Billboard charts for 11 weeks in 1975, peaking at No. 36. Then, rather amazingly, Collins’ recording charted again in 1977, peaking at No 19. The recording also nabbed a Grammy for song of the year.

Some three decades later, Collins, more gorgeous than ever at 75, is parlaying her success with “Clowns” into an entire act. Judy Collins Sings Sondheim made its debut Saturday night as part of the Bay Area Cabaret season at the Venetian Room in the Fairmont San Francisco. Accompanied on piano by Russ Walden Collins launched an ambitious show that is clearly still a work in progress.

Collins’ voice is as pure and powerful as it ever was, and when she truly connects to a song, there’s no better place to be than sitting rapt in her audience. Quite often in the show, though, Collins relied heavily on lyric sheets to make her way through the labyrinth of Sondheim’s dexterous verbosity. That reliance kept her from fully investing in the songs, although musically she was on far surer footing.

Collins is also attempting, in her patter, to interweave her autobiography with Sondheim’s life story. The results are awkward, and, for the most part, unnecessary. We don’t need to know that Sondheim was 9 when Collins was born in 1939 or that the hit song of the day was “Over the Rainbow” (although hearing Collins sing a little of that song is delightful) or that maybe Sondheim’s parents took him to see the movie. The attempt at twin narratives is really a way for Collins to sneak in some of her own hit songs.

We hear “Both Sides Now,” “My Father,” “Some Day Soon” and “Chelsea Morning,” and it’s interesting when she’s singing one of her well-worn songs, how much more effective and connected she is than when she’s tentatively stepping through the Sondheim material.

That’s not to say, however, that it’s a trial to listen to Collins sing Sondheim. On the contrary, it’s fascinating to hear what she does with the intriguing material she has selected. The trio of songs that, to my mind, have the potential of being “Send in the Clowns”-worthy interpretations are “Green Finch and Linnet Bird” from Sweeney Todd, the title song from Anyone Can Whistle and “No One Is Alone” from Into the Woods. Each song benefits from Collins’ shimmering soprano, and she finds a trenchant folk element in each.

For someone who says she didn’t know who Sondheim was before she recorded “Clowns,” Collins has clearly become an enthusiast. Her song choices stretch from the better known (“Being Alive” from Company, “I’m Still Here” from Follies, “Not a Day Goes By” from Merrily We Roll Along) to the wonderfully obscure (“Take Me to the World” and “I Remember” from Evening Primrose, “The Road You Didn’t Take” from Follies). She honors Sunday in the Park with George with a full medley that includes “Children and Art,” “Sunday,” “Finishing the Hat” and “Move On.” When she fully masters this medley, it’s going to be magnificent.

And that’s pretty much my feeling about Judy Collins Sings Sondheim – it’s a great idea for a great performer and is well on its way to being a glorious showcase for the talents of both Sondheim and Collins.

[bonus video]
Here’s Judy Collins singing “Send in the Clowns” with the Boston Pops in 1976.