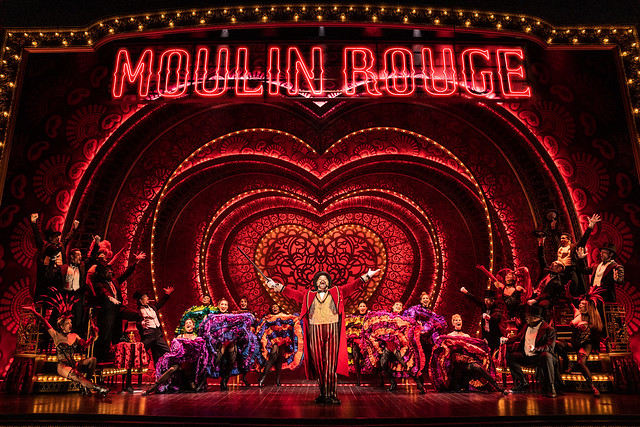 ABOVE: The cast of the North American Tour of Moulin Rouge! The Musical, now at the Orpheum Theatre as part of the BroadwaySF season. BELOW: Courtney Reed as Satine and Conor Ryan as Christian the doomed lovers. Photos by Matthew Murphy for Murphymade


Way back in the early 2000s, I liked the soundtrack of Moulin Rouge much more than I liked Baz Luhrmann’s movie, which left me kind of cold and disappointed that all those mishmashed pop songs I loved on the soundtrack were put to use in a mostly uninteresting La Bohème ripoff movie that primarily coasted on the considerable appeal of Ewan McGregor and Nicole Kidman.

That’s why I was fully prepared not to enjoy the 10-time Tony Award-winning stage adaptation, now known as Moulin Rouge! The Musical. I never saw it on Broadway (where it is still running), but I did catch the tour, which has landed at the Orpheum Theatre for the next two months as part of the BroadwaySF season.

How wrong I was. I loved Moulin Rouge! The Musical, mostly because the music I so revered in the movie has become the heart of the stage show. The idea behind this adaptation, directed by Alex Timbers, written by John Logan and (this is so important) musically supervised by Justin Levine is simple: more, more more. One stage picture is more lavish the next; there’s more melodrama and fire in the performances from the leads to the ensemble; and there are many, many more songs – 75 songs to be exact, crammed into this 2 1/2-hour show, mostly in medley form. And they run the gamut from The Rolling Stones to Dolly Parton and Edith Piaf to David Bowie.

This show revels in the joy, the corniness and the deep attachments that are embedded in pop music. To sit with an audience that audibly reacts to a song’s opening lyrics as if to say, as one, “Oh, I love this song!” Or that murmured chuckle of recognition when an unlikely character starts sliding into a Rhianna song or some newfound friends find themselves Rick-rolled in a charming medley that starts with Rodgers and Hammerstein, morphs briefly into the theme from “Dawson’s Creek” (aka “I Don’t Want to Wait by Paula Cole) and then makes way for The Police.

Moulin Rouge! The Musical loves, reveres and occasionally derides pop music. The melodrama of the plot (still a consumptive slice of La Bohème) is merely a canvas on which to create a sound collage that exalts, among many others, Adele, Lady Gaga, Labelle and, most reverently, Elton John.

As Noël Coward put it in Private Lives, “Extraordinary how potent cheap music is,” and here’s a whole, splashy, gaudy, gorgeous show to prove him right. 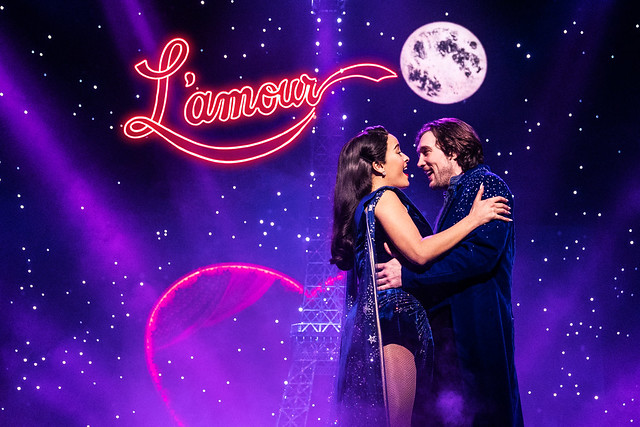 Director Timbers, with repeated jolts of energy from choreographer Sonya Tayeh and her dancers, is like his onstage bohemians. He revels in the pure poppy pleasures of music, which makes this feel less like a traditional musical and more like a party where you’re trying to piece together a story with songs you love and loathe (and songs you love to loathe, a fascinating and abundant category). The ultimate aim is to have fun and get carried away – willingly manipulated, some might say – by the nostalgic associations that carbonate so much of the music in our lives.

This is all accomplished by a marvelous cast headed by Austin Durant as Harold Zidler, the owner of and onstage host at the infamous Moulin Rouge awash in the red lights of Paris’ Montmartre district. His star, or as he keeps putting it, his sparkling diamond, is Satine, played by Courtney Reed, whose singing is superior to her acting (the preferred order of things here), and his goal is to keep his struggling club afloat. To do that, he needs Satine to charm Duke Money Bags (actually the Duke of Monroth, played by the delectably sharp David Harris). But wouldn’t you know that poor old Satine, just about to succumb to consumption (even though she can still hit those amazing power notes in her songs), falls in love. The unlikely object of her affection is the penniless American composer Christian, just arrived in Paris, who immediately falls under the spell of newfound friends Toulouse-Lautrec (André Ward) and the robust Argentine Santiago (Gabe Martìnez.

This is really Christian’s story, and Conor Ryan’s performance makes for a dazzling centerpiece. His voice makes you understand why the worldly Satine would fall for such a naïf, and his hair flips make you see how she might go weak in the knees for someone who can’t help her financially. Sinewy and sexy, this Christian has so much charm you actually feel for him when he gets his heart broken and goes on a green-hued absinthe bender.

This frenzied show doesn’t have the cheap, scaled-down feel of many touring productions. Rather, the dazzling atomic-powered Valentine sets by Derek McLane and giddy costumes by Catherine Zuber feel like rich and lush elements in a fantasy world where people express themselves almost exclusively in pop songs and athletic dance.

When all the elements come together, as in the deliriously dreamy close of Act 1 with an elephant-sized love song medley, the result is pure musical theater heaven. Or when, after the inevitably sad ending, the cast heads into a mega-mix curtain call that involves audience sing-along, confetti and even a little Offenbach.

The key to a jukebox musical’s success is tapping into what people love about the chosen music in the first place and giving it a new spin. With its fun-loving attitude, party vibe and all-around gorgeousness, Moulin Rouge! The Musical is the most sumptuous Broadway jukebox yet. John Brummer (left) is assistant Ken and David Chandler is Mark Rothko in John Logan’s drama Red at Berkeley Repertory Theatre. Below: Brummer and Chandler prepare a canvas in a show-stopping moment. Photos by www.kevinberne.com.

This is one of those new American dramas that arrives at the local regional level lauded with awards and high expectations. John Logan’s drama won a passel of Tony Awards, including Best Play, so it wouldn’t be surprising if audience members showed up with minds made up one way or the other – oh, this is going to be good because the people in New York (and London) say it is; or, oh, there’s no way this can actually be good because it has received too much praise.

It’s the kind of artistic situation about which painter Mark Rothko, the subject of Logan’s play, would have a definite, probably loud, opinion.

Writing a play about a volcanic talent like Rothko can’t help but tame him in some ways. It puts a frame around him, or at least a vision of his life, and lets us contemplate him the way we might one of his paintings. But Logan fights admirably the urge to make this monster of an artist nothing more than a pleasant evening of middle-class entertainment. He very rightly lets Rothko himself turn his life into a play of sorts.

As playwright/artist, Rothko has crafted his own character: a great man of painting, a legend in his own time (and mind), an ego-fueled maniac with an extraordinary mind and a talent for eviscerating anything in his path. He creates his own set – in this case it’s a large studio filled with what will come to be known as the Seagram Murals – and as much as he writes his story in the reds and maroons and browns and blacks on those canvases, he also engineers the drama of his rages, resentments and pontifications.

Inviting someone to look, really look, at one of his paintings, Rothko begins the play essentially telling us how to watch the play as well. “Let it pulsate,” he says (“pulsate” is a word that comes up a lot in connection with his painting). “Let the picture do its work…Lean into it…meet it halfway.” The really interesting thing about Logan’s Rothko is that he can be just awful – the very epitome of the over-inflated, pompous arr-teest – but he’s also likeable. He’s funny, and a lot of what he says is absolutely true, and if not exactly true, then extremely interesting. At least that’s how he’s played by the marvelous David Chandler in this powerful production helmed by Les Waters.

Chandler gives an outsize performance with entirely believable glimpses of the man underneath the character of “Rothko the Great.” What this Rothko needs most is an audience, although he disdains most of the human race. It’s even proposed that there’s no one on the planet Rothko really deems worthy of looking at his paintings. But attention must be paid to the great artists, so aside from the easily dismissed art world, he brings into his world a young man, a new assistant named Ken, to help with the enormous Seagram murals.

It’s with this character that Logan lays on his paint a little thick, though John Brummer’s subdued performance mellows the melodrama. We get a tragic back story and an overt reason for the young man to look to Rothko as a father figure, one he, as a young artist, will have to displace. It’s what Rothko and his contemporaries did to the surrealists and the cubists, and its’ a vision of what’s to come for Rotkho at the hands of artists like Warhol, Lichtenstein and Johns. Logan also leans heavily on the foreshadowing of Rothko’s suicide, but how do you resist a life (and death) of such drama?

Waters cannily creates a vision of painting as theater. Louisa Thompson creates a set that is at once a highly realistic painting studio and a beautifully realized piece of theater in itself. The rear panels of the stage move to expose a wall of lights that intensify Rothko’s discussion of light and why natural light is not good enough for him. Lighting designer Alexander V. Nichols uses this wall of lights effectively – I half expected a blinding flash at some point, but happily that moment never came. He also subjects us to the vulgar glare of the overhead fluorescents that Rothko wisely never uses.

Logan, like Rothko, wants this work to be significant, but also like Rothko, he’s able to puncture the pretentions of significance quite effectively. There’s a lot of humor in this work, with “work” being the operative word. One of the highlights of the 90-minute show is when the two men set about working, with no words at all (only the strains of classical music coming from Rothko’s well-used record player). The stretch an enormous canvas, hang it on the wall, set up a ladder and two buckets of blood-red paint and go to town creating a base layer for one of Rothko’s Seagram works.

In the end, Red feels as significant as it is entertaining. Logan and Waters inspire thought about pulsating art and human conflict. What really resonates is one of Rothko’s rants about his purpose as an artist and the state of our nation. “We’re a smirking nation living under the tyranny of ‘fine.’ How are you? Fine. How was your day? Fine. How are you feeling? Fine. Well, let me tell you, everything is not fine!”

He ends his screed much the way he starts the play, letting us know why we were here. “I am here to make you think,” he says. “I am not here to make pretty pictures.”