Live (well, the West Coast version of live, which is actually three hours NOT live, but hey, we’re on the West Coast) 63rd Annual Tony Awards blogging!
Please comment and join the conversation! Hit refresh for anything new. P.S. Comments will be shared (with your permission) in the main part of the post as they arrive.

Warning: there’s liable to be a lot of gushing ahead because I LOVE Dolly Parton, Neil Patrick Harris, Jane Fonda, Angela Lansbury, Next to Normal, Billy Elliot and Broadway itself. It’s party night because it’s Tony night.

To get things going, here’s a handsome photo of our host for the evening, Neil Patrick Harris, who, after watching him host “Saturday Night Live,” deserves his own variety show (btw, so does Justin Timberlake, who was also brilliant on “SNL”). NPH sings, dances, has impeccable comic timing and is just cool as hell. Can we please bring back the variety show (and not the way Rosie O’Donnell, bless her Broadway-lovin’ heart, did last fall — that was a disaster!)??? It’s showtime! Fantastic opening number with Billy Elliot and fantastic counterpoint between West Side Story’s “Tonight” and Guys & Dolls’ “Luck Be a Lady.”

Not entirely sure Stockard Channing (who looks AMAZING) should have been opposite the very young and very alive Aaron Tveit.

Shrek the Musical’s “Let Your Freak Flag Fly” was cute, but it looks like Disney gone haywire.

If only Dolly Parton were actually IN 9 to 5, I’d be there every night. Still, big love to Alison Janney, Stephanie J. Block and Megan Hilty, who actually are in the show.

Love Liza, but the vocals? Not so much.

The Hair revival definitely lets the sun shine in.

I’m so happy to see Dolly Parton on a Broadway stage. Don’t think she’ll be going home with any trophies, so let’s get her photo up here. Jane Fonda showing some major cleveage in a black gown. She presented the best performance by a featured actor in a play to Roger Robinson in Joe Turner’s Come and Gone. That’s the play the Obamas saw last weekend. The Shrek number: Trying too hard to blend Beauty and the Beast with Spamalot.

Says commenter “bracelets”: “The guy clapping after the SHREK number sums it up exactly.”

Tracy writes of the opening number: “Bret Michaels on the Tony’s? That’s a surprise. He called me when I was 21. I sent him fan mail and a poem. That crush is long over.”

James Gandolfini says he and Shrek are no relation. Fuggedaboutit. He and Jeff Daniels presented the best featured actress in a musical award to Angela Lansbury!!! This is her fifth Tony. God love her. She is the essence of gratitude and happiness and joy! Ah, a Mamma Mia moment — something for the viewers in the great Midwest.

West Side Story number: “Dance” at the Gym, “Tonight.” Could Matt Cavenaugh and Josefina Scaglione be any more adorable? And she almost didn’t hit that high note.

Could I look that good if I sleep with Tim Robbins? Kidding. All due respect to the wondrous Susan Sarandon. She gave the best director of a play award to Matthew Warchus for God of Carnage (he was also nominated for the trilogy The Norman Conquests).

Sarandon also handed the best director of a musical award to Stephen Daldry of Billy Elliot — he also directed the movie on which the musical is based. Journey on the Tonys! I never stopped believin’ (neither did Liza Minnelli, all evidence to the contrary). Rock of Ages looks like a blast. And has anyone noticed that Journey, and specifically “Don’t Stop Believin'” has become super hot? (best use of the song on TV’s “Glee”) Commenter Trixie says: “I could use a glitter gun and some ginormous angel wings.” Honey, they’re in the mail.
Commenter Mike says: “Rock of Ages looks like the Hair of the 80’s. I want to SEE that.”

Edie Falco (stunning) presents the Tony for special event to Liza Minnelli and her boys for Liza’s at the Palace. Sorry, Will Ferrell. Thank God Slava’s Snow Show didn’t win. Boy did I hate that show on tour. What can you say about Liza except maybe: baby, take a breath. A really long breath. God of Carnage clip — not a great selling point (and what’s with that cracked mud artwork in the background?). Guys and Dolls number — saved by a hand mic. The guy in charge of sound tonight ought to look for work in the wonderful world of fast food.

Commenter Dyan says: “Some of these shows look like a big, fat, hot mess.”
We’re on a hot mess trend here. Ms. Small says: “Ok…Liza is just a hot mess…I’m sorry. `a great America treasure’ ok, Ok..OK…OKAY!!!…fine…hot mess. BUT, great hold tactic! Whenever I’m being played off the stage I’m totally pulling the `Wait, not yet! I have to thank my crazy-famous parents’ card!!!”

Ghost of Broadway yet to come: John Stamos in Bye Bye Birdie. Could Bob Saget be far behind?

Gregory Jbara wins best featured actor in a musical for his role as Billy Elliot’s dad in Shrek — kidding — in Billy Elliot. He dragged his wife, Julie, up on stage with him. Really sweet speech.

And best featured actress in a musical goes to Karen Olivo as Anita in West Side Story. Her first Tony Award. Her advice: surround yourself with people who love you. Brilliant idea to have Carrie Fisher introduce Next to Normal: bipolar lady, meet bipolar musical. I know how brilliant this show is on disc — not sure it’s really coming across on the tube. OK. Alice Ripley, J. Robert Spencer and Aaron Tveit pulled it off. Electrifying.

Jessica Lange — a long way from Big Edie in HBO’s Grey Gardens — she makes reading glasses gorgeous and classy. She handed Geoffrey Rush his award for best actor in a play for his performance in Ionesco’s Exit the King. This is the Oscar winner’s first Tony. Classy Aussie. Commenter Ms. Small: “not to be vulgar during a sensitive time….the `in memoriam’ section…but you know someone thought about it being appropriate to have the vampire-hued Bebe Neuwirth introduce the dead people. right? very nicely done segment.” P.S. Ms. Neuwirth will be playing Morticia in the upcoming Addams Family musical.

Frank Langella, in whom awards season brings out the best, chided nominators for missing his brilliance in A Man for All Seasons last season. On with business: best actress in a play goes to Marcia Gay Harden for God of Carnage. I’m a little sad Jane Fonda didn’t win because I wanted to hear her speech. Whoops — in the intros they mixed up Janet McTeer and Harriet Walter. Shame, Tonys! Sir Elton introduces Billy Elliot, the show for which he wrote a wonderful score that, for the most part, doesn’t sound remotely like Elton John. Billy’s angry dance amid a riot is pretty phenomenal. Why oh why are we wasting precious prime time on Legally Blonde the Musical? Tours should get their own show — this is all about Broadway.

Harvey Fierstein, his clarion voice a thing of beauty, presents the best revival of a play award to The Norman Conquests, which is actually three plays. Delighted to see Jessica Hynes in the crowd up on stage accepting the award. She was in one of my favorite TV shows, the British series “Spaced.”
And best play goes to Yasmina Reza’s God of Carnage. Not really much of a surprise there. Why does everyone associated with this play seem so downbeat? Commenter LY has a fashion note: “As my roommate put it, Marcia Gay Harden looks like an asparagus.”

Time for the tribute to Jerry Herman, a worthy and deserving candidate. He’s a true American treasure. Lots of good footage from the terrific documentary Words and Music by Jerry Herman. Lifetime achievement indeed. Great shot of a tearful Harvey Fierstein. “It just doesn’t get any better than this, does it?” the 77-year-old Herman said to the audience in mid-standing ovation. “The thing I want you to know is I will hold this moment fast because the best of times is now, is now, is now, is definitely now.” Anne Hathaway (scrumptious) should bolt from the Central Park production of Twelfth Night and join the cast of Hair. She’d probably have more fun. The well-heeled audience probably didn’t expect to have cast members’ crotches in their faces tonight. Lucky them.

Oh, look! It’s Kristin Chenoweth and the girls! They’re all up and out to present the best revival of a musical to Hair. Yay Oskar Eustis (artistic director of the Public Theater) — “Equality now!” David Hyde Pierce comes out to present leading actress in a musical. Oh hooray! It’s Alice Ripley from Next to Normal. Wow. She is fierce. And wonderful. And incredibly talented. Audra McDonald presents leading actor in a musical to the trio of Billys from Billy Elliot. Tony history is made as three actors win a single award. Completely adorable. David Alvarez, Kiril Kulish and Trent Kowalik. And we’re coming to the finish line. Here’s Liza. Best musical goes to — no surprise here — Billy Elliot. Great to see all those kids on stage — Broadway needs young people. And that’s all, folks! A highly enjoyable evening. Neil Patrick Harris did a wonderful job (again, someone please get this man his own variety show!!!). At last they gave him a song! Apparently Angela Lansbury hooked up with Poison backstage. Great lyric about performing on your knees only working for Golden Globes.
In spite of the state of the world, Broadway looks to be in good shape — at least that’s how it seemed on TV.

A final thought from commenter Mike: “OMG. Five Frankie Vallis, Elton John, Dolly Parton and a cast of literally thousands. I have never seen an even comparable performance. Well, maybe Jersey Boys. But what a production! That was fantastic. I’m totally glad I got culture.”

Thanks to my commenters for making this evening so enjoyable for me. Now let’s all go see a Broadway show! 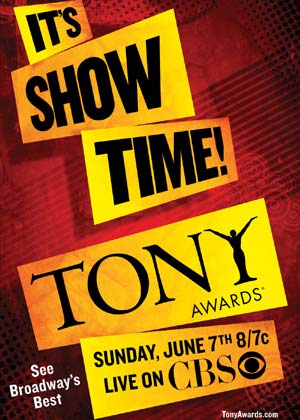 Tony nominations came out today, and there are a couple of things that make me happy.

The Tony Awards will be handed out June 7 on CBS. Visit http://www.tonyawards.com for information.

Now, here are your nominees:

Best Musical
Billy Elliot, The Musical
Next to Normal
Rock of Ages
Shrek The Musical

Allison Janney, 9 to 5: The Musical
Alice Ripley, Next to Normal
Josefina Scaglione, West Side Story

Best Performance by a Featured Actor in a Play
John Glover, Waiting for Godot

Tony Honors for Excellence in the Theatre
Shirley Herz