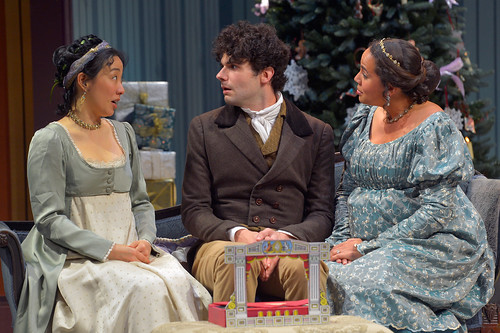 
We’re all in need of some genuine Christmas cheer this year, and that’s exactly what Marin Theatre Company’s Miss Bennet: Christmas at Pemberley provides. It’s sweet without being sappy. It’s sharp, clever and funny with a warm undercurrent of genuine emotion. What more could you want from a holiday show (except maybe passed eggnog and a round of carols)?

The show also has the distinction of slaking the seemingly bottomless appetite for all things Jane Austen. Writers Lauren Gunderson (the San Francisco playwright who holds the distinction of being the most produced living playwright this season in the U.S.) and Margot Melcon (MTC’s former director of new play development) have gone back to the Austen well to fashion a sequel of sorts to the 1813 Pride and Prejudice. They focus in on Christmas in the grand home of Elizabeth (Bennet) Darcy and Fitzwilliam Darcy, Esq., married for several years now and hosting family and friends for the holiday.

We never get to see the Bennet parents and daughter Kitty, who are on their way up from London, but we do get to spend time with oldest daughter Jane (who is nearing the birth of her first child) and husband Charles Bingley, unmarried Mary Bennet and youngest daughter Lydia, whose marriage to George Wickham remains a source of concern for the family.

So the Miss Bennet of the play’s title is Mary, a young woman who loves books and music and dreams of seeing the world even though she knows her fate as a middle daughter has landed her smack in the “old maid caring for the aging parents” slot. Gunderson and Melcon are not content to let the intellectually curious, spirited Mary fulfill her lonely duty, so they give her a big Christmas present in the form of Lord Arthur de Bourgh, who ends up at Pemberley for the holidays and quickly finds Mary to be as delightful an oddball as he. 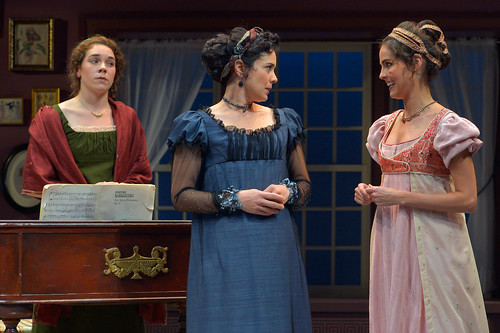 The Austen lovers will lap up the complications in the from of Anne de Bourgh, Arthur’s cousin (and a previous source of tension in P&P when her mother tried to forcefully engage her to Mr. Darcy), who is now, true to her departed mother’s memory, forcing an engagement with the most advantageous man, who happens to be Arthur.

Gunderson and Melcon clearly have great affection for all things Austen, and if there’s anything that connects the original with this new chapter, it’s the spirit of the women defying expectations of their corseted times with feisty intelligence, humor and compassion for one another. Even though Anne is sort of the bad guy, she is not simply discarded once the romantic machinations have clicked into happy ending gear. She is afforded a future and, happily, a friend.

The MTC production looks appropriately grand with the Pemberley drawing room/library outfitted by set designer Erik Flatmo and featuring what was apparently a real oddity in the early 19th century outside of Germany: a freshly cut spruce in the corner just ready for trimming with jewels and candles. For much of the play’s two hours (plus intermission), a gentle snow falls just outside the stately windows, giving the whole enterprise an even cozier feeling.

Director Meredith McDonough has some trouble establishing a firm comic tone in Act 1, but by Act 2, things are much more solid. Part of that has to do with the arrival of Laura Odeh as Anne, a comic force of nature. Most of the really big, satisfying laughs in the show are hers.

The entire cast is tremendously appealing, and how nice to see the usual women-to-men ratio overturned here: five women in the cast and three men. Martha Brigham and Adam Magill are charmingly effective as the central couple, Mary and Arthur. Both are misfits in their world, so finding one another is incredibly appealing, and we root for them from the start. Brigham epitomizes the Austen heroine – smart, well spoken and painfully self-aware. Magill is awfully tall, and he uses his height to convey Arthur’s awkwardness in the world, which can also be terribly funny.

Cindy Im and Joseph Patrick O’Malley are appropriately google-eyed newlyweds Lizzie and Darcy, and though they have their moments, they know they’ve had their time in the spotlight and now it’s Mary’s turn. Lauren Spencer and Thomas Gorrebeeck add some fizz as Jane and Bingley, and Erika Rankin makes for a petulant but somehow endearing Lydia.

Spending Christmas with these people is quite pleasant. The conversation is always lively, the intrigues are on the low end of the silly/soapy scale, and by the end there is a wealth of good feeling, both on stage and off. The programming people who make beautiful television like “Downton Abbey” or “The Crown” would do well to return to the world of Jane Austen, and they would be wise to turn to Gunderson and Melcon to ensure that it’s done right.