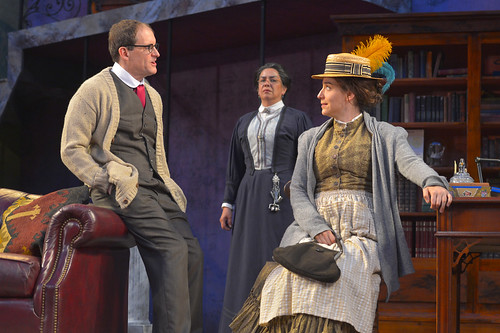 
When real life comes in and smacks Prof. Henry Higgins across the face, it’s a wonderful thing to see this brilliant yet stunted man consider, perhaps for the first time in his life, that kindness may have worth akin to genius.

The force representing the real world – a world of messiness and emotion and connection – takes the form of Eliza Doolittle, an extraordinary young woman who is the intellectual if not social equal of Higgins and his superior when it comes to living life as most of humanity experiences it.

One of the great things about the California Shakespeare Theater production of George Bernard Shaw’s Pygmalion is how balanced it is. You feel Shaw’s guiding hand in Jonathan Moscone’s approach in the way that nothing feels superfluous. Every character is there for a reason and a point of view. Moscone’s cast is filled with Bay Area all-stars plus a remarkable company debut from Irene Lucio as Eliza, the flower girl with brains, bravery and aspiration.

Lucio’s Eliza is fascinating for several reasons, not the least of which is how she is fully emotionally alive without ever over-playing it. The rough Eliza we meet on the cobblestones of Covent Garden is recognizable in the graceful, articulate, beautifully spoken Eliza we see at the end. There’s an emotional through-line in the character I haven’t felt before in other productions of the play or its musical sibling, My Fair Lady. That makes a big difference in the focus of the story, which comes down to Henry, the teacher (or sculptor), and Eliza, the student (or sculpture) and then zeroes even closer in on Eliza before allowing Henry a moment of reflection, realization and possible heartbreak (which is, in its own right, a triumph brought about by Eliza). 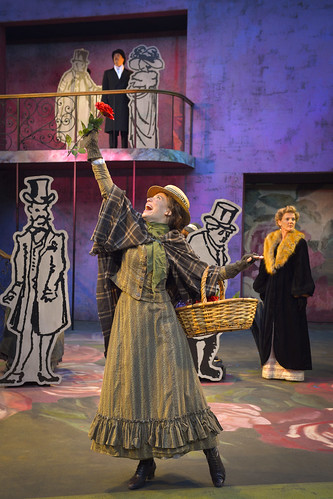 The pleasures of this 2 1/2-hour play are many, from the elegant, florally accented set by Annie Smart to the classy costumes by Anna Oliver. But it’s the sterling cast that really makes it crackle. As the “pretty pair of babies playing with their live doll,” Anthony Fusco and L. Peter Callender essaying Higgins and Col. Pickering respectively, are delightfully crisp in their camaraderie and confirmed bachelorhood. They embark on their experiment turning Eliza, a “draggle-tailed guttersnipe,” into a princess at a ball with the glee of boys building a fort in the woods. That Pickering is the warmer, more mannerly man is clear from the start, and Higgins, for all his selfish thoughtlessness, is always interesting and usually honest. He’s frank and even mean, but it doesn’t seem he intends to be. Callender’s charms are many here, and the masterful Fusco keeps Higgins from being a monster by virtue of his intelligence, enthusiasm and emotional complexity under all that scholarly folderol.

Catherine Castellanos is the epitome of British resolve as housekeeper Mrs. Pearce. She’s strong and sensible and can’t for the life of her talk Higgins and Pickering into understanding that their “experiment” involves a real, live human being with feelings and attachments and a future growing more complicated by the day. Equally strong but with more humor and heart is Sharon Lockwood’s Mrs. Higgins, a mother continually frustrated by her rude, inconsiderate yet somehow adorable son. Lockwood and Castellanos are also very funny in the opening scene as squawking Cockneys.

The Eynsford Hill family is often forgettable in Pygmalion, but not here. As members of the upper class who have very little money, their desperation masked with pretension is a powerful component of Shaw’s deconstruction of class and its illusions and debilitating demands. Julie Eccles as Mrs. Eynsford Hill keeps up appearances but clearly has suffered in life. She has compassion, unlike her daughter Clara (Elyse Price), while her son Freddy (Nicholas Pleczar) is simply a noodle.

Probably as Shaw intended it, Eliza’s father, Alfred Doolittle, practically steals the show. James Carpenter’s performance bursts with charm and unfettered joy at being a proud member of the “undeserving poor.” Before he officially launches his crusade against middle-class morality, Alfred the dustman is a rouge and a ruffian touched with a gift for rhetoric. He brings discomfort and entertainment in equal measure, and there’s menace and merriment in Carpenter’s brilliant portrayal. It’s too bad Shaw never got around to writing a spin-off: Doolittle in America.

So often Pygmalion is presented as a play of ideas, which it certainly is. Shaw is never caught short on that score. But it’s also a play bursting with life. Eliza wants more and better for herself and does everything she can to get it, even if what she gets isn’t at all what she expected. But she’s undaunted, and she finds that she’s as smart as Higgins but even better equipped than he is to deal with the realities of modern life. She heads off into an uncertain future with confidence, and that’s absolutely thrilling.

[bonus interview]
I talked to Pygmalion dialect coach Lynne Soffer for a feature in the San Francisco Chronicle. Read the story here.