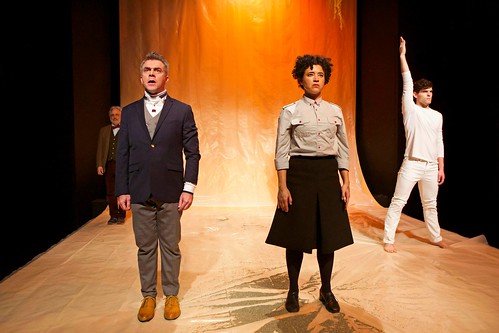 
It’s a museum piece come to life, a poem that dances, a classic that feels ultra-modern. Shotgun Players’ Antigonick is all that and more, including somewhat baffling and exhausting.

You don’t go into a Mark Jackson show expecting theatrical pablum. Jackson has long been one of the Bay Area’s most interesting theater makers – intelligent, audacious, boundary pushing and always, always interesting. He tends to merge varying styles of theater, often very physical, but always in service of storytelling and emotion. His shows, especially the ones he writes and directs, can’t be described as easy, but there’s always depth, invention and sharp stagecraft.

All of that is true with Antigonick, an adaptation of Sophocles by Anne Carson that name checks Hegel and Beckett within its first moments. Jackson co-directs the piece with Hope Mohr, founder and director of Hope Mohr Dance, and it is very much a piece of dance theater. The 75-minute show hardly ever stops moving, and Carson writes in a silent, all-in-white character representing – what? – time, space, now. His name is Nick (Parker Murphy), as in “nick of time” perhaps, and though he’s visible to us, he seems an invisible guiding force helping shape the movement on the Ashby Stage.

For an unconventional staging of Antigone, this version keeps the basic outline of Sophocles’ story. Antigone (Rami Margron) has lost two brothers in war. One is offered the full honor of burial while the other, having been deemed a traitor by new King Kreon (Kevin Clarke), will remain unburied. Antigone finds his unacceptable and will break the law to see that her brother receives his just burial rites. 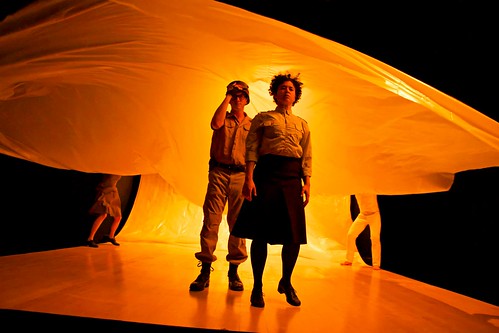 Within that story lies chaos. The play begins with shouting and repetition as Antigone and her sister, Ismene (Monique Jenkinson, who also plays Eurydike later in the play), and by the time the Chorus (David Sinaiko) looking like an immigrant from Middle Earth, it’s clear that this is going to be a wild night in post-modern Ancient Greece.

There’s a distinctly intellectual feel to Antigonick, though in a way that suggests a classics professor was trying to impress a dance professor and vice versa, so they haul out all their flashiest work in service to a translation of Sophocles that feels a little like an iPod on shuffle.

There’s a sense of humor at work here (thanks largely to Sinaiko), and I wish there were more, but much of this short but intense show is consumed by deadly seriousness. This is rigorous, grueling theater (and not just for the actors). There’s flash in the design, which comprises Nina Ball’s great stretch of wood planking, which curves gently from wall to floor. There’s a horse carcass hovering over the stage like a twisted chandelier, and at a certain point, a great sheet of plastic enters the fray like a howling storm. Stephanie Buchner’s lights add drama and shadow, and Theodore J.H. Hulsker’s sound design – a seemingly nonstop wash of electronic and symphonic sounds mixed with sound effects like ticking clocks – is as active and present as the choreography.

The cast, which also includes the amusing Kenny Toll as various characters including Antigone’s betrothed and various guards and messengers, does some astonishing work here. Jackson and Mohr demand a great deal of them, and they deliver bold, kinetic performances that electrify the fragmented storytelling. Clarke, as a conflicted Kreon, is especially compelling, and his final scene is one that lingers in memory.

As grand art, Antigonick succeeds mightily. It feels bold, fresh, challenging and incisively crafted. But what the show lacked, for me, was a human level. Intellectually I get the conflict between obeying the law versus doing the right thing, being patriotic and remaining true to yourself. But it never fully registered on a personal level. The art dazzled but the heart, my heart at any rate, remained untouched.

FOR MORE INFORMATION
Anne Carson’s Antigonick continues an extended run through May 3 in a Shotgun Players production at the Ashby Stage, 1901 Ashby Ave., Berkeley. Tickets are $20-$35. Call 510-841-6500 or visit www.shotgunplayers.org.