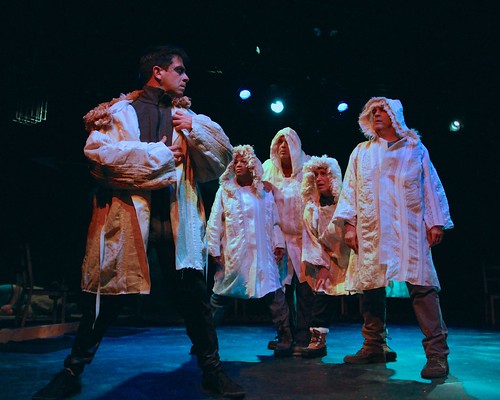 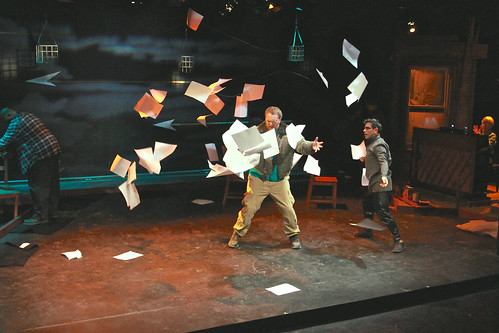 A strange disappearance: Parents of a missing child (Gabriel Marin and Arwen Anderson on couch) meet with police detectives (Danny Wolohan and Patrick Jones, far left and far right) under the watchful eye of a nosy neighbor (Rachel Harker) in Steve Yockey’s Bellwether at Marin Theatre Company. Below: Anderson meets Kathryn Zdan in the suburban underworld. Photos by www.DavidAllenStudio.com

What starts out as a satiric look at suburban living – Bellwether is a nice neighborhood, we’re told over and over again, a gated community commuter distance from an unnamed big city – quickly becomes a potent family drama. A husband and wife (Gabriel Marin and Arwen Anderson) have hit some rocky ground as they and their about-to-turn-7-year-old daughter try adjusting to suburban living.

The show becomes a crime thriller when little Amy disappears from her bed while her mom was downstairs with a neighbor and a bottle of wine. And then it turns into something Stephen King might dream up in a novel or short story. Yockey delves into the underworld of suburbia, a dark, dangerous place that balances the shiny, happy existence up top.

That Yockey – MTC’s playwright in residence for the 2009-10 season – anchors the fantastical aspects of the story with his exploration of family life in the suburbs does him credit. He and director Ryan Rilette manage something very tricky here with a tone that shifts from satirical comedy to high drama to horror.

Much of the success of these tonal shifts come from the utterly believable performances at the center of the story. Marin’s intensity and near hysteria powerfully convey the desperation of a father whose child has slipped away from him, and Anderson, though not as intense, displays guilt and determination in equal measure. Rachel Harker as a needy, nosy neighbor is extraordinary. She’s like a sitcom character at first but goes through several iterations, all of which she fills with depth and frightening accuracy.

At less than two hours, Bellwether grabs your attention immediately and only tightens its grip as it zips along. I would say that Yockey spends too much time in the underworld – where there is fine work by Jessica Lynn Carroll and Kathryn Zdan. We get a sketchy explanation about how this world works, but it could be swifter and more enigmatic. We don’t want too much time to linger and think about this situation because implausibilities start popping up alongside questions that don’t get answered.

Back on the strangely quiet streets of Bellwether, Yockey and Rilette whip up an increasingly wild mob of neighbors (including Danny Wolohan, Liz Sklar, Marissa Keltie, Mollie Stickney and Patrick Jones) and a trio of inane (naturally) and vampiric TV news reporters.

Bellwether packs quite a punch, from the striking performances to the sumptuous two-level suburban home set by Giulio Cesare Perrone and sinister lighting by York Kennedy.

When the play ends, and it’s hard to know what to think exactly because your head is spinning. Was it funny? Scary? Moving? Yes. Bellwether is, in short, fantastic. In every sense of the word.

FOR MORE INFORMATION
Steve Yockey’s Bellwether continues through Oct. 30 at Marin Theatre Company, 397 Miller Ave., Mill Valley. Tickets are $34-$55 ($15 rush tickets available one hour prior to show, based on availability; under 30: $20, all performances). Call 415-388-5208 or visit www.marintheatre.org.