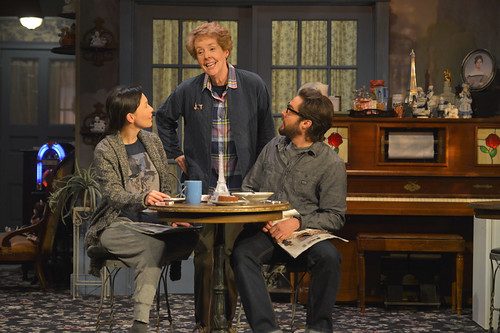 
There are two Johns in Annie Baker’s John, neither of whom we actually meet. One wreaked mental havoc on another person and the other is wreaking havoc on a relationship. Both feel like sinister external forces, but they are just two of many in this wonderfully bizarre, engrossingly enigmatic play by one of our country’s most original and captivating voices.

Locally, we’ve seen Baker’s Body Awareness at the Aurora (read my review here), Aliens at San Francisco Playhouse (review) and Circle Mirror Transformation at Marin Theatre Company (review) – and that was all in 2012. Since then, she has won the Pulitzer Prize (for The Flick) and has continued to solidify her reputation as one of those shape-shifting playwrights whose work you don’t want to miss.

John arrives in the Bay Area courtesy of American Conservatory Theater, whose Strand Theater provides a much cozier home for the play in which coziness is an important factor. Set in a Gettysburg, Pennsylvania bed and breakfast, the play traffics in the kind of creepy, overstuffed homeyness that so many B&Bs do so well. Set designer Marsha Ginsberg and lighting designer Robert Hand have created an astonishingly realistic multi-level set that is so rich in detail, so crammed with information that that it’s not like a fifth character in the show, it is the fifth character in the show. 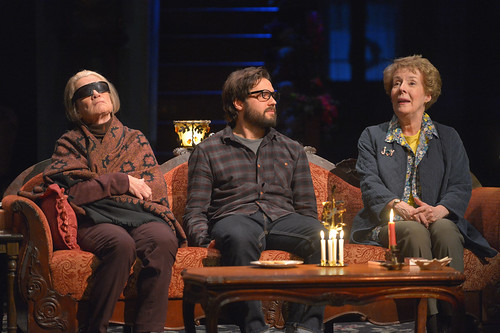 There’s an element of hyper-realism in Baker’s plays. The worlds her characters inhabit tend to be precise reflections of the world we live in, and the way her characters talk – every stammer, every “like” and especially every pause – also bring a sense of heightened realism as well as extended running times (John runs three hours and includes two intermissions, but I wasn’t bored for a second). All of that is true here, but Baker is playing with convention as well. For instance, she has star Georgia Engel, who plays Mertis, the innkeeper, push open the curtains at the start of an act and close them at the end. She also has a character make a surprise appearance (bizarre and unmissable) during one of the intermissions, so think twice about the bathroom run. These are reminders à la Brecht and Beckett that we’re watching a play and that this seeming reality is being messed with.

That notion of being messed with, of being the subject of mind games, looms large in John, which seems in so many ways to be a domestic drama about young love, old age and navigating crisis. But in other ways, the play is like an Edward Albee riddle, a conundrum asking big questions about the existence of god, the after-life and demons. Mertis, who would like people to call her Kitty but they hardly ever do, is the master of this universe to the extent that she even controls time (literally), so is she a god? Or is she the sweet-seeming older lady who occasionally talks like a beloved TV character (perhaps Georgette from “The Mary Tyler Moore Show”)? Or perhaps, with her interest in H.P. Lovecraft and Cthulhu, she is something much darker.

There are no answers here. Just mysteries, and though we may crave big actions, big reveals, big scares, John, directed with precision and care by Ken Rus Schmoll is content to create a mood of sustained creepiness where shadows – real and metaphorical – loom large.

Engel, reprising her role from the New York production, is a dream. She plays in to stereotype and against it, her kindness and sweet daffiness contrasting with a hard life with hints of mental illness, marital discord and distinctly darker currents. Mertis’ guests for the duration of the play are a young Brooklyn couple, Jenny (Stacey Yen) and Elias (Joe Paulik). She writes questions for a game show and he’s a drummer with a penchant for Civil War history. They’re on a road trip, and their relationship has hit some significant bumps. Their sense of hipster irony digs the dolls, stuffed animals and general froufrou of the B&B (which is also decorated to the hilt for Christmas – so many layers!), but each in his or her way falls into the comfort – pretend or otherwise – of the space and of Mertis’ offbeat hospitality.

Ann McDonough adds more laughs to what is already a surprisingly funny play as Mertis’ friend, Genevieve. Blind and with a penchant for storytelling and Vienna Finger cookies, Genevieve is also another oddball feature of the play, a character that defies clear definition but adds sharp points to the general fog of mystery that hangs over the play.

John is not a play for everyone. Its rhythms are its own and nothing like our collective short attention span, but its rewards are great: a smart, original, confounding, entertaining, soulful, baffling work that makes you glad you checked in.