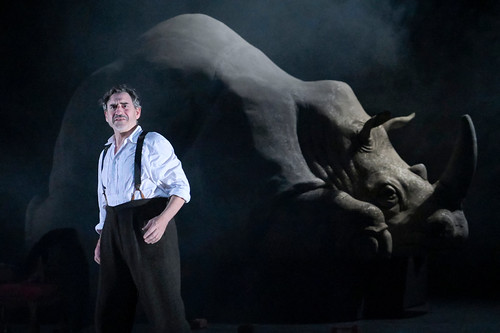 Berenger (David Breitbarth) watches in horror as citizens of his village turn into rhinoceroses in Eugène Ionesco’s Rhinoceros at American Conservatory Theater’s Geary Theater. Below: Citizens attempt to remain civilized in the face of craziness as people transform into beasts all around them. The cast includes (from left) Jomar Tagatac as Mr. Botard, Danny Scheie as Mr. Papillon, Trish Mulholland as Mrs. Boeuf (rear, on the back of a giant rhino), David Breitbarth as Berenger, Rona Figueroa as Daisy and Teddy Spencer as Mr. Dudard. Photos by Kevin Berne


There are multiple points in human history when Eugène Ionesco’s Rhinoceros would make for funny/terrifying entertainment. Unfortunately, this is one of them.

In Ionesco’s 1959 play, a small French village is best by giant horned pachyderms. Or, more accurately, the citizens are, one by one, turning into beasts. It’s up to one man to resist the herd mentality, hang on to his sanity and resist whatever sort of magic is transforming small-town people into rampaging creatures.

There is never a moment in director Frank Galati’s robust production now at the Geary Theater courtesy of American Conservatory Theater that the audience doesn’t feel the weight of everything happening outside the theater walls, from coast to coast in this small French village we call America. The rhinos in the play (and we see a few of them in Robert Perdziola’s stage design and they’re awesome in every sense of the word) aren’t wearing red baseball caps, but they might as well be.

You might say, hey, wait. Ionesco was responding to Nazis and other really bad people from the 20th century, to which I would say, hey, we have Nazis of our own and hordes of bad people who seem hellbent on lying, cheating, destroying and stupefying. So it’s the perfect climate for Rhinoceros, which goes from silly to scary in only 90 minutes (including intermission).

Galati’s production has a finely tuned sense of what’s important here, and that changes as the play progresses. The first scene, for instance, takes place in front of a small backdrop painted with a village scene. Two friends are having a drink and arguing in front of a cafe when the first rhino is spotted in town. That causes a stir, but not quite the stir you might imagine if something like this were actually to happen. It’s more of a curiosity that townsfolk can regard as not really involving or affecting them. The tone is light, the pace brisk. Actors Matt DeCaro (a comic powerhouse) as Gene and David Breitbarth as Berenger, our unlikely hero, are arguing over propriety. Gene is all about it. Berenger is bored, disheveled and wants a drink. But then the rhino thing starts to get out of hand. Berenger’s workplace – the local newspaper – is damaged by a stampeding beast, but that’s not enough to convince Mr. Botard (the excellent Jomar Tagatac) that the rhinos exist or that there’s not something else happening here. He dubs all of this “fake news.” I’m hoping that translator Derek Prouse didn’t have to massage that quote at all and that Ionesco himself would have chosen those exact words if he were translating it today. 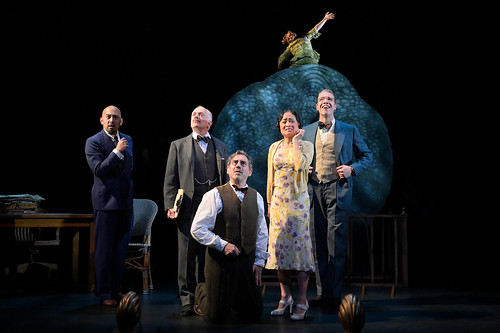 More citizens are turning into rhinos, including Berenger’s best pal Gene, who does not slip easily into the weathered hide of the beast, but oh boy does that give DeCaro a lot to play with (at one point he even does the Macarena and the Floss to hilarious effect).

What was funny and absurd begins to carry more weight with each succeeding scene. The painted backdrops give way to a dark stage in which a giant rhinoceros looms (the lighting is by Chris Lundhal), and the tension mounts. Characters continue to debate philosophy and the true intention of the rhinos (or the people who want to join the rhinos) as if there was actually something to debate (people are turning into rhinos for goodness’ sake!). Whatever the reasons for this occurrence, it has actually occurred, and the majority has quite willingly accepted – some even enthusiastically – this new life of knocking about on four legs with a horn (or two, depending if you’re an Asiatic or African rhino). At some point you have to just shut up and try to do something.

That something for Berenger (so vividly and empathetically portrayed by Breitbarth) is to hold on to his humanity with everything he’s got, which turns out to be a whole lot more than he or anyone he knows could have guessed.

Galati pitches the mounting intensity with skill, and he gets able assistance from a cast that includes the always fascinating Danny Scheie as a newspaper editor and Rona Figuero as Daisy, a seemingly sensible, sensitive person and (we think) good romantic match for Berenger. The fact that she has a gorgeous voice and keeps singing “Non, je ne regrette rien” is a definite plus. Until it’s creepy.

ACT might consider selling red baseball caps in the lobby. But instead of the usual white-stitched words, they could read as a manifesto: “I will not capitulate!”