The cast and composers of Spring Awakening. Bring on the awards. Photo from Broadway.com

The official 2006-2007 Broadway season opened with Kiki & Herb: Alive on Broadway last August (the show comes to American Conservatory Theater in June) and closed May 9 with the opening of 110 in the Shade (the 1963 revival of the Jones/Schmidt musical).

It’s no secret that among those 33 shows, my favorite is the musical Spring Awakening, which this week picked up the first of what could be a raft of awards. The Duncan Sheik/Steven Sater show won the New York Drama Critics’ Circle and Lucille Lortel awards for best musical. It shared the Lortel award with In the Heights.

Boy was it hard to leave New York City. The day after I arrived, the city was hit by a nor’easter (a nice name for a Category 2 hurricane-type storm) that dumped, so I’m told 5 ½ inches of rain on the city in one day. Most of it, I believe, was in my shoes (which were ruined, in case you care).

But by the end of the week, the weather had turned into glorious spring. The pear blossoms on West 69th Street had blossomed, and even the waiters at the legendary Broadway diner the Edison Café were nice (actually, they were rude and unhelpful).

Even a hurricane, sorry, nor’easter, couldn’t keep me from the theater. My first show, a Sunday matinee, was at the Belasco Theatre for a revival of R.C. Sherriff’s 1928 play Journey’s End.

This seems as good a place as any to begin my review of the Broadway shows I sampled. Today I’ll talk about the best three shows (of eight) I saw. Check back later this week to hear about the others. Journey’s End is an extraordinary play about life in a dark (and we’re talking DARK) trench in France during World War I. Sherriff, a veteran of the war, was a British insurance salesman who turned his life experience into a play – an extraordinary play that sidesteps politics and goes straight into the heart of soldiers preparing for battle.

It’s almost impossible – at least it was for me – not to think about soldiers in Iraq while watching British hunk Hugh Dancy (the tormented captain), Boyd Gaines (a truly great performance as the older, wiser lieutenant), Stark Sands (as the earnest newbie) and Jefferson Mays (as the crackerjack cook).

Director David Grindley’s production is dimly lit but extraordinary, and I wouldn’t be surprised if regional theaters around the country start “rediscovering” the play after its current Broadway exposure.

The biggest surprise of the week was how much I liked the revival of Stephen Sondheim and George Furth’s Company starring Raul Esparza as Bobby (below), the perennial bachelor surrounded by an assortment of wry, bitter married friends.

This is director John Doyle’s second Sondheim done in the typical Doyle fashion. Like Sweeney Todd before it, the actors also serve as the orchestra. Here, that means all the married people play instruments, while bachelor Bobby plays nothing but the kazoo (until his breakthrough number, “Being Alive,” which he begins by playing the piano at long last).

I heard complaints that the supporting cast was wan, but I thought they were terrific, especially Barbara Walsh (delicately sidestepping Elaine Stritch’s formidable shadow) as Joanne and Elizabeth Stanley (with her deer-in-the-headlights face) as April.

But it’s Esparza’s warmth and humor that creates a vibrant center around which the show swirls. This is the first time I’ve seen Company that matched the production I envisioned in my head every time I listened to the original cast album (and I listened to that album a lot). If you read previous blogs, I dogged Esparza on the new cast album, but after seeing his performance and having him spit on me (I was in the third row center), I have no complaints.

And now to the reason I planned the trip to New York in the first place: Spring Awakening. My expectations were high, which is never a good thing. Expectations only lead to inevitable disappointment. Having been a huge fan of Duncan Sheik since Day 1 and of the original cast album since its release last December, I suspected I would love the show. 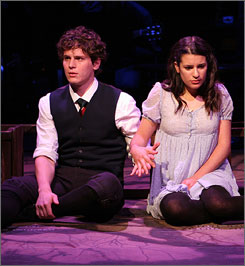 And so I did. But here’s the really good news: the show is even better than I had imagined. Sheik’s music and Steven Sater’s lyrics as well as his adaptation of the Franz Wedekind play of the same name combine to create the most pleasing pop-rock score to come from a Broadway show (OK, it’s not a long, distinguished list, but still).

The show has been beautifully and rigorously directed by Michael Mayer and choreographed by Bill T. Jones, and the young cast (all in their 20s or younger) is extraordinary. This is one of those cases of musical alchemy – all the right ingredients coming together to create something new. There are whiffs of Rent here and there, but on the whole, the music is far more appealing and the story more genuinely moving (which is to say not nearly as maudlin).

And I’ll even go so far to say that this is the best musical adaptation of a play since My Fair Lady.

I could go on and on about the actors, but let me just say that the Jonathans _ Gallagher Jr. and Groff _ as Moritz and Melchior respectively are extraordinary, and Lea Michele as Wendla has a stunning voice (as does the entire cast). I also have to mention Jonathan B. Wright as Hanschen, a lad with a healthy opinion of himself. Wright is hilarious (and for some reason, his name was left off the CD insert on the original cast recording) and deeply strange at the same time. A great combo.

Spring Awakening is moving in ways I didn’t expect, and I find myself returning to the cast album again and again.

Things I’m excited about at the moment:

– The new Chorus Line cast recording (stay tuned for more on that one), which came out last week.

– Two off-Broadway musicals making their way to Broadway: Spring Awakening and Grey Gardens. The good folks at Broadway.com have posted a world-premiere video from Spring Awakening, a musical by Steven Sater and popster Duncan Sheik (I’m a big fan —

interviewed him on his tour bus earlier this year). Watch the video for “The Bitch of Living” here.
This is the first I’ve heard of the score, and it sounds neither like High Fidelity nor Legally Blonde. It sounds like, well, Duncan Sheik, and that’s always good in my books. And the video is actually sort of funny in a Dead Poets Society-meets-‘N Sync -meets-Rock ‘n’ Roll High School sort of way. Very exciting.
On his blog, Sheik says he’s hoping for an early December release for the cast album.

As for Grey Gardens, I’ve only heard the cast album, but Act 2 sounds especially promising, and Christine Ebersole sounds better than ever. If you haven’t seen the documentary that inspired the musical, go rent it right now.

Like an idiot, I missed McDonald’s two-night stand at Bimbo’s in San Francisco. As she did at her SF gig, the luminous McDonald sang songs from her new CD, “Build a Bridge” (read my review here) as well as some musical theater chestnuts. My favorite track from the CD (and her most passionate performance in concert) is Laura Nyro’s “Tom Cat Goodbye.” My only disappointment with the show was that she didn’t sing Rufus Wainwright’s “Damned Ladies.”
Hard to complain too much when you consider the songs she did sing: “It Might As Well Be Spring,” “Hey Buds Below,” “When Did I Fall in Love?” and an “Edelweiss” to melt the hardest of hearts.