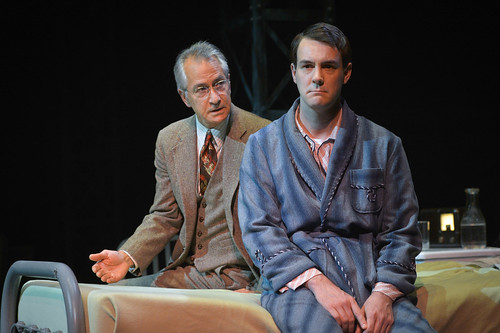 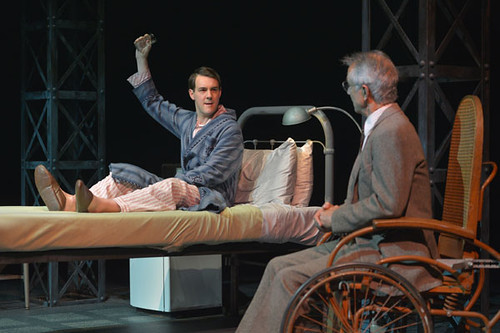 David Strathairn is a globe-trotting, mystery-solving librarian in Glen Berger’s Underneath the Lintel, a solo show at American Conservatory Theater’s Geary Theater. Photos by Kevin Berne


What’s the haps in Hoofddorp, you ask? Well, for a small town in Holland, things are pretty dull, actually, thanks for asking. The good news is they’ve got a heck of a library in Hoofddorp, complete with the Dewey decimal system and time-stamped check-out cards and everything. We know this because a former librarian – we never find out his name – desperately wants to tell us about a life-changing adventure that was triggered by something that happened on an ordinary day on the job at the library.

It seems an overdue book made its way into the overnight bin (which is NOT supposed to be for overdue books, but it happens). But as our librarian was fussing (as librarians are wont to do), he discovered something interesting: this little Baedeker’s was 113 years overdue. If the book was returned in 1986 (as we’re told it was), that means the book was checked out in 1873. Adding to the intrigue, the book was checked to someone whose name is indicated only by an initial: A.

Tormented by his inability to fine the irresponsible book checker-outer, Librarian turns his focus to the notes in the margins of the book and to a laundry claim ticket he finds tucked in the pages that turns out to be a from a London outfit. Having never ventured out of his home country, Librarian can’t resist the urge to do a little exploring. And once he finds a pair of unclaimed trousers (never cleaned because of their deplorable condition), the adventure begins in earnest.

So goes Glen Berger’s Underneath the Lintel, a solo drama now at American Conservatory Theater’s Geary Theater. The inestimable David Strathairn is the Librarian, complete with mild Dutch accent (he sounds a little like Tim Conway’s Mr. Tudball on the “Carol Burnett Show”) and the growing enthusiasm of globe-trotting storyteller on a mission to discover the elusive A. It’s a journey that takes our humble fussbudget to China, Australia, America (where he does some adorable swing dancing in New York) and Germany among other places, all of which he conveys to us through an intermittent slide show complete with music he plays on an old cassette recorder. It’s actually charming to watch a talented librarian – depicted here as sort of a superhero with mad research skills – get so excited about finally stepping into real life.

It’s when his sleuthing starts spanning centuries that I started losing interest. There’s a suggestion that A could be the mythical Wandering Jew – a cobbler who taunted Jesus on his way to his crucifixion and was condemned to walk the Earth forever – and that means there’s no real solution to the central mystery (though it is amusing to think of Ahasuerus checking out a Baedeker’s in Hoofddorp).

Director Carey Perloff’s production also threw me off balance. The show begins with the Librarian taking the stage (Nina Ball’s marvelous set design crams all kinds of theatrical junk, from costumes to props to chandeliers to barely visible backdrops), addressing his audience and telling them he’s here for, as the play’s subtitle puts it, “an impressive presentation of lovely evidences.” On his fact-finding journeys, he has accumulated papers and items, all of which he has meticulously tagged and numbered. He occasionally shares his slides and plays his tape recorder, but mainly he tells his story.

But then he starts finding pieces of evidence in tucked-away places around the stage. And soon, there are lighting and music cues that he’s not controlling. So what begins as a real-life lecture demonstration becomes a fully designed theatrical presentation of which the Librarian is only a part (not the sole focus nor the master of the story).

Underneath the Lintel is a sweet, slightly sappy existentialist musing that ultimately takes the long view of time and the universe and man’s conversely important and insignificant place in it. Pondering such things is never a waste of time, though this production, in spite of Strathairn’s abundant charms, has the power to make 95 minutes feel longer. The end should be an epiphany, but it’s less profound, more pleasant, and that’s not quite enough for such an awfully big adventure. 
Wajdi Mouawad’s drama Scorched is a riveting, affecting and thought-provoking play – in its last 30 minutes. To get there you have to spend more than two hours slogging through layers of back story, stilted acting and rigid dialogue (the translation is by Linda Gaboriau). You have to ask yourself, is the slog worth it? I’ll let you know in a minute.

This American Conservatory Theater production directed by Artistic Director Carey Perloff features a wonderfully baffling performance by Academy Award-nominee David Strathairn as a Canadian notary who has been named executor of a late client’s estate. The performance is wonderful because Strathairn is among the only actors on stage who seems to feel any depth to his character. Everyone else is just plain intense. But Strathairn, though he has moments of intensity, is warm and, unlike most everyone else, on a relatably human scale. His Alphonse Lebel clearly cared a great deal for his late client, the mother of two surly twins, and his inability to complete a sentence with some sort of malapropism is endearing (if not remotely believable). That’s what’s baffling about the performance – the slight absurdity of the character doesn’t really make sense in the world of utter intensity that Mouawad is creating. But it’s so nice to have comic relief, albeit slight, that you welcome Strathairn’s every moment on stage (which amounts to not nearly enough moments).

Mouawad is unfurling an epic family story here that begins in the 1950s in an unnamed Middle Eastern country (Mouawad is Lebanese Canadian, so we can probably do the math here) where Nawal, a smart and defiant young woman (Marjan Neshat) falls in love and gives birth to a son who is ripped from her arms. That woman grows up and, unlike the other women in her village, learns to read and write. She embarks on a quest to find her lost son with the help of another village woman, Sawda (Omozé Idehenre). The quest takes the women into the middle of a war between government forces and rebels, and the horrors of that war lead to a staggering number of horrifying events.

The narrative bounces back and forth between the Middle East of the past and Canada of now, where twins Simon (Babak Tafti) and Janine (Annie Purcell) are informed by the bumbling Alphonse that their recently deceased mother, the same Nawal, left them with assignments involving her homeland and the father they didn’t know was alive and the brother they didn’t know they had.

By Act 2, the play has become a mystery leading up to some sort of big revelation. Though Act 1 is almost devoid of tension (though there’s voluminous stage smoke attempting to disguise the fact), Act 2 gains momentum from the sheer force of the storytelling promising some sort of resolution. When it finally comes – through a series of hard-to-believe connections, recollections and stock characters – it’s a doozy.

Even more than the plot details, the play finally becomes about something other than the difficulty of the past (“childhood is a knife stuck in the throat – it is not easily removed,” we’re told) and the danger of the Middle East. Suddenly we’re dealing with characters holding love and hatred simultaneously, and the performances finally come to life, if only briefly. Jacqueline Antaramian delivers several difficult monologues that overflow with pain and, at long last, ground the play in something genuine and not just theatrical.

So is the slog worth it? I’d have to say yes. When you remember the play, you really won’t think much about the first two-plus hours. You’ll remember the sensation and surprising depth of the last half hour. The journey could be a lot more interesting, but the destination is ultimately worth the ride.

[bonus interview]
I talked to David Strathairn about Scorched and, among other things, his work on Steven Spielberg’s Lincoln. Read the San Francisco Chronicle interview here.