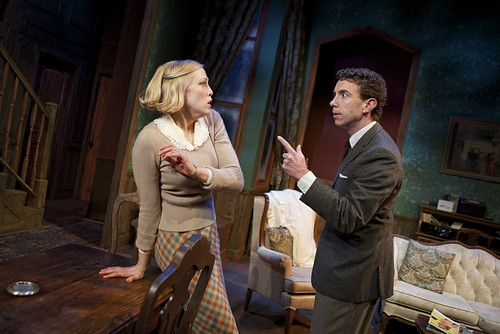 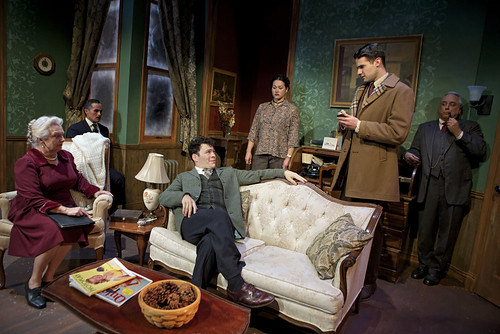 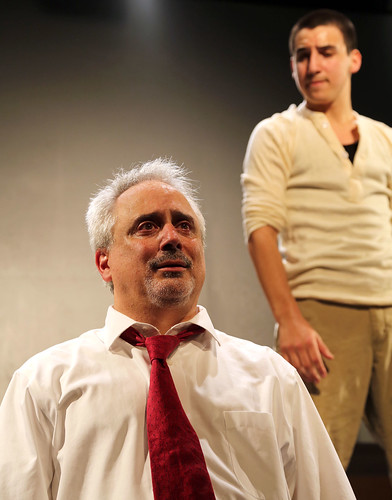 Like father like son: King Basilio (David Sinaiko, left) and Prince Segismundo (Asher Sinaiko) square off as their armies face one another in the Cutting Ball Theater production of Life Is a Dream. Below: King Basilio (Sinaiko, center) is beloved by his nephew (Matthew Hannon, left) and niece (Grace Ng), who may be his heirs to the throne. Photos by Fiona McDougall


What a rare treat to have had two productions of Pedro Calderón de la Barca’s Life Is a Dream on local stages this year. First there was California Shakespeare Theater’s production (read my review here), and now we have a brisk, streamlined version from Cutting Ball Theater and its resident playwright, Andrew Saito at the EXIT on Taylor.

Both productions feature extensively adapted versions of the original script, and each reflects the personalities of both the adaptors and the producing companies. Where Cal Shakes’ production benefited from the natural setting and the poetry of the stars overhead providing counterpoint to the poetry on stage, the Cutting Ball production uses Saito’s laser eye to whittle the bulky play down to its essence, and director Paige Rogers delivers a physically exuberant production that makes up in vitality what it might lack in emotional wallop.

From the very start, this 75-minute version of the Dream comes out swinging, or should I say clapping. The actors emerge in the their underwear and scale Michael Locher’s sturdy bleachers set. All the actors get dressed save Asher Sinaiko, who plays the imprisoned prince, Segismundo. He remains in his black T-shirt and boxer briefs for most of the show, until that defining moment when Segismundo, who has fulfilled the prophecies and revealed himself to the be the savage his father feared he’d be, learns from his mistakes and begins to act through wisdom rather than impulse. 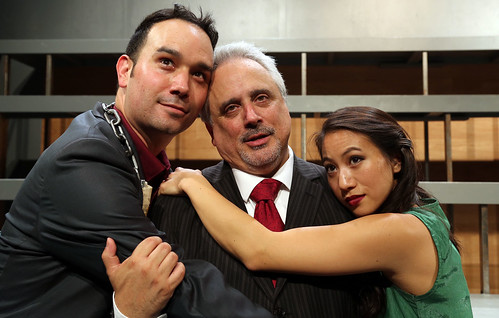 There’s a percussive rhythm to the show provided by the actors (there’s lots of clapping, stomping and patty-cake-meets-drill-team choreography for the ensemble) and by Barry Dispenza behind the drum kit. By the final battle, the beat turns downright (upright) funky, and it’s fresh.

In fact, the whole show feels fresh. Part of that has to do with Saito’s elemental adaptation, which keeps the major plot points and characters and infuses some welcome humor and a whole lot of Yiddish (kvetch, schmo, putz). In the story, many swords are drawn, but on stage, swords take the form of kazoos. And when said kazoos are not being brandished, they are being played to herald the entrance of the king (David Sinaiko), who has decided it’s time to take his potentially dangerous son out of prison and let him rule the country.

The efficiency of the bleacher set means that Segismundo can go from prison (aka under the bleachers) to power (atop the bleachers) in seconds, and with the addition of a spiffy plaid jacket to his black underwear ensemble, he’s almost even human (costumes are by Courtney Flores. Then he starts throwing people out of windows and the dream of civilization and power ends, and he wakes up back in the prison tower.

One of the nice things about Saito’s adaptation is that it feels evenly weighted among the stories. There’s Segismundo and his father (in a lovely touch, David is father to 16-year-old Asher, who is making a mighty strong professional theater debut), but there’s also Rosaura (Sango Tajima) and her father, Clotaldo (Peter Warden), though she doesn’t know he’s her father. Rosaura, with the help of the stalwart (and funny) Clarin (Michael Wayne Turner III) is fixated on exacting revenge from Astolfo (Matthew Hannon), the arrogant royal who besmirched her virtue, but he’s fixated on seizing the throne, even if it means marrying his cousin, Estrella (Grace Ng), who doesn’t have nearly enough to do in this plot.

All this unspools and resolves very quickly, but we get the gist of the plot and its theme of life as a dream and death as an awakening, with everything temporary and constantly in transition. Emotionally, the production doesn’t cut too deep, although there is a doozy of a knock-down, drag-out fight between King Basilio and Segismundo that says a whole lot about the neglected son/absent father relationship.

These adaptations of Life Is a Dream have been grandly entertaining and admirable in their attempt to focus in on the core of the play’s beauty and power. But I think I’m ready for a big, messy, unwieldy version of a Dream – big enough to get lost in and beautiful enough to want to remain lost.