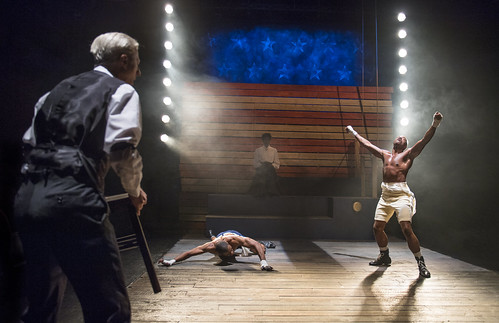 These sections of the story are incredibly powerful, even if, on Thursday’s opening-night performance, the movement and rhythms weren’t as sharp as they should be for a space as intimate and in your face as the Aurora. But there’s no denying how effective the conceit is. The impact of the fights is powerfully conveyed, but in a wholly theatrical way, which, in a way, makes them more interesting than actual boxing. Actors are allowed to sync their movement with the punch of the stream-of-consciousness dialogue to allow us inside the characters’ heads while they fight, and that is fascinating.

Inspired by Jack Johnson, the first African-American world heavyweight boxing champion, The Royale centers on the fictional Jay “The Sport” Jackson, who will emerge champion in the early part of the 20th century but only after he defeats the reigning white champion. Such a bout, though rife with marketing opportunities, also has serious repercussions for race relations in America. If he wins, it’s a triumph for the African-American community – a hero rises and conquers. But a victory could also inspire serious retaliation from white supremacist fans who might express their anger in violence. 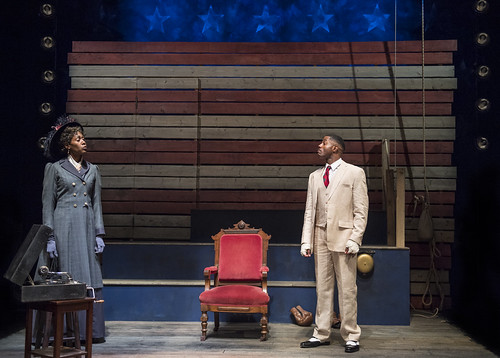 Those are the dramatic stakes, and they’re big. When we meet Jay (Calvin M. Thompson) in the ring, it’s clear that he’s got superheroic skills in the ring, with his only real flaw being an ego that can get in the way of his natural instincts. He deftly pounds his opponent (Satchel André as Fish, a fine fighter who eventually becomes an ally) and learn that Jay can pretty much do whatever he wants. His victory against Bixby, the white champ, seems assured, but he has to contend with the weight of that victory, which is conveyed through others in his world: his coach (Donald E. Lacy Jr. as Max), his sister (Atim Udoffia as Nina) and his (white) promoter (Tim Kniffin) as Max.

Jones’ production is intriguingly textured, both in performance and design. Richard Olmstead’s set creates a sort of American flag from rough planks and stars that serves as the centerpiece of the action, while Kurt Landisman’s lights effectively covey the ever-changing shape of the ring in which Jay is fighting. Courtney Flores’ period handsome costumes provide the strongest link to the era and help further flesh out the character of Jay, although the whole production has a timeless, almost dreamlike quality to it.

That this is a sports-centered drama that doesn’t employ the usual tricks (aside from a crusty trainer and a defining childhood drama) is a huge advantage. Ultimately, The Royale feels like a resonant, percussive tone poem that beats to the rhythm of an America still finding its feet when it comes to equality and decency – it’s an existential prizefight that, more than a century later, has yet to yield any winners.