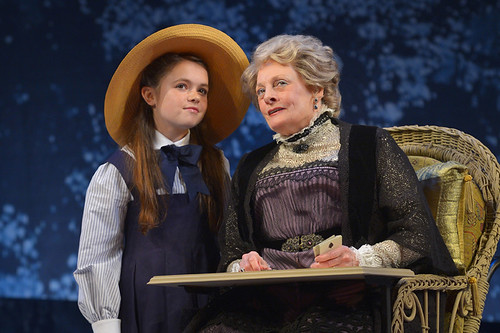 Madame Armfeldt (Dana Ivey, right) tells her granddaughter, Fredrika Armfeldt (Brigid O’Brien), about how the summer might smiles three times in Stephen Sondheim and Hugh Wheeler’s A Little Night Music, an ACT production at the Geary Theater. Below: Emily Skinner is Countess Charlotte Malcolm, an embittered wife who sings the fierce song “Every Day a Little Death.” Photo by Kevin Berne


In the 1970s, Stephen Sondheim was on some kind of roll. From Company to Follies to Pacific Overtures to Sweeney Todd, the decade found at the peak of his considerable powers. He was – and is – a musical theater superhero, but in the midst of all that musical and lyrical genius, he dropped a nearly perfect show that was at once a classic musical – operetta almost – and completely contemporary.

A Little Night Music is a dazzling combination of light and funny, clever and romantic with sharp and incisive, deep and dark. The show has elegance and a light touch with an undercurrent of regret, sorrow and misery to keep it from floating away.

American Conservatory Theater is producing Night Music, and though there are some problems with the production, it provides a stellar opportunity to see the show’s genius at work. I reviewed the production for the San Francisco Chronicle. Here’s an excerpt.

Leading men Patrick Cassidy as lawyer Frederik Egerman and Paolo Montalban as dragoon Count Carl-Magnus Malcolm both cut striking figures, but their acting and singing tend toward the stolid or overly cartoonish. They are eclipsed by their female co-stars who, in scene after scene and song after song, handily take control of this “Night Music.” Of the men, only Justin Scott Brown as Frederik’s frustrated, lovelorn son, makes a lingering impression.

Karen Ziemba as fading stage actress Desiree Armfeldt gets to be world weary (“The Glamorous Life”), funny (“You Must Meet My Wife”) and gently heartbreaking (“Send in the Clowns”), all the while managing to be completely lovable. Desiree is aching for “some sort of coherent existence after so many years of muddle,” and Ziemba makes us root for her success. 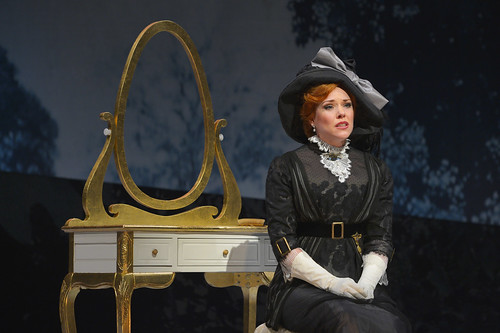