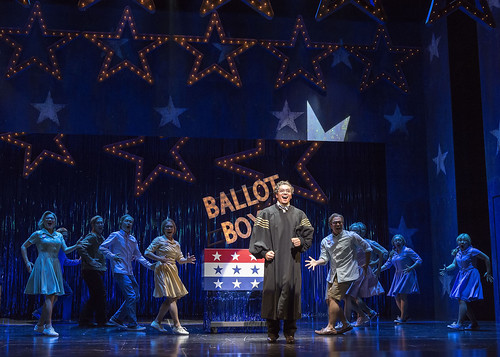 
Remarkable. Inspiring. Hilarious. Moving. There aren’t enough descriptive words to fully express just how wonderful and fascinating and exhilarating it is to experience Soft Power the new musical by David Henry Hwang and Jeanine Tesori now at the Curran Theatre.

Forget Go-Go’s pop musicals (sorry Head Over Heels). Hit the road, lame movie-to-musical adaptations (looking at you, Walk on the Moon). This is what it’s like to be in the presence of musical theater with bracing originality, thrilling artistry, abundant intelligence (and humor) and expert execution. Watching Soft Power feels important – it’s tremendously entertaining and thought-provoking, but it also feels somehow bigger than the average show. This stage contains a larger conversation about the musical theater form itself, our evolution as truly compassionate humans and about the state of our nation. This is easily the most important musical since Hamilton.

Describing Soft Power is challenging primarily because it has so much going on, which is one of its many charms. There are three main ingredients here: The King and I, Hillary Clinton’s failed presidential campaign and China’s quest for “soft power,” which is the notion of ideas, inventions and culture that change the way people think.

This is also described as “a play with a musical,” and that’s appropriate because the musical that eventually transpires is dependent on the short play that precedes it. Once that musical arrives, audience members find themselves in high-concept territory because you’re not just watching a musical. You’re watching, essentially, a reversal of The King and I from the 22nd century. No more is the white lady in the foreign country taming the barbarians and teaching the king how to govern his own people. In this case, the cast is primarily Asian playing blonde, gun-toting Americans who are tamed by the kind-hearted Chinese guy, who also happens to fall in love with Mrs. Clinton.

Questions of appropriation and representation – those catch phrases that we hear so much about these days – are not merely asked here, they are considered and corrected and satirized. This is not a show that debates issues. It embodies them. It makes fun of them, pummels them, satirizes them, eviscerates them. 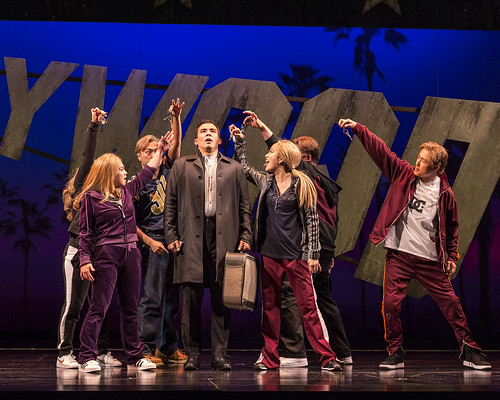 This immersive 2 1/2-hour experience is filled with laughs and parody and homage, both in Tesori’s lush, gorgeous score, with its echoes of Rodgers and Hammerstein and Sondheim and so much more, as well as in Sam Pinkleton’s choreography with its pop-meets-de-Mille exuberance. Hwang’s book is sharp and pointed, but what’s so extraordinary about Soft Power is the way the show also works as musical storytelling. Just as one of the characters complains about the political incorrectness of The King and I she heaps praise upon that show’s beautiful score and emotional storytelling, or, as she describes it, the show’s “perfect delivery system.” You might not like aspects of King (like its caucasian perspective on Asian culture), but once the music starts, your heart surrenders. Something like that happens here. Tesori’s score, which is so wonderfully different from the superb work she created in shows like Caroline, or Change and Fun Home, bursts with life and humor and beauty. Hwang’s lyrics (with additional lyrics by Tesori) are direct and insightful.

Director Leigh Silverman manages the impossible here. She creates an emotional framework that allows Hwang and Tesori to careen all over the place while still creating characters and stories we care about. Just when it seems the musical will fully flip into full-on political buffoonery, we’re drawn back into human-scale emotion. And here’s another astonishing thing: everything here feels relevant, from the deconstruction of good ol’ American musical theater to the bashing of the television personality with all the bankruptcies who beat Hillary (he is referred to as the president or as “dear leader” but is never referred to by name). Silverman, Hwang and Tesori have taken our world – what feels like this exact moment – and turned it into art on a grand scale. How did they do that? When they get to the inspirational number at the end, it actually IS inspirational because it feels as if the actors are reaching down to your seat and offering you that little spark, that little push, that little reminder to keep going.

When Act 1 ends, and you’re thinking, “What in the world did I just see?” and then you consider this: “There’s no way Act 2 can continue on this tightrope. As with so many musicals, Act 2 will deflate the balloon.” But then Act 2 happens and it’s even better, and all those courageous leaps come together with emotional and intellectual pay-off.

Huge credit must go to the dynamic cast headed by Conrad Ricamora as our hero from China, Alyse Alan Louis as Hillary Clinton and former Bay Area stalwart Francis Jue as a playwright named David Henry Hwang. They are supported by an outstanding ensemble that can handle every tonal shift thrown at them and then some.

Set designer David Zinn, lighting designer Mark Barton and costume designer Anita Yavich bring clarity and humor to the stage as well and keenly differentiate between our real 21st world and the future musical world of the 22nd century. The flashy stage is often like the circus meets grand opera but with many, many, many more guns.

Soft Power (which can actually be defined by its title) makes it very clear that democracy may break your heart, but this brilliant show also has the very real power to restore your faith in art as reflection, renewal and, perhaps most importantly, revolution.