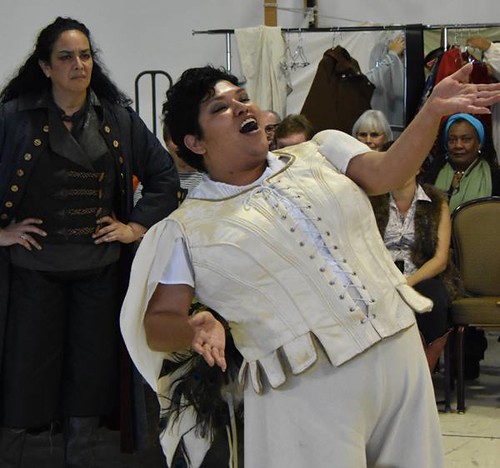 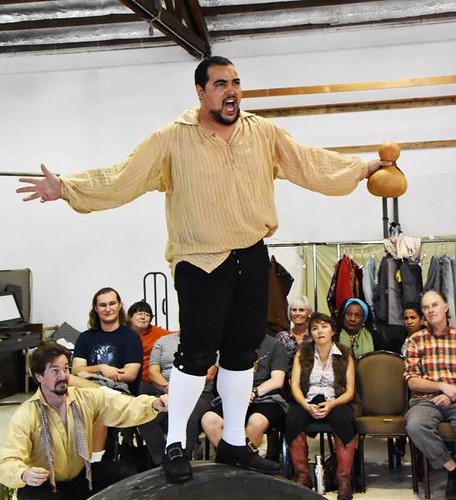 Any discussion of an Ubu play has to begin thus. When Alfred Jarry’s Ubu Roi opened in 1896, the first word of the play was, “Merdre!” (loosely translated into, “Shittr!”). And the play has been notorious ever since.

Shotgun Players, never a troupe to shy away from notoriety, takes on Ubu as its free theater in the park production this summer. Writer Josh Costello has riffed on Jarry’s Ubu plays (there were three) to come up with Ubu for President, which had its premiere on a sunny, warm Saturday afternoon in Berkeley’s beautiful John Hinkel Park.

The political comedy – more comedy than politics, thankfully – is essentially about stupid people and even stupider politics. In other words, it’s incredibly timely.

Jarry set his tale in Poland, or, as he wrote, “which is to say, nowhere.” Costello takes the Jarry-rigged wit further by setting it in a place called Fugalle (forgive the spelling if incorrect), which means anything pertaining to that country can be described as “Fuggin” as in the “Fuggin people” or the “Fuggin president.” And you know what? Gets a laugh every time.

The idea is that not-so-good King Wenceslas and his family have been on the throne for too many generations and it’s time for the people to adopt democracy and choose their own president.

So the King (Gary Grossman) decides to run. So does Pa Ubu (Dave Garrett), a retired captain of the dragoons whose favorite expression is, “By my green candle” (often followed by a grabbing of his naughty bits). The other candidates are the king’s daughter, Princess Buggerless (the extraordinarly sharp and funny Casi Maggio, above), a trippy hippie named Ming Jamal Joaquin Wounded Knee Goldstein (a pitch-perfect Sung Min Park) and an ancient man named Lesczynski (Alf Pollard).

Ubu’s ambition is ignited by his aggressive wife, Ma Ubu (Carla Pantoja), with her extra-wide hips and her extra-tall pink beehive, and his candidacy is aided by one of the king’s former henchmen, Capt. MacNure (Ryan O’Donnell), whose name, as you might imagine, is often shortened.

The Ubus are delightfully vile, constantly swearing – “Pschittabugger and buggerapschitt!” By God’s third nipple!” “Rumpleshitskin!” – and fighting. “I’m going to rip open your gut basket!” Ubu shouts at his wife. On the campaign trail, Ubu not only kisses a baby, he makes out with it before tossing the babe on its wee head, and there’s a generous supply of farting and belching to be sure.

Director Patrick Dooley only barely contains the manic energy of his cast (which also includes Marlon Deleon, Mega Guzman, Raechel Lockhart and Jordan Winer), which is as it should be. Oh, and there’s music. This is a musical…of sorts. Old tunes such as “Good King Wenceslas,” “Oh, Susannah” and “Shenandoah” are outfitted with new lyrics (by Costello and Garrett) and given spirited accompaniment by cast members on various horns and guitars (musical direction by Dave Malloy).

My favorite lyrics came in a version of “My Darling Clementine” as various forces are gathering for war. The soldiers sign “We’re the phallus for the palace” and the Princess sings, “Kill the dipstick with the lipstick.”

One of the funniest bits of shtick comes when O’Donnell and Park’s characters are chained in the dungeon and discover the only way to survive is to capture and kill rats, but the only way to do that – and then feed each other – is with their feet, which they proceed to do.

Costello’s snappy script is peppered with crudity and Shakespeare. Happily he retains Jarry’s “debraining machine,” which seems awfully au courante and makes one wonder just how many debraining machines remain in operation at the moment. Probably too many to count.

The players all seem to be having a grand time. Garrett and Pantoja lustily fill the Ubus’ pschit-stained shoes, and Maggio’s pink-loving, ultra-princessy princess is a standout. O’Donnell’s faithful sidekick is always worth watching just for the play of emotions on his face, and Park’s peace-loving, sex-loving, plant-loving hippie is so sincere he’s almost scary.

At two hours, the show is exactly long enough. And with a cast this good and a play this funny, you may just bust your gut basket.

Ubu for President continues through Sept. 2 at John Hinkel Park, Southampton Avenue off The Arlington in Berkeley. Shows are at 4 p.m. Admission is free but campaign contributions are gladly accepted. Call 510-841-6500 or visit www.shotgunplayers.org.