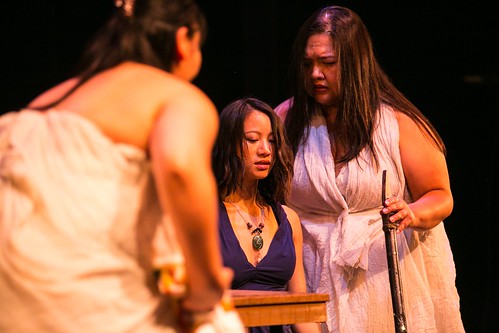 
When one of the Bay Area theater scenes most reliably inventive, resourceful and rewarding directors takes over a theater company and begins making changes, you pay attention. Jon Tracy is now at the helm of the Berkeley-based TheatreFIRST, a small but ambitious company that has had bumps and triumphs over the last 20 years while building a reputation as a haven for actors and playwrights to share voices from around the world.

The company’s new season – complete with a new mission to give “voice to all communities” guided by the principle of “aggressive diversity” and telling the world’s stories through “a mix of centralized and decentralized viewpoints” – officially launched on Monday with the world premiere of San Francisco playwright Rob Dario’s Bagyó, a fantasia inspired by The Tempest and the history of Southeast Asia.

The most powerful moments come not in the lyrically obtuse dialogue from playwright Rob Dario but in the dance moments staged by director Bridgette Loriaux. One particularly dazzling dance has all the performers wielding sabers/sticks adorned with little lights (let’s call them lightsabers) and another sees a lost young woman (Grace Ng as Miranda) falling in love with an American soldier (Soren Santos as Danny). 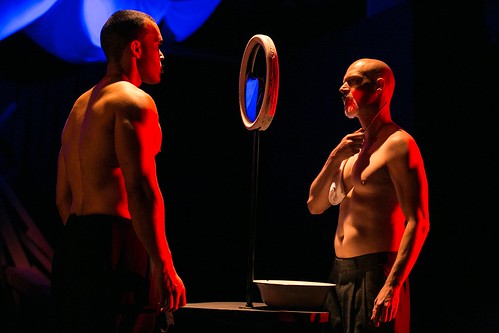 There’s also great beauty in the singing we hear, particularly by Jennifer Jovez and Marsha Dimalanta as sisters (Miranda’s sisters? Spirit sisters? Cooking show host sisters?). When they sing a lullaby in Tagalog (written by Dimalanta) all the confusion that’s built into the story – is it a dream? is it theater? is it extended metaphor linking the conflicts of history and families? – melts away and the Live Oak Theater is awash in beauty.

Trying to follow Bagyó with The Tempest as a guide only takes us so far. “Bagyó” means storm in Tagalog, so there’s that. There’s a direct parallel with Shakespeare’s Miranda and with this one, although Dario’s heroine is a warrior in her own right attempting to slice through the fog of her confusion. Palarin, Miranda’s father, played by Richard Robert Bunker, is a mean and magical presence à la Prospero, but his true function as “governor of the island” is never clear. The hulking warrior Lintik (Ed Berkeley) is Ariel-like, and Iwaksi (Wes Gabrillo) has his Caliban-ish moments but is definitely human, though he’s referred to as monstrous. Certainly soldier Danny is a Ferdinand stand-in, although his best moment comes in the show’s more historical vein when he delivers speeches related to the U.S. relationship with Southeast Asia, first as President William McKinley, then as LBJ and finally as President Obama.

But the historical blur is just that – blurry. Given that it never feels we’re on an island related to a specific country and that the represented invaders – Spanish, French, Chinese – are rather clownish, notions of war and colonization never quite come across seriously.

The biggest blur, however, is the one obscuring the relationship between Miranda and her father. Apparently there’s a buried-in-the-past secret involving her mother (a ghostly Krystle Piamonte who gives birth, at the start of the show, to a … pineapple). Although that secret is supposedly revealed, I have to say I’m not clear exactly what it was or what actually happened or if it relates to the story in a strictly personal way to Miranda and Palarin or if there’s historical significance as well.

There’s a lot of that confusion here, much of it intentional as multiple languages mix with music and dance and modern and ancient, and that can be entertaining, especially as embodied by the appealing and talented cast. But by the show’s end, confusion wins out over any kind of clarity characters might have achieved (or not) as they worked their way through storms both literal and figurative.

FOR MORE INFORMATION
Rob Dario’s Bagyó continues through Nov. 5 in a TheatreFIRST production at the Live Oak Theater, 1301 Shattuck Ave., Berkeley. Tickets are $20-$25 or visit www.theatrefirst.com.