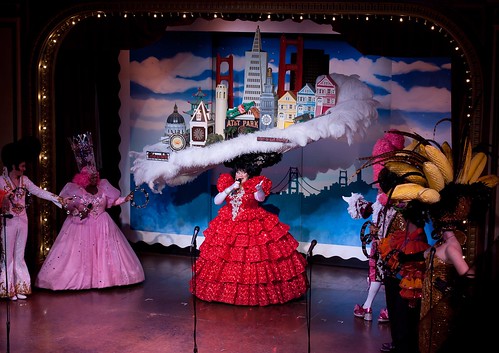 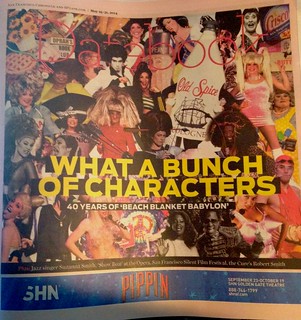 There’s no big anniversary, but there’s still something to celebrate. Steve Silver’s Beach Blanket Babylon is going on 36 years old and is brighter, fresher and funnier than ever. Members of the press were invited to come check out the show recently, and it’s easy to see why producer/co-writer Jo SchumanSilver and director/co-writer Kenny Mazlow are eager to spread the word that the country’s longest-running musical revue is in tip-top condition.

At this point, Beach Blanket is a reliable brand. You know you’ll get a few things when you head to the Club Fugazi, nestled cozily in bustling North Beach. You’ll get broad comedy (often delivered by comic broads), maniacally merry music from every era (Bill Keck is the musical director), fantastic (in every sense) costumes topped by towering hats and the precision popping of popular and political culture. As much as the show changes to accommodate current events and personalities, some things never change. Snow White looks for love and, in the end, turns into Madonna – complete with Jean-Paul Gaultier boob cones – and flies over the audience.

The current edition of Beach Blanket, in addition to some hilarious and timely skewering, finally lands on a way to make that Madonna makeover relevant. Much like the recent “The Power of Madonna” episode of Glee, Madonna is used to represent the ultimate in female empowerment. She’s a pop culture survivor who has remained relevant (relatively speaking) on her own terms and is a role model for women everywhere – at least that seems to be where her image is heading at the moment. Beach Blanket latches on to that, and when Snow White emerges as Madonna, she’s singing a re-worked version of “Defying Gravity” from Wicked, which makes the flying make even more sense. In the tradition of the show, however, the title of the song is now “Surviving Gravity” (look, ma, no chicken arms here!).

Madonna is taking her place in the big pop culture pantheon, so it makes even more sense to have her marry Elvis at show’s end.

From the very top of the 90-minute show, the pop-culture references pile on. Mr. Peanut (one of Silver’s signature Beach Blanket figures) shows up carrying a giant iPad. Within minutes, the stage is hosting a flashback to the Summer of Love as Mr. Peanut morphs into a sort of Jerry Garcia figure while songs from Hair let the sunshine in. The Beatles are there, and so is a woman with a Haight-Ashbury street sign sticking out of her head.

When Snow White (played by Shawna Ferris) visits Rome, her entrance is now heralded with “Be Italian” from Nine, and for some reason, Rome leads to the first big political routine involving 1950s-style Bill and Hillary, Schwarzenegger, Nancy Pelosi, John McCain, Sarah Palin, and Barack and Michele Obama. All of these politicos return toward the end of the show for another new showpiece built on Les Miserables. Fannie Mae, Freddie Mac and the Lehman Brothers join the pity party, but the real triumph of the bit is that the Obamas come out wielding swords and hope – could the reelection campaign be starting at Club Fugazi? Of course we also get the comic wonder of Curt Branom’s lisping, mincing King Louis and the powerhouse vocal stylings of Tammy Nelson (doing her utmost to fill the shoes – and hats—of the dearly missed Val Diamond). But the Beach Blanket MVP is Renée Lubin (seen at right as Am I Blue Lady, photo by Kevin Berne), who is in her 25th year with the show. Still in great voice and fine comic form, Lubin is the show’s star and a clear audience favorite. Her duet with Phillip Percy Williams on “I’ll Be There” is a musical highlight.

Special mention must also be made of Doug Magipong, who is celebrating 20 years in the show. He heads a Michael Jackson tribute that is completely straightforward – no jokes – as he leads the cast through the “Thriller” choreography (the whole high-energy show is choreographed by Mazlow with assistant director/choreographer Mark Reina).

From nine high school senior finalists — three in each category of dance, acting and voice — three were selected as recipients of a $10,000 scholarship toward their college education.

Acting: Patrick Varner from Montgomery High School in Santa Rosa performing a monologue from Edward Albee’s The Goat or Who Is Sylvia?

Beach Blanket Babylon is currently in the midst of an anniversary celebration that involves 35 special performances, each with a new musical number as well as a special tribute to creator Steve Silver. Leave it to the country’s longest-running musical revue –34 years and counting — to nail the political atmosphere.

Steve Silver’s Beach Blanket Babylon, always updating characters and songs to keep up with current events, has added Barack and Michelle Obama, John and Cindy McCain and Sarah Palin to its roster.

(all photos by Kevin Berne)

BOTH:
It’s Barack around the clock tonight

BARACK:
Got the facts
It’s plain to see
Joe Biden’s the Vice President for me
We want change

MICHELLE:
He’s not messin’ around

BOTH:
It’s Barack, Barack around the clock tonight!

McCAIN:
“I come from Arizona
Got the energy
I got a Barbie doll wife
Rich as can be
They say I’m too old
So to shake up the scene
I picked a woman vice president
A real beauty queen.

PALIN:
I am the Alaskan governor
But now things are wild
A mother of five children
And one who’s with child
Okay, I won a pageant
But this chick ain’t dumb
I’m full of sass
I’ll kick your ass
And might use my gun 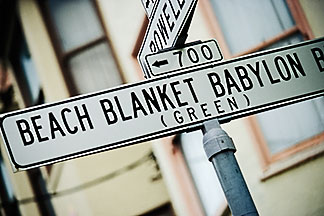 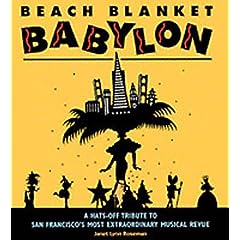