There’s no getting around the fact that for more than 40 years now, Dolly Parton has been a bright light of show business. She quickly transcended her beginnings on country radio and corny country TV shows to become a pop icon, movie star and savvy businesswoman.

She’s one of the most recognizable women in the world, and the curious thing is that under all that hair, makeup, glitz and God-given curviness, Parton is an extraordinary talent. Her voice is so unique it’s immediately recognizable and difficult to imitate, and her songwriting skill – which is criminally underrated – will eventually have its own section in the Great American Songbook.

The 62-year-old Parton was in the Bay Area Tuesday night at the Greek Theatre on the UC Berkeley campus as part of her Backwoods Barbie tour. As amazing as she was – and boy howdy was she amazing – I was disappointed she didn’t mention the latest feather in her cap: Broadway composer.

One of Parton’s biggest movie and musical hits, 9 to 5, is heading to Broadway. In addition to the title song, she has written about 20 new songs for the show, which is directed by Joe Mantello of Wicked fame. The new musical has its world premiere Sept. 3 through Oct. 19 at the Ahmanson Theatre in Los Angeles before heading to Broadway’s Marriott Marquis Theatre. You can get tickets to the L.A. run here. Check out the site for the Broadway run here. Alison Janney heads the cast in the role played on film by Lily Tomlin.

Parton has always had a flair for the theatrical, so it’s not at all surprising she’s finally made her way to musical theater. And reports from rehearsals in L.A. are that Parton is so enthused about the project she shows up early and stays late whenever she can.

But rehearsing a Broadway show must be difficult when you’re taking your own show on the road.

Sadly, the crowd at the 8,500-seat Greek was not at capacity. Reports are that it was around 50 percent – a disappointing turnout for a living legend – but that was a wildly enthusiastic 50 percent, a fact Parton acknowledged when she said there may have been more people at the L.A. shows a few nights previous, but they weren’t as loud, as welcoming or as attractive.

Even before much of the crowd had taken its seats, indeed before the clock had even struck 8, Parton was rarin’ to go with “Two Doors Down,” which led directly into one of her rowdy pop-honky tonkers, “Why’d You Come In Here Lookin’ Like That?”

In between songs, while courteously taking flowers from fans and chatting with some kids in the audience (who know her as godmother to Miley Cyrus aka Hannah Montana), Parton showed off her glam high heels to the front few rows and, as a result of her short, spangly gold skirt, revealed more than she wanted. “Ohhh,” she squealed. “I think I just showed him the box office!”

Whether singing one of her classics (“Jolene”) or covering someone else’s (John Denver’s revised “Thank God I’m a Country Girl”), Parton is an extraordinary performer with boundless energy. I wasn’t always convinced the vocals were entirely live, but a girl does what she needs to do, and the Teleprompters on each side of the stage ensured there would be no lyrical gaffs.

From the spirited new album she performed a cover of Fine Young Cannibals’ “Drives Me Crazy” (complete with hoedown section) and the title track, which features the lyric: “I might look artificial but where it counts I’m real.”

Playing the dulcimer she sang “Shattered Image,” then accompanied herself on the autoharp for a touching version of “Coat of Many Colors.” Then she picked up the penny whistle for the Celtic-tinged “Only Dreamin’.” Act 1 ended in blaze of gospel glory with “Brother Love’s Traveling Salvation Show” bookending a mega-medley of gospel tunes. 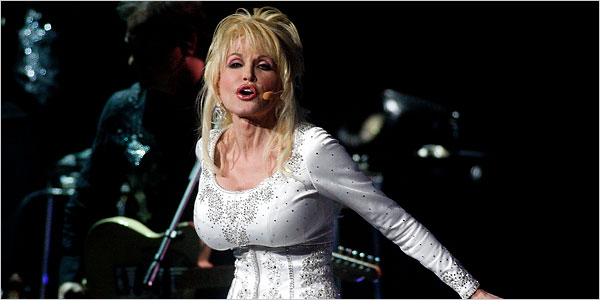 Act 2 brought a sassy red dress and some of the most impressive showmanship I’ve seen on a stage. After a rousing “Baby I’m Burning,” Parton tore through two songs from the new album – the inspirational and funny “Better Get to Livin'” complete with video starring Amy Sedaris and the forgettable but fun “Shinola” – and then got down to some serious vocals.

Surrounded by the seven male members of her band, she sang an a cappella version of “Do I Ever Cross Your Mind,” and the already Dolly-crazy audience went ballistic. She stayed on the a cappella track with her two female backup singers for a chilling, thrilling “Little Sparrow” that made you long for an entire Parton concert with no band at all.

Then came the hit parade: “Here You Come Again,” “Islands in the Stream” (with Richard Dennison), “9 to 5” (and no mention of the Broadway show) and, of course, “I Will Always Love You.”

Because of time restrictions at the Greek (city noise ordinances or some such), Parton trimmed the piano version of “The Grass Is Blue” she usually does, but she did end with her fiery new song “Jesus and Gravity.”

At one point early in the show, as the sun was setting, the sky turned a soft shade of pink over the stage as if to underscore the point that one of the best places in the universe is in the audience for a Dolly Parton show.

Here’s a pirated video from Parton’s European tour last month of “Little Sparrow.” The sound’s not perfect, but you’ll get the idea.

OK, I know this isn’t local, but I’m still excited about it. And it’s in our state and time zone, so technically it’s local.

Center Theatre Group in Los Angeles recently announced that it will host the world premiere of 9 to 5, the Broadway-bound musical based on the 1980 movie starring Lily Tomlin, Jane Fonda and Dolly Parton.

Here’s the really good news: Dolly has written the music and lyrics for the show — her first-ever musical.

The show opens next fall, Sept. 3 through Oct. 19 at the Ahmanson Theatre.

The book is by Patricia Resnick, co-author of the movie, and Joe Mantello (Wicked) is slated to direct.

“It’s been a lifelong dream of mine to write a musical, and now I have the chance to not only make Doralee sing, but to bring all of Patricia’s wonderful characters to life on stage through music,” Parton said in a statement. “I think I’m gonna like it around here.”

For information visit www.centertheatregroup.org or call 213-628-2772.