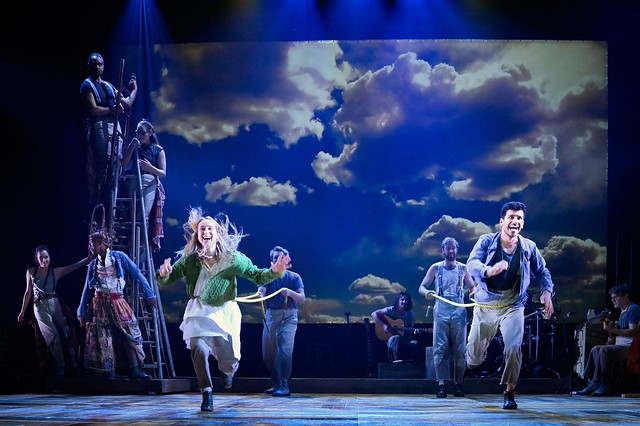 
Judging from Kate Bush’s thrilling song “Wuthering Heights,” my only reference to the Emily Brontë book of the same name, I thought the subject matter at hand was a ghostly love story. “Heathcliff, it’s me. I’m Cathy. I’ve come home. I’m so cold. Let me in your window.” I could just imagine the lovelorn ghost tapping on the window in the West Yorkshire moors and shivered those good tragic romance shivers.

When I finally got around to reading the 1847 novel (which was much later than it should have been), I discovered that there was a ghostly romance aspect to the book, but it was much darker, creepier and more violent than I had imagined. Revenge, cruelty and madness pervade the story. The cycles of abuse and racism that Brontë describes feel, sadly, very 21st century.

There have been many adaptations of Wuthering Heights – movies, series, literary take-offs – and now we have the West Coast premiere of a new stage version from the mind of the brilliant Emma Rice, whose previous work as a writer/director in the Bay Area includes Brief Encounter at American Conservatory Theater and The Wild Bride at Berkeley Repertory Theatre. Rice’s theater tends to be incredibly dynamic and raw – exuberant, striking and beautiful.

Her Wuthering Heights, now at Berkeley Rep after runs in London and New York, is all of the above. This is not a romantic take on this story, although there are several love stories. Rather, Rice concentrates on bigger issues like the oft-repeated refrain, “Be careful what you seed,” meaning the hatred and violence you perpetrate now will have repercussions for years to come in the form of death, division and more violence, among other awful things.

Watching this three-hour epic, I was struck over and over again by how this story and Romeo and Juliet are really about breaking that cycle. 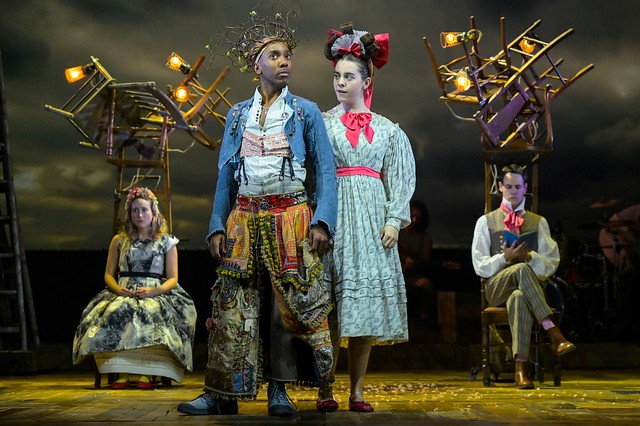 It all starts with what seems an act of kindness when Mr. Earnshaw (Lloyd Gorman rescues a boy (of unknown origin, but darker and more foreign than people in the North of England) from the streets of Liverpool and brings him home to meet his children, Catherine (Leah Brotherhead) and Hindley (Tama Phethean). The Earnshaw children have different reactions to the newly christened Heathcliff (Liam Tamne), their new sibling. Catherine immediately adores him (and he, her), but Hindley resents his father’s new son and embarks on what wil be years of abuse and degradation.

There’s a wildness to the personalities of these moor-dwelling folk, and when more proper society intrudes (as it does with the Linton family), it tends to feel silly and out of place. These moors are distinctive in many ways, and Rice actually brings them to life in the form of a Greek chorus headed by the dynamic Jordan Laviniere. There’s also a giant screen at the back of the Roda Theatre stage that exists to show us the Yorkshire skies, most often brooding and stormy, with flocks of silhouetted birds often fluttering by (set by Vicki Mortimer, video design by Simon Baker).

Rice’s storytelling is rough and tumble in the best way. Houses are represented by windows and doors on wheels. Piles of chairs represent various furnishings, and books on the ends of sticks are birds. It all feels very contemporary and period at the same time, which is difficult to do. When a punk-fueled Catherine grabs a microphone to offer a song of rage before being forced to reject Heathcliff and marry someone else, it feels exactly right.

The three-member on-stage band, often augmented by members of the cast (like the cello-playing doctor, and the many songs (most folk-y and tender) add an element of energy and life that help counter just how bleak this story is.

Rice’s troupe tackles the story with gusto, and it’s quite amusing how often they acknowledge just how confusing the characters can be because there are so many repeated names from generation to generation. Rice calls Catherine, Heathcliff and Hareton (the son of Hindley, played by the same actor) forces of Chaos, Revenge and Hope, and the actors Brotherhead, Tamne and Phethean are all phenomenal as they embody and enliven those messy human elements.

There’s not exactly a happy ending here, but there is a glimmer of hope. It’s well earned and powerful – the kind of thrill that only superb live theater can create and make feel 100% real.