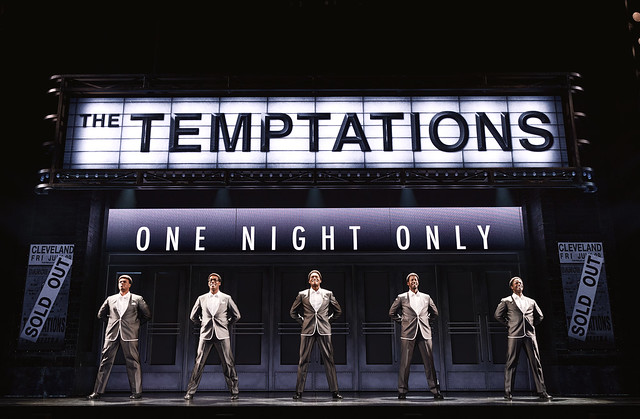 
A little more than five years ago, a new musical about a legendary musical group had its world premiere at Berkeley Repertory Theatre. Ain’t Too Proud: The Life and Times of the Temptations hit a few more cities before it landed on Broadway, where it ran from February 2019 to January of this year (with a Covid shutdown amid the blur of what we were told was 2020). Now the show is on the road again and back in the Bay Area, this time at the Golden Gate Theatre as part of the BroadwaySF season.

[Read my review of the Berkeley Rep production here.]

It’s interesting to revisit a new show and see how it has evolved on its journey to Broadway. Ain’t Too Proud is definitely a stronger show than it was five years ago, although it’s hard to imagine a better cast than that original one (not to take anything away from the touring cast, which is terrific). The book by Dominique Morisseau is tighter and more focused, and the (Tony Award-winning) choreography by Sergio Trujillo is about as fun as it could possibly be as the Temps swoop and slide and do the splits in perfect gentlemanly boy band fashion.

Trujillo and director Des McAnuff also served as choreographer and director on another theatrical boyband biography: Jersey Boys. It’s interesting to see the similarities in the stories of two enterprising musical groups from humble beginnings begin their climb up the pop charts to superstardom and the inevitable drama of ego clashes, addictions, family turmoil and tragedies. There’s nothing new in either story when it comes to the depiction of fame. The climb is more interesting than the descent, and it’s amazing that so much good pop music came out of so much personal and professional chaos.

Jersey Boys is the better constructed show, with its careful balance of character, plot and jukebox musical nostalgia. But Ain’t Too Proud has much better music, though the production itself is overly slick with its many-layered video projections and the increasingly impersonal rush through the Temps’ history from solid quintet to fractured, battle-scarred Motown money-making machine with a revolving door of members. 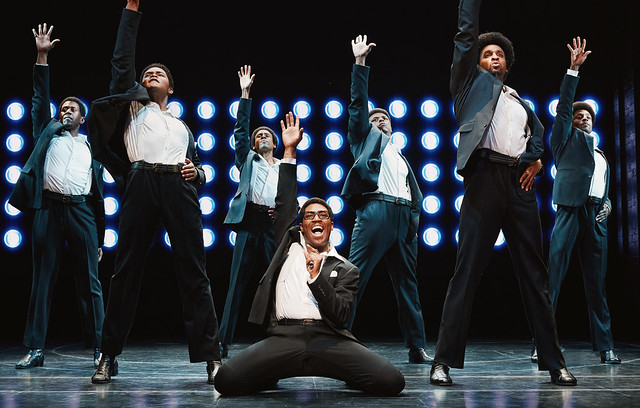 Given that the Temptations’ song catalogue is so rich with treasure, it can be frustrating when a song keeps getting interrupted for plot, and that happens a lot here. The song “Papa Was a Rolling Stone,” for instance, is stretched about as far as it can be across years of exposition involving death and family strife.

But when tunes like “Just My Imagination (Running Away with Me)” or “I’m Gonna Make You Love Me” have room to land, they really land. The onstage band headed by Jonathan “Smitti” Smith, recreates that famous Motown sound with thrilling accuracy,

The cast, headed by Marcus Paul James as band founder Otis Williams (on whose book the show is based and who serves as one of the show’s executive producers), and he’s a solid guide through these “life and times.” The showcase singing (and dramatic fireworks) belong, as they did in life, to David Ruffin, played by Elijah Ahmad Lewis, and Eddie Kendricks, played by Jalen Harris. Both performers have electrifying moments, and the show definitely loses its oomph when their troubles – with Williams, with life, with substances, with health – begin pulling them in and out of the band.

But even as the story loses steam, the music keeps the energy level high and the entertainment value strong. Ain’t Too Proud may not have much new to say about the cost of fame and success, but it celebrates a legacy of great music that will keep the Temptations in the pantheon of our greatest music makers.

FOR MORE INFORMATION
Ain’t Too Proud: The Life and Times of the Temptations continues through Dec. 4 as part of the BroadwaySF season at the Golden Gate Theatre, 1 Taylor St., San Francisco. Running time: 2 hours and 30 minutes. Tickets are $56-$256. Call 888-746-1799 or visit broadwaysf.com.