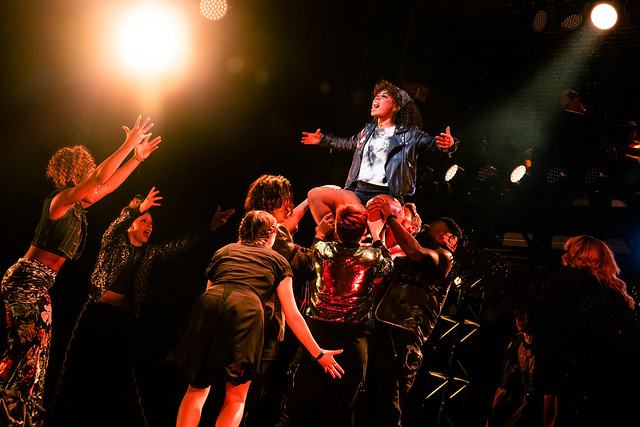 Above: Lauren Chanel (center) and the company of the North American Tour of Alanis Morissette’s Jagged Little Pill, part of the BroadwaySF season at the Golden Gate Theatre. BELOW: Heidi Blickenstaff (left), Allison Sheppard (center) and Jena VanElslander. Photos by Matthew Murphy for Murphy Made


I was 28 when Alanis Morissette’s album Jagged Little Pill came out, and while I bought it and both liked and admired it, a deeper love never formed. I say that in preparation for saying that the musical inspired by the album, which is now having a tour stop at the Golden Gate Theatre as part of the BroadwaySF season, is not for me.

The show arrives with a pedigree that includes a revered director (Diane Paulus), an Academy Award-winning book writer (Diablo Cody) and, of course, the songs from that album that Morissette created with Glen Ballard (and to be fair, there are two new songs written just for the show alongside songs from several other Morissette albums). If you love the songs from the album and/or the Morissette oeuvre in general, you may enjoy the show more than I did.

Even with the theatrical-rock orchestrations by Tom Kitt for an 11-piece band, there’s a sameness to the sound of the songs, whether loud or quiet, and that is not very exciting, even though the show’s aim seems to be to energize Cody’s dissection of suburban darkness with a rock sensibility both in the music and in the aggressive choreography (by Sidi Larbi Cherkaoui).

My problem with the show, in the absence of a score that grabs me emotionally, is that its “the suburbs are really poisonous pits of secrets and cruelty” vibe feels like a rehash of Next to Normal meets Dear Evan Hansen with an abiding wish to be American Idiot.

I like musicals that are about the real lives of real people, but this Pill, for its abundant
issues like opioid addiction, sexual assault, #MeToo, social media shaming, cisgender ignorance (of basically everything, including transgender or bisexual people), it all ends up being very politely wrapped up and presented with a nice little bow on top. The last number, set to “You Learn,” feels like a throwback to 1970s after-school specials. 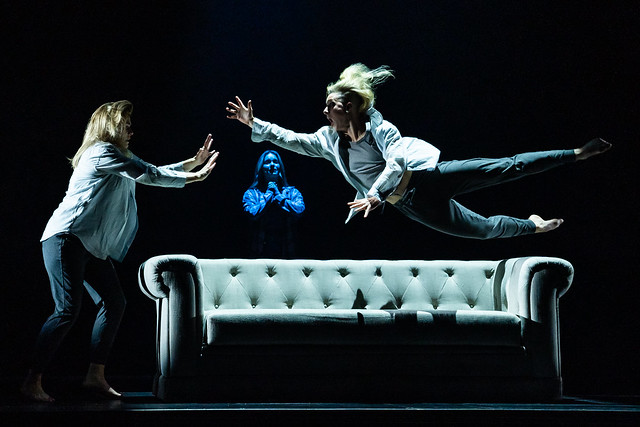 My dream of a “toxic suburbs” show would not have a single couch on stage, nor would there be any realistic representations of perfect houses. We know what the suburbs look and feel like down to our bones. While we blow up the idea of the suburbs, let’s also blow up the way we think we have to convey the suburbs.

Jagged Little Pill comes close to being truly original and electrifying twice, and both instances involve the secretly drug-addicted mom character, Mary Jane, played by the extraordinary Heidi Blickenstaff. The first takes us into her mental state as she gets her family ready for the day, chats with the local busybodies at the pharmacy and then covertly buys drugs in an alley. Throughout the song, “Smiling” (one of the new ones), she moves backward through her day in a steady stream of regret, pain and wishful thinking.

The other comes at Mary Jane’s breaking point, when past trauma and current addiction fold in on themselves in the from of a dance trio (set to “Uninvited”) with Allison Sheppard (as Bella) and the remarkable dancer Jena VanElslander, who is sort of Mary Jane’s dark mirror self. It’s a dazzling moment of character, narrative, song and choreography fusing into one.

More than any other person in the capable cast, Blickenstaff can veer between the biting humor and the soulful depths. Her voice pierces and soars in ways that transcend the songs – she is really something special. So, too, is Jade McLeod as Jo, an evolving teenager whose passion and intelligence burn bright. McLeod’s vocal performance comes closest to Morrissette herself, but without being a mimic makes the songs “Hand in My Pocket” and especially “You Oughta Know” ferociously powerful.

Jagged Little Pill needs more moments/performances like these to make the show feel less like carefully considered ideas about turning a beloved album into a show and more like the explosive American tragedy it seems, at heart, to want to be.