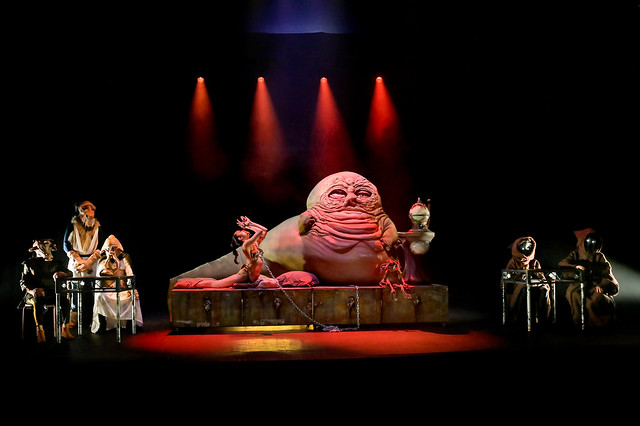 A scene from the burlesque parody The Empire Strips Back at the Great Star Theatre in San Francisco’s Chinatown. Below: A Stormtrooper with a different plan of attack. Photos by Kevin Berne


The light sabers were up and out Friday night at the early performance of The Empire Strips Back, a burlesque show that aims to heat up the Star Wars universe at the Great Star Theatre in the heart of San Francisco’s Chinatown.

Created by Russall S. Beattie, The Empire is adult-oriented fan service for the Star Wars faithful who aim to take their fandom to a more adult level than usually allowed at movie theaters or comic conventions. It’s like fan fiction come to life as favorite characters are allowed to get down and dirty, play with some gender twists and provide a few sci-fi kinks to the classic art of burlesque.

To be clear, this is really burlesque and not some pole-dancing nudie show (not that there’s anything wrong with that; this is just not that). This is a theatrical tease – tantalizing titillation and lots of skin without much actual nudity. There’s vivacious dancing throughout the show’s two-plus hours as well as abundant laughs, many courtesy of cape-wearing emcee Eric Newton, whose character is part of the Lando Calrissian family tree, as well as some clever twists to some of the scenes.

Most of the Star Warscharacters you’d expect to see are here, just maybe not exactly as you remember them. At the Friday night performance I saw, the rowdy, responsive audience showed big love for a pas de deux for Princess Leia and R2-D2 that turns from a graceful dance to Lana Del Rey’s “Young and Beautiful” before shifting into a booty-shaking “Dirrty” by Christina Aguilera (featuring Redman). Not to give anything away, but it turns out that R2 really likes Leia’s dancing. As he should; she’s fantastic, as are all the dancers on stage here. 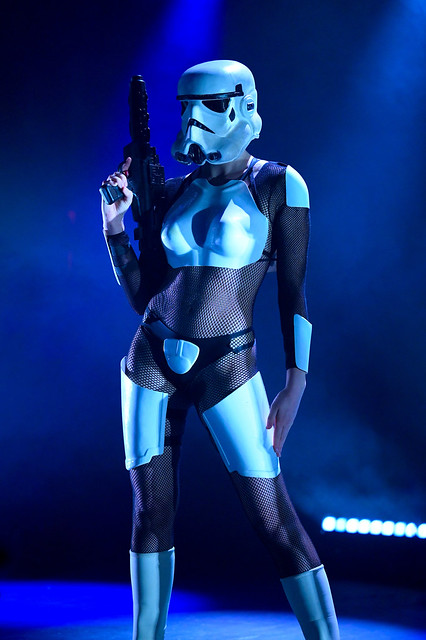 My audience was filled with couples and vociferous bro-types shouting (literally) about their light sabers, and though they were responsive to all of the acts and to Newton’s sometimes stumbling but earnest comedy efforts, the act they seemed to love the most involved Han Solo and Chewbacca dancing (not stripping) to a variety of songs including “Sexy and I Know It” and “I Want It That Way” and getting the audience on their feet, yelling and squatting and otherwise turning the theater into a Wookiee stampede.

All the main Star Wars saga players are here in one form or another, as well as appearances by Admiral Akbar, The Emperor (has to be seen to be believed), Jabba the Hutt, a tauntaun, Imperial Guard, Stormtroopers and Boba Fett. Happily, Jar Jar Binks only gets a passing mention. The sultry soundtrack varies wildly from Nicki Minaj and Guns N’ Roses to Michael Jackson and Ol’ Dirty Bastard. There’s even, if you can bear it, Miley Cyrus and Tenacious D.

A couple scenes, including the Jabba tableaux complete with Leia in bikini and chains and a bizarre “In the Air Tonight” drum solo by Newton with some vague projection technology, still need some finessing. But for the most part, The Empire Strips Back is exactly what you expect and exactly what the fans want: Star Wars with the sexy dialed way, way up in a galaxy far, far away.

FOR MORE INFORMATION
The Empire Strips Back is at the Great Star Theatre, 636 Jackson St., San Francisco. Tickets are $49-$100. Shows are at 8pm Tuesdays-Thursdays, 8pm and 10:30pm Fridays, 7pm and 9:30pm Saturdays and 7pm Sundays. Visit http://empirestripsback.com/