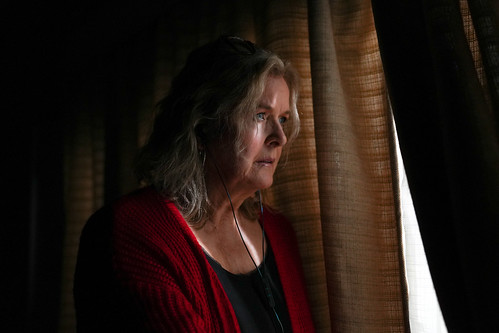 
The premise of Lucas Hnath’s Dana H. may sound, at first, bizarre: a lone actor spends the 75-minute show lip syncing to a recorded interview. It’s certainly a novel approach to theatrical storytelling, and within minutes, the reason for this approach begins to reveal itself. By the end, it’s clear that there could be no more effective or powerful means of relaying this particular tale, which just happens to be the real-life story of Dana Higginbotham, who just happens to be Hnath’s mother.

The simple facts are these: in 1997, Higginbotham had been working as a chaplain in a Florida hospital psychiatric unit, met and counseled a patient named Jim. Upon his release, he ended up kidnapping and holding her for a life-altering five months.

The show, which just won two Tony Awards (for lead actress in a play and for the sound design by Mikhail Fiskel, who reprises his stunning work for this Berkeley Repertory Theatre production), is based on a 2015 interview Higginbotham had with Steve Cosson, who taped several days’ worth of audio. Higginbotham says she had not really talked about the events of her kidnapping in the nearly 20 years since they occurred, and it remains unclear how much her son, who took on the task of editing down many hours of the interview into the show’s short hour and 15 minutes, knew about his mother’s harrowing experience prior to this interview.

When the show begins, the actor Jordan Baker enters what looks like a cheap hotel room set (perfectly detailed design by Andrew Boyce), sits in a chair and is outfitted with earphones that will feed her the audio of the interview that we also hear. The real Dana H. then tells us her story as best she can. We hear Cosson asking questions, and whenever Hnath has made an edit in the audio, we hear a beep before the segment. So even though Hnath (who was away for his freshman year at NYU when the events of the story happened) is only peripherally a character in the play, he’s very much present as a playwright, shaping how we hear his mother’s story.

And what a story. There’s much more here than just the recounting of trauma. There’s deep psychological and emotional wrestling with the very essence of what it means to be human and how fragile our worlds are, even when we think we’re on solid ground. Dana H. is a play that aims to shake our foundations, and it does so with surprising force. It’s not nearly as difficult as we might think to slip into an underworld where none of what we might consider the usual rules apply.

The notion of lip synching, as strange as it might seem, is utterly fascinating. It demands a kind of concentration from the audience that even the best actor probably could not command if she or he were simply acting the material with voice and body. We’re used to that, but we’re not used to this. As a piece of documentary theater, we are and we aren’t relying on Baker’s performance. We have Dana Higginbotham herself telling her story in her own words. But then we have Baker’s uncanny ability to make us forget she’s lip synching and to create the illusion of the real person.

Baker and director Les Waters (also nominated for Tony Award for the New York production), have worked out so many fascinating details that it’s impossible not to hang on every word, every laugh or big intake of breath, every rustling sound or tinkling bracelet captured in the audio. In one way, the lip synching keeps us at a distance – we are dissociated from the action by Baker, who serves as a bridge between the real Dana H. and the theatrical version she is presenting. You might think this technique would minimize the emotion or the shock of the violence or the horror of a life turned completely upside down, but it actually has a powerfully opposite effect as the details and complexities coalesce into a relentlessly captivating, devastating experience that is, mercifully, not without hope or humor.

Many questions emerge from this story, and it seems that Hnath has perhaps pushed himself too far out of the narrative. Every beep in the audio stream reminds us of his presence, and as the story comes into its final chapters and skitters through a number of years, we can’t help wondering where he was and how he fits back into his mother’s life in between the end of events recounted in the story and the creation of this play.

Dana H. stands (or sits, actually) as a wholly unique theatrical experience. It’s real and it’s artificial. It’s at a remove and yet it digs down into our depths. It’s a bold theatrical experiment and its resulting power is such that you’ll feel deeply moved if not more than a little bit terrified of the cracks and terrors it exposes.

[free event]
Dana H. director Les Waters will talk about his superb new book, The Theatre of Les Waters: More Like the Weather at a free Berkeley Rep event on Monday, June 28 at 8pm in the Roda Theatre. The event, Celebrating the Theatre of Les Waters, is free but registration is required: https://tickets.berkeleyrep.org/16522/16825. And the book is essential reading for all theater lovers, especially Bay Area theater lovers who have been lucky enough to see Les’ work on local stages through the years.

1 thought on “In the uneasy room with Dana H.”