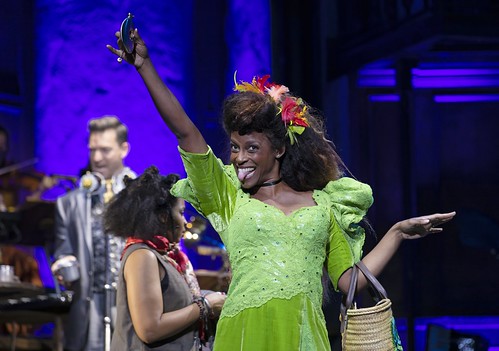 ABOVE: Kimberly Marable is Persephone in the North American Tour of the Tony Award-winning musical Hadestown. BELOW: Levi Kreis (center) is Hermes on stage at the Orpheum Theatre through July 3 as part of the BroadwaySF season. Photos by T. Charles Erickson


How fitting to experience the story of Eurydice and Orpheus in the Orpheum Theatre, which essentially means “house of Orpheus.” That’s where the touring company of the Tony Award-winning musical Hadestown is playing as part of the BroadwaySF season. And while being inside the theater might be a slice of heaven, Market Street after dark is definitely a glimpse into what the underworld might actually be like.

In Hadestown, what we have is an adaptation of Greek mythology (specifically Orpheus and Eurydice and Hades and Persephone) updated and reinvigorated for our fraught times. What began 16 years ago as a grass roots theater project by writer/composer Anaïs Mitchell has grown into a wildly successful Broadway musical with the help of director Rachel Chavkin that addresses climate change, corporate greed, poverty, political reprehensibility and, of course, doomed love.

Because it’s an ancient tale full of hellfire, young love, seasons changing, mature (and rather bitter) love, there’s plenty of fervor in the storytelling to ignite Mitchell’s irresistible, jazzy, folky score, while Chavkin’s staging hews to a storyteller style that involves a narrator (Hermes), a fabulous onstage band, a trio of Fates and a small chorus of dancers/singers.

So, in the end, the show feels less like a musical with fully formed, emotionally connected characters and more like the most enjoyable lecture on Greek mythology you’re likely to see combined with a fantastic concert overflowing with talented performers.

From the rousing opening number, “Road to Hell,” it’s clear that Mitchell and Chavkin are going make this 2 1/2-hour show a mightily entertaining trip through the entanglements of mortals and gods and the forging of hellscapes of our own (and others’) making. As our guide, Levi Kreis as Hermes is nimble, charismatic and vocally assured. He sets the scene, introduces us to the major players and then sticks around to provide insight, comfort and, when necessary, instructions on how to successfully exit hell on foot (those instructions may or may not be followed to the letter). 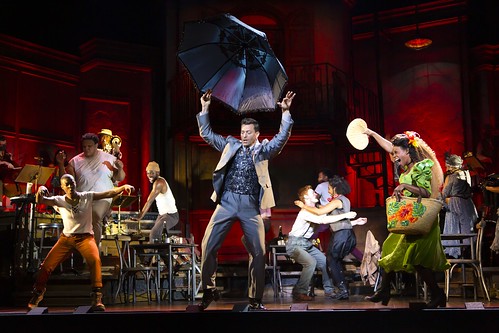 The central lovers are given full-voiced life by Morgan Siobhan Green as Eurydice, a determined but impoverished (and hungry) wanderer, and Nicholas Barasch as Orpheus, the son of a Muse who is working on a song that will bring order back to an off-kilter world.

When spring arrives (late, thanks climate change), it comes in the form of dazzling Persephone (Kimberly Marable) in a vivid green dress (costumes by Michael Krasov). But spring and summer will be short lived because Persephone is called to return to her husband, Hades (Kevyn Morrow), a baritone in a pinstripe suit with American capitalist aspirations.

The reasons for Eurydice and Orpheus’ sudden plunge into the depths of romance and Eurydice’s even faster decision to give up on life and head into the underworld don’t make a lot of emotional sense, so it’s hard to invest fully in their travails. But Green and Barasch have voices so full of character and power that it’s satisfying to hear them describe their experiences rather than fully feel them.

Aside from a few standout staging moments (like Orpheus’ descent into the underworld, which is so much more effectively staged than his journey back out), one of the most delightful aspects of this production is the band itself, which is featured prominently on Rachel Hauck’s set. Has there ever been a Broadway show in which the trombonist (in this case, the marvelous Audrey Ochoa) feels like a major character? Perhaps this should become a thing.

Hadestown offers big bumps of jubilation and sweetness amid its dark sadness and grim realities. Young love can’t solve all its own problems, but older love can be rekindled at a deeper level. Greed, ego, walls and dominion never equal freedom but always result in doom. And music may not be able to right the world, but as this glorious score amply demonstrates, it can make hell seem pretty heavenly for a couple of hours.

FOR MORE INFORMATION
Hadestown continues through July 3 at the Orpheum Theatre as part of the BroadwaySF season, 1192 Market St., San Francisco. Tickets are $56-$256. Call 888-746.1799 or visit broadwdaysf.com.