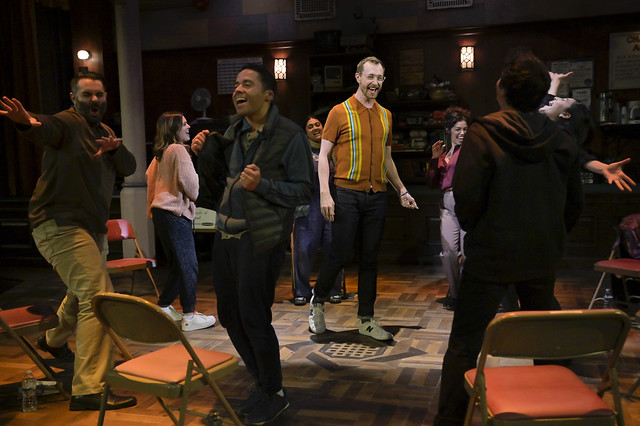 
Writer/composer Dave Malloy calls his Octet a “chamber choir musical,” and that’s certainly an apt description of this one-act show featuring eight performers and a shimmering a cappella score. But an even better description of Octet might be a “revelation” or maybe even a “miracle.”

Commissioned by New York’s Signature Theatre, who premiered the work in 2019, Octet is now on stage at Berkeley Repertory Theatre’s Peet’s Theatre, and it is (and probably was and will likely remain) the right show at the right time. As long as we’re isolated, anxiety-ridden or damaged, this show will have something to say (or perhaps sing is the better word) to us.

There’s a beautiful simplicity to Octet, which is interesting because the show traffics in the internecine complexities of our modern world, more specifically, with the horrors of the Internet: the isolation, the addictions, the pornography, the self-righteousness, the polarization, the anonymity, the cruelty, the fraud…and the list just goes on and on.

The simplicity comes in the show’s form: eight people gather for a 90-minute support group meeting in a faith center community room. The group, created by an enigmatic figure named Saul, is patterned after a 12-step program but with eight guiding principles and designed for people in recovery from multitudinous online damage. Perhaps the most distinctive aspect of this program is that its therapy takes the form of choral singing. Armed with their pitch pipes, group members sing some hymns (of Malloy’s creation, of course, and very specific to the 21st century), but when it comes time for them to share their stories, these are also presented in song. 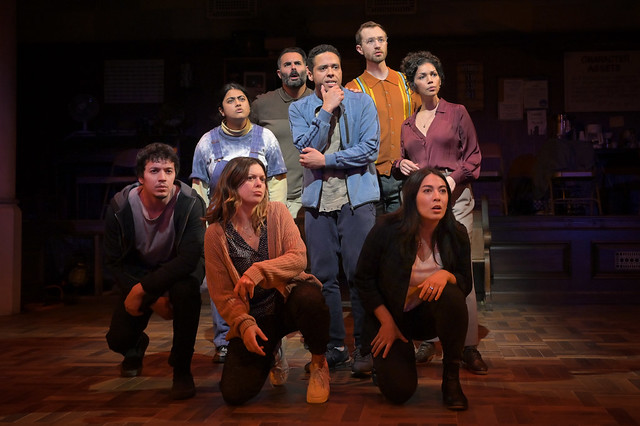 The idea seems to be that this group embodies the exact opposite of the trauma suffered by its participants. By singing together, they are physically (through voice), mentally and emotionally connected in a way rivaled only by sex. Their octet is a living, creative organism that can only exist when they are together, and the mind-blowing beauty of what they create is matched only by the emotional wallop of what they’re actually telling each other (and us) about what they’ve suffered and how they’re surviving and evolving.

In addition to his glorious score, Malloy’s script also has its own power. There are familiar sitcom rhythms to the humor, but that’s just one of the ways Malloy pulls us in and calms us down before taking us places we could never have expected. There’s real wit here (especially in some of the lyrics), and it’s easy to relate to pretty much everything being discussed, which is why so much of it is at once funny and terrifying. There’s also a level of mysticism at work here – the Tarot factors in, as does a chatbot named Eugene Goostman that apparently fooled people into thinking it was human.

Local audiences have the benefit of seeing most of the original New York Octet cast reprising their roles, along with most of the creative team headed by director Annie Tippe. There’s not a false moment among the pitch-perfect actors, and the verisimilitude of the situation – the details in the set by Amy Rubin and Brittany Vasta are fascinating – only amplifies the otherworldly places the music takes us (Malloy did the vocal arrangements, which are like a language unto themselves, and Or Matias is the sterling music supervisor and music director).

Each of the actors gets a moment to shine, but, by design, the show’s undeniable power comes from all the voices. It’s hard to imagine anyone better in these roles than Adam Bashian, Kim Blanck, Alex Gibson, Justin Gregory Lopez, J.D. Mollison, Isabel Santiago, Margo Seibert and Kuhoo Verma. We don’t know all that much about their characters, but we know enough to see ourselves and the people around us in them, and if it feels like they are working to be better and do better, so can we. Somehow, through the magic of experiencing something profound together, the octet expands to include the audience.

In the hours since I left Berkeley Rep, the show has continued to vibrate in me, and I haven’t interacted with a screen without thinking about it and about how ill equipped we have been to keep up with the rush of technological advances and all that entails (and the effect on our brains and our attention spans and our relationships with others). I can’t sing, but that doesn’t mean I don’t feel a very strong urge to return to that community room as one of the Friends of Saul.

Octet is just astonishing. It is one of those theater experiences that makes good on the promise of the art form – the kind of experience that keeps you going to show after show after show because you know this kind of transcendence is possible every time you step into a theater.