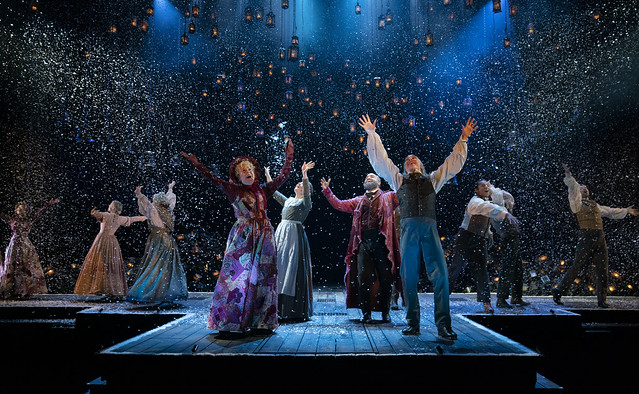 
We’ve experienced A Christmas Carol in so many ways, so many times over so many years that we’re all a little numb to the frights and frissons of the Charles Dickens perennial. As much as I love the story – and especially the metaphorical kick to the groin of the greediest and meanest among us – I sometimes dread the thought of having to watch gnarled old Scrooge get smoothed out by Jacob Marley and the ghosts of Past, Present and Future.

Happy to report, then, that the new adaptation of A Christmas Carol by Jack Thorne (a co-author of Harry Potter and the Cursed Child theatrical enterprise, which, incidentally, resumes performances at San Francisco’s Curran Theatre Jan. 11) has a lot of new fizz in its Fezziwig. Now at the Golden Gate Theatre as part of the BroadwaySF season, this Carol is aggressive in its approach as both a ghost story and a psychological excavation of Scrooge, with a whole lot of merriment (and snow) and zippy theatricality (and snow) and music (and did I mention snow?) thrown in for good measure.

At about 2 1/2 hours (including intermission), this version strips out as much as it adds. Directors Matthew Warchus (original London and Broadway productions) and Jamie Manton (this production) blends straightforward storytelling by the ensemble with fully dramatized scenes from Scrooge’s dark night of the soul. The bones of the story are very much as Dickens constructed them, but Thorne goes deeper into why Scrooge turned out the way he did. An abusive, alcoholic, debt-ridden father seems to be the biggest factor, but we also spend time with Scrooge as a young man falling in love with Mr. Fezziwig’s daughter, Belle, and then essentially abandoning her because he discovered the lure of money (and hoarding it) instead.

What’s really interesting about Thorne’s adaptation is not so much the rather easily configured roots of Scrooge’s misery and miserliness (blame the parents!) but rather the way the people from Scrooge’s past are allowed to confront him. For instance, we usually only see Jacob Marley, Scrooge’s dead partner, at the beginning of the ghostly visits. But here, Scrooge and his only friend get to compare notes on the benefits of redemption once Scrooge realizes the error of his ways. Scrooge also gets to find closure with the only woman he ever loved (and she is more generous to him than he probably deserves), which lends an affecting touch. 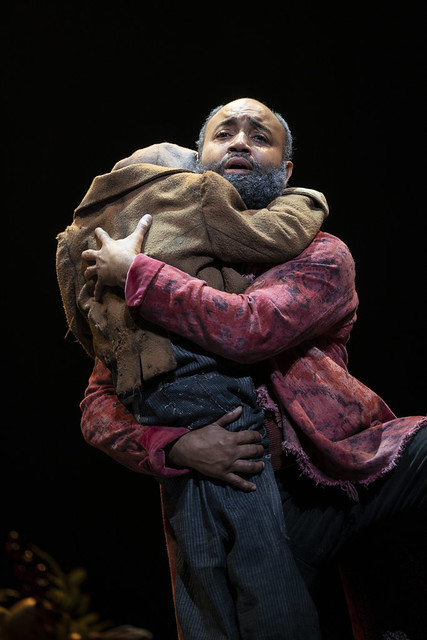 The striking set by Rob Howell (who also designed the costumes) takes us into a dark netherworld of swirling smoke (effectively sliced by Hugh Vanstone’s razor-sharp lights), piles of garbage, chains descending from the heavens and hundreds of lanterns hanging above the stage and out into the auditorium.

The 15-member ensemble sings, dances, narrates and embodies the characters with a flashy panache that keeps the show vibrating at a pretty high level. Act 1, as expected, is pretty heavy and dark, but the real genius of the show is how Act 2 just keeps ratcheting up the happiness in sometimes surprising ways. Without spoiling anything, let’s just say the actors make full use of the theater, on stage and off, and that your white Christmas dreams can come true – temporarily anyway – multiple times.

Any Christmas Carol is only as strong as its Scrooge, and Francois Battiste gives a mighty performance. His Scrooge is always a few steps ahead of the ghosts as he steadfastly refuses to succumb to their dime store psychoanalyzing and their sentimental tricks to soften his coal-hard heart. He gets that he’s a bad guy and owns his choices, and that makes his transformation all the more satisfying. He’s the kind of horrible person who stands firm in his greed, all the while justifying what a great person he is and what a vital service (moneylending aka money gouging) he provides to the world. These are the people – and we hear from them and their acolytes every day in the real world – who never seem to suffer from the pain and misery their greed causes in the world.

But then something clicks in Scrooge. Call it the “Tiny Tim” effect, but if every Tiny Tim could be as endearing as Gabriel Kong (who played the role on opening night and shares it with Charlie Berghoffer IV), the world would likely be a better place. The same is true about this production’s effective ghosts: we need Nancy Opel (Past), Amber Iman (Present) and Monica Ho (Future) to maybe focus some of their work outside the theater in certain political and judicial locations around the country.

There’s not a sour note in the entire cast, and the pleasure they offer, especially when they’re making the house ring with their handbells (lovely musical direction by Matt Smart), is genuine and heartfelt. This is a Carol that lands its punches and then lifts us up with joy. Just when we think it’s over, the volume of that joy gets turned up a little more and then a little more until the darkness and pain are just memories.

FOR MORE INFORMATION
A Christmas Carol continues through Dec. 26 at the Golden Gate Theatre, 1 Taylor St., San Francisco, as part of the BroadwaySF season. Tickets are $56-$256 (subject to change). Call 888-746-1799 or visit broadwaysf.com.
BroadwaySF’s COVID policies are here.