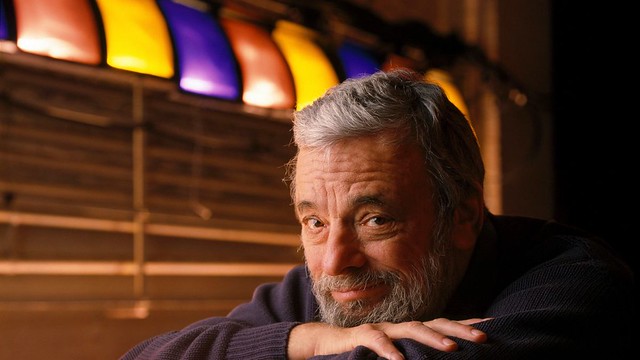 One thing we can say for sure about Stephen Sondheim is that he died knowing just how loved and admired he was. It seems like the legendary Broadway composer was receiving lifetime tributes for at least the last 40 years, and it also seems like he was there for all of it, humbled, slightly embarrassed but always pleased and moved.

Sondheim’s death this week at age 91 can’t really be described as a surprise, but it’s still a shock. At least since the ’70s, when his incredible output included Company, Follies, A Little Night Music, Pacific Overtures and Sweeney Todd, he has been contemporary musical theater’s north star – probably the single greatest influence on generation after generation of musical theater writers, directors and performers. To see that light extinguished is profoundly sad, even though the work – so much brilliant work! – will flourish for many generations to come.

Sondheim has been one of my musical theater passions for so long, I had to really stop and think about a time when I didn’t know every show, hadn’t read the books (by him, about him, about his shows), hadn’t obsessively collected the recordings. Growing up in Reno, NV, in the ’70s and ’80s I didn’t have a lot of opportunity to see Sondheim shows, but the few I did made a huge impact. I know my first exposure to Sondheim came through Barbra Streisand’s The Broadway Album in 1985. Seven of the 12 tracks involved Sondheim as either composer/lyricist or just the lyricist, and he famously re-wrote two songs, “Putting It Together” and “Send in the Clowns,” at Streisand’s request (which also got his photo into the liner notes, marking the first time I remember seeing his grizzled face).

The first Sondheim show I saw was the University of Nevada, Reno’s Theatre and Dance Department’s 1987 production of Sondheim and James Goldman’s Follies. The irony was that the show is about a great old theater about to be torn down to build a parking lot was being performed in a brand-new new theater built on what was formerly a parking lot. About two years later, the same company in the same space did Sondheim and George Furth’s Merrily We Roll Along, a supposedly troubled show that absolutely blew my mind and cracked my heart open.

After moving to San Francisco and becoming a theater critic, I didn’t fully review a Sondheim show until 1998’s Follies at American Musical Theatre of San Jose. I wasn’t crazy about the production, but I loved the show, writing, “Throughout Sondheim’s 40-year career, there have been complaints about his shows being too cerebral and not hummable. Well, those complainers have never seen Follies. Sure, the lyrics are, as expected, smart and clever. And the grand pleasures of the follies numbers are offset by a rather snide take on marriage and relationships. But what songs! This is Sondheim at his most audience-friendly and his most hummable.” 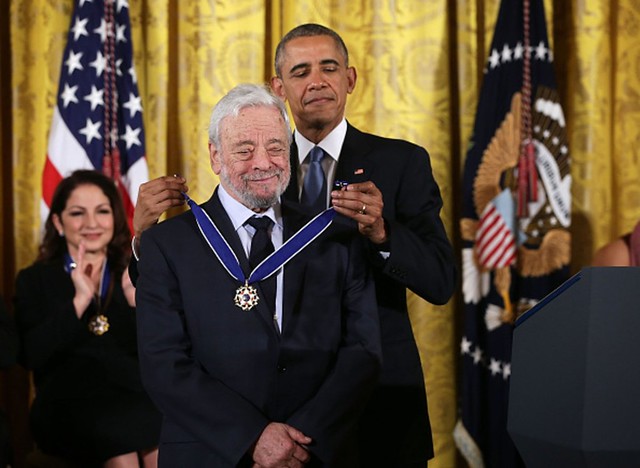 I have since seen live productions of most of Sondheim’s shows (except for Anyone Can Whistle, The Frogs and his last produced show, Road Show) and couldn’t name a favorite because I’m constantly changing my mind. Sometimes it’s Company (sheer genius top to bottom), sometimes Merrily (so much beauty amid so much pain), sometimes A Little Night Music (the glorious music), occasionally it’s even Sweeney Todd (the humor is unmatched).

To my mind, it’s all of a piece – a giant slice of creative brilliance we have been graced to experience since Sondheim’s lyricist-only days on West Side Story and Gypsy and on through everything he touched through these last months when he appeared on Stephen Colbert’s talk show, attended the first preview of the re-opened Company and sang the praises of the soon-to-be-released remake of West Side Story from director Steven Spielberg.

In the wake of Sondheim’s death, what has been most striking in the flood of tributes is the gratitude for his colossal contribution to the arts. I don’t think we can even begin to wrap our heads around just how great his impact has been or will continue to be. Look no further than the recent film version of …tick, tick, BOOM on Netflix in which Sondheim is a character (played by Bradley Whitford who mentors the main character, based on Rent composer Jonathan Larsen to whom, like so many, Sondheim served as mentor and champion. Toward the end of the movie, Jonathan receives an answering machine message from Sondheim, but listen closely: it’s not Whitford. It’s actually Sondheim. Director Lin-Manuel Miranda had shared the scene with Sondheim, who felt the message as originally written was “trite” and would Lin mind if he took a stab at it. He not only re-wrote it, he also recorded the message. “It makes me weep to even think about,” Miranda told EW magazine. “Because he was such a mentor to Jon and generations of songwriters.” Just as Oscar Hammerstein was a mentor to Sondheim.

I have a friend who, for years, has insisted that she simply doesn’t like Sondheim, try as she might. Too many words, not enough melody. And for all those years, I’ve had a running playlist in my head to try and convince her of Sondheim’s genius. That will probably never happen, but I do have a Spotfiy playlist of favorites that I’m happy to share. The genius, the versatility, the humor, the heart, the keen observation – it’s all here. And always will be.

9 thoughts on “The never-again genius of Sondheim”