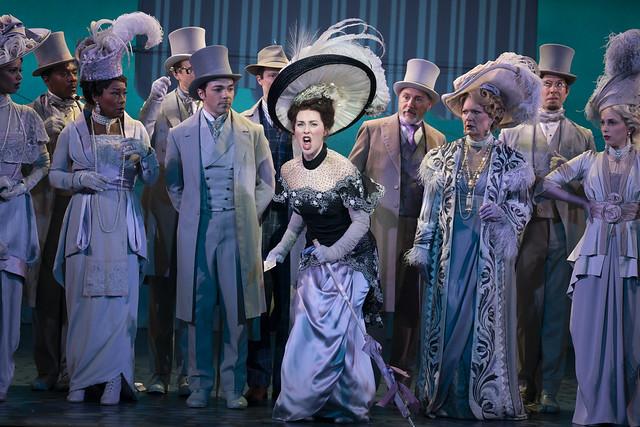 
My Fair Lady has always been so brilliantly constructed, so full of beautiful, vital music that its nearly perfect machinations can leave a slight chill. The very idea of turning George Bernard Shaw’s 1912 play Pygmailion into a musical was at once genius and ridiculous – how could such a brainy parlor comedy sing and dance? Composers Alan Jay Lerner and Frederick Loewe (working with director Moss Hart) figured it out in 1956, and a classic play was soon eclipsed by a classic musical.

As we know, classic musicals don’t always remain in sync with changing times, especially in respect to issues of race, gender and sexuality. Given that My Fair Lady flexes Shaw’s feminist muscles, it is interesting to re-visit the show in the sumptuous, expertly appointed touring production of the Lincoln Center Theater’s 2018 revival that is now at the Orpheum Theatre as part of the BroadwaySF season.

There has been so much focus through the years (from the original Broadway production through the 1964 movie and endless tours and regional/community productions) on the relationship between Henry Higgins (the teacher) and Eliza Doolittle (the student) that the center of Shaw’s story seems to have shifted. This is a show about class, one of the artificial restrictions society employs to determine who is allowed to do what and to whom. In this case, the wealthy British elite (high society, aristocracy, royalty, etc.) maintain their position over the, as one character puts it, “undeserving poor.”

When Higgins makes a bet with his pip-pip-cheerio chum, Pickering, that in six months, he can pass off Eliza, a “draggle-tailed guttersnipe” flower girl, as a duchess at an embassy ball, he’s making a casual revolt against societal norms for his own amusement (and to maintain his gargantuan ego by proving what a god-like teacher he is). In a musical, this would constitute the “A” relationship, which would normally be a romantic one, and the “B” relationship, here between Eliza and an entitled, rather dopey suitor named Freddy Eysnford-Hill, would be the secondary romance. But Shaw wasn’t aiming for conventional romantic comedy here, even if that’s what audiences crave. Higgins and Eliza develop an extraordinary relationship/battle of wills, but romance isn’t (and shouldn’t) be part of it, which makes the ending problematic (we’ll get to that). 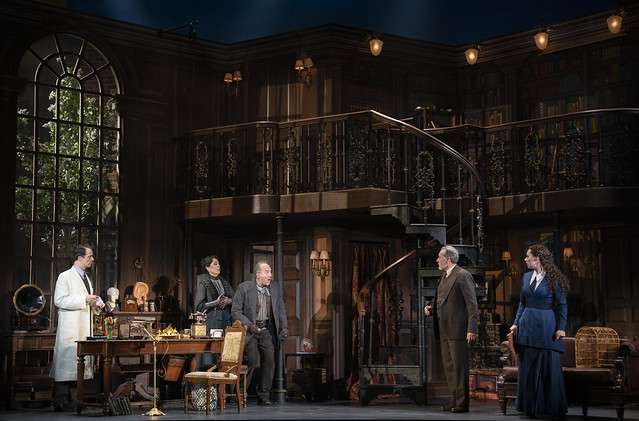 It also means the Eliza-Freddy plot hardly matters, although the stalker-like Freddy, who writes to her multiple times a day and can’t seem to tear himself away from her doorstep, gets a lovely song in “On the Street Where You Live.” The much more interesting secondary story here belongs to Eliza’s father, Alfred P. Doolittle, and his unlikely ascent from drunken dustman and general blackguard to eminent philosopher and money bags. He also gets two of the show’s liveliest songs, “With a Little Bit of Luck” and “Get Me to the Church on Time.”

There’s so much more than a love story here, and director Bartlett Sher’s sterling production brings that out. There are flimsy tours and there are grade-A tours – this falls firmly in the latter category. The design, the onstage talent and especially Sher’s smart, detailed direction make this show shine for a new generation. And here’s the best thing of all: it’s warm, emotional, funny and sharp without having to make any excuses for its age.

Much of the show’s heart comes from Shereen Ahmed as Eliza as she breaks down the character’s gruff exterior to reveal intelligence, vulnerability and strength. The first hint of Eliza’s inner life comes in “Wouldn’t It Be Loverly” and then comes fully forward in a rage-filled “Just You Wait,” which is is staged on Michael Yeargan’s fantastic turntable set allowing Eliza to storm through multiple rooms of Higgins’ handsome two-story London flat. By the time Eliza has her breakthrough in “The Rain in Spain,” we love her, and then she totally captivates us with a shimmering “I Could Have Danced All Night.”

Laird Mackintosh brings a sort of Hugh Laurie quality to his Higgins and gives the character an energetic bounce that rivals the nonstop vibrations of his brain (and, it must be said, ego). Adam Grupper as Doolittle is a comic force, but he’s nuanced and lets the character build. He could stop the show with “Luck” but doesn’t (which can make Act 1 peak too soon), but completely lets loose in Act 2 with his show-stopping march to get to the church on time. This is also when choreographer Christopher Gattelli gets to let it all out with drag queens, drag kings, lust, booze and general debauchery of the highest order.

Every My Fair Lady, although a show full of potent ideas and stinging smackdowns, will always be judged on its “Ascot Gavotte” because a) it’s hilarious and b) it’s such a showcase for the costumes. Designer Catherine Zuber rises to the challenge here (and everywhere else) with a feast for the eyes.

Sher has tinkered with the musical’s ending to make it more in line with Shaw’s original ending (spoiler alert: Eliza asserts her independence and does not stay with Higgins, nor does she fetch his slippers), although the way it’s staged is rather bizarre. It’s almost as if Eliza appears as a figment of Higgins’ imagination as she wordlessly breezes into his flat through the door and out through one of the invisible walls. Still, it’s gratifying to see that Sher sticks with the anti-rom-com trajectory.

I also couldn’t help thinking that maybe it’s time for another movie version – one that stays sharp instead of gets mushy but lets us keep this glorious score alive. In my dream version, the song “Hymn to Him” (aka Why Can’t a Woman Be More Like a Man?) becomes literal as confirmed old bachelors Higgins and Pickering discover their deep and abiding love for one another through their love of phonetics and their staggering privilege. Shaw never quite got there, but in time, he probably would have. Higgins could be played by Andrew Scott (the sexy priest from “Fleabag”) and Pickering by Benedict Cumberbatch. And Eliza? Adele, of course. Now wouldn’t that be loverly?