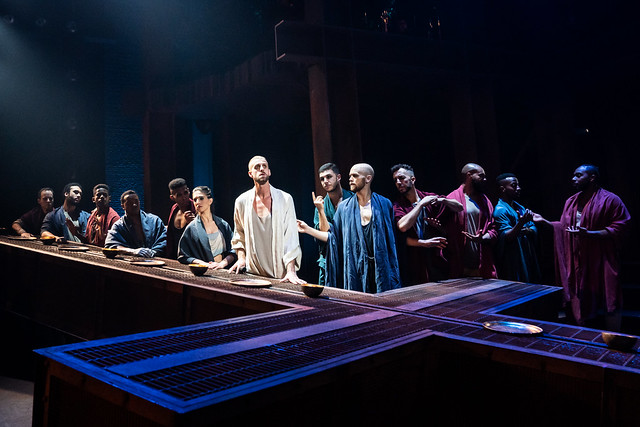 The cast of the North American tour of Jesus Christ Superstar (featuring Aaron LaVigne in the center as the title character) has a light last supper. The show is at the Golden Gate Theatre as part of the BroadwaySF season. Below: James T. Justis is Judas. Photos by Matthew Murphy


Hosanna, hey sanna, sanna sanna ho! It sure feels good to be back in a big theater seeing a big Broadway show. This must be the way some people feel going back to church. You might even call it a religious experience.

Except when the show in question is Jesus Christ Superstar, that spiritual uplift quickly turns into confusion. With only a limited knowledge of the Bible, I’ve always found JCS to be a mediocre show with occasional thrills in the score by Andrew Lloyd Webber and Tim Rice. I can fully understand why this show became such a sensation more than 50 years ago when the concept album was released (and nothing fires sales more than cries of “Sacrilege!”). Here was a rock opera/Passion Play that really rocked and yowled like the music of the day but also had some orchestral heft to differentiate it from other emerging rock musicals (like Hair).

I can also understand how audiences might have been baffled when the show opened on Broadway Oct. 12, 1971 (50 years ago this week!). If you don’t already know the story of Jesus’ last few weeks or who Judas or King Herod were, the show doesn’t do much to help you out.

Over the last five decades, JCS has become a mainstay, and it seems revisions and revivals and re-imaginings have kept this show resurrecting nonstop. I have yet to see anyone make a case for this being a great show, and the 50th anniversary North American tour now at the Golden Gate Theatre as part of the BroadwaySF season is more interesting than many productions I’ve seen, but it still falls significantly short of miraculous. 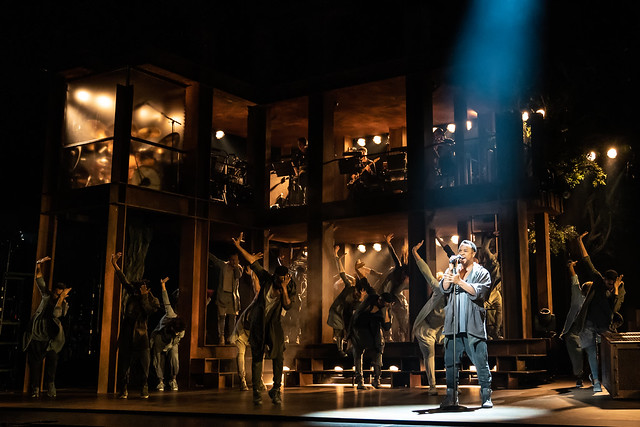 Director Timothy Sheader, who first staged this production for London’s Regent’s Park Open Air Theatre in 2016, aims to rediscover the zeal and youthful cheekiness of the original two-disc concept album by training focus on the music and making this show feel more like a concert than a traditional musical. And the music (not necessarily the voices) quickly emerges as the best part of this touring production. Music director Shawn Gough leads an 11-piece ensemble that expertly captures that unique Lloyd Webber sound blending the symphonic with rock, most notable here in the horns and the guitars.

Set on what looks to be the naked girders of a ruined building (set design by Tom Scutt, who also designed the hair and the costumes), the band occupies the upper levels while the ensemble scampers all over the stage, with a lot of concentrated action on the cross-shaped platform.

Actors in this show don’t have a lot to work with when it comes to characters. They get one act and 95 minutes of nearly nonstop singing that fails to provide much in the way clarity or emotional connection. Aaron LaVigne only really makes an impression as Jesus during “Gethsemane.” Otherwise he just seems like a nice, man-bunned hipster who gets caught in a violent sci-fi story with a mean friend (James T. Justis as Judas) and a sex worker friend who doesn’t know how to love him (Jenna Rubaii as Mary Magdalene). Pilate and the Roman soldiers look like murderous aliens, and King Herod (a fun Paul Louis Lessard) seems to be visiting from an entirely different, much campier and more enjoyable planet.

There’s a weird blend of the realistic and the mythical here. For instance, when Jesus is arrested and is heading toward execution, he emerges shirtless and drenched in blood. Then, when it’s time for the 39 lashes, the whip is replaced with golden glitter bombs. By the end of the lashing, he looks like a terribly abused Academy Award crossed with a disco ball. Probably not the vibe you want when you’re about to watch someone die slowly on a cross.

The thing about Jesus Christ Superstar is this: if you get carried away by the original album (and it still sounds remarkably vital), there is likely never going to be a production better than the one in your head. But isn’t it interesting that the theater where JCS premiered 50 years ago, the Mark Hellinger Theatre, is now the Times Square Church? Hosanna indeed.

FOR MORE INFORMATION
Jesus Christ Superstar continues through Nov. 7 as part of the BroadwaySF season at the Golden Gate Theatre, 1 Taylor St., San Francisco. Tickets are $56-$226. Call 888-746-1799 or visit broadwaysf.com