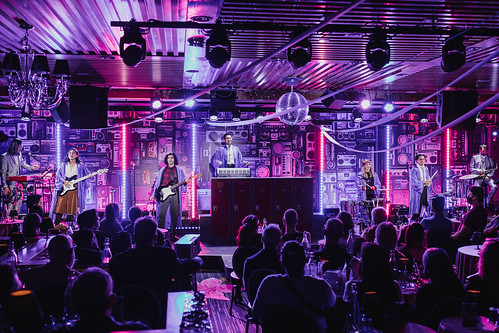 
Feinstein’s at the Nikko, one of San Francisco’s last great cabaret rooms, is coming out of its pandemic slumber in day-glo colors, acid-washed denim and a new show that moves way beyond the traditional piano-bass-drums behind a singer idea.

We all love a cabaret diva and a set of songs from the Great American Songbook, but BratPack, which has transformed the room (and especially the stage) at Feinstein’s, is the high-energy, nostalgia-fueled fun fest we need right now.

And by “we” I really mean any GenX-er who graduated high school in the ’80s (greetings from the Reno High School Class of 1985) or who has a deep and abiding love of the John Hughes ouvre. And if you have to ask “what is a John Hughes ouvre?” this show may not be for you.

Hughes was the writer/director who tapped into the ’80s zeitgeist with the kind of generation-specific ferocity that has hardly been seen since. The Breakfast Club, Sixteen Candles and Pretty in Pink comprise the holy Hughes trinity, and those are the three primary inspirations for BratPack, which takes music from the soundtracks and dialogue from the scripts to craft something in between a musical adaptation and a revue with hints of a really great wedding band and a ship-rocking cruise show thrown in for good measure.

Co-creators Shane Scheel and Anderson Davis take the five basic character outlines from The Breakfast Club – the Athlete, the Basket Case, the Criminal, the Princess and the Brain – and set them loose on the plots and music from Hughes films (which also include Ferris Beuller’s Day Off, Weird Science and Some Kind of Wonderful) as well as other ’80s teen flicks like Say Anything, Fast Times at Ridgemont High and St. Elmo’s Fire (not actually about teens but still feels like teens from a Hughes movie playing grown-up).

The fun is in the mash-up and all the surprises thrown in to delight and amuse ’80s devotees (relics?) throughout the show’s 90 minutes. There are only two dedicated musicians on stage (including musical director Matt Grandy on keyboards), so it’s up to the cast – Rachel Lark (Basket Case), Michael Martinez (Jock), Zahan Mehta (Rebel), Bryan Munar (Geek), May Ramos (Princess) – to add bass, guitar, drums, keyboards and percussion. Scott Taylor-Cole gets to play the enjoyably mean “adult” who takes the form of Ferris’ vengeful school principal and the sadistic detention monitor, Richard “Dick” Vernon. “Don’t mess with the bull, young man. You’ll get the horns.” 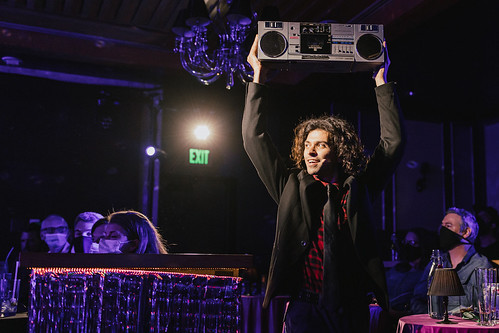 The performers sound great – ’80s power with some contemporary singing competition cascading – and the music is appropriately LOUD as they build an all-encompassing teen story about secret crushes, proms, graduation, locker rooms, detention and fantasies. Their building blocks are songs like “Don’t You (Forget About Me)” (the song we hear the most throughout the evening), “True,” “In Your Eyes,” “If You Leave” and “Melt with You.” There are also non-’80s tunes that factor significantly into some of the movies involved like “Try a Little Tenderness” (Pretty in Pink) and “Twist and Shout” (Ferris Bueller) as well as a pair of David Bowie greats – “Changes” and “Young Americans.”

It’s basically an ’80s-themed party with great music, favorite lines from the movies and re-creations of some of those iconic moments (think kisses over a birthday cake and boom boxes held aloft) – and it’s a whole lot of fun. Even the drinks are a kick – inspired by Capri Sun juice pouches, the brightly colored cocktails come in pouches with straws (there are traditional drinks available as well as food). Everything is ordered and paid for on your phone – one of the nice service improvements that COVID has given us.

Speaking of COVID (sad to even have to talk about something that didn’t exist in the ’80s), Feinstein’s requires proof of vaccination and masks when not eating or drinking. Cast members, who are vaccinated and tested regularly, are all over the room, belting and dancing their hearts out. Those who don’t want “Rebel Yell” sung in close proximity or who don’t want to sing-along with the Simple Minds’ “laaaa, la la la la la” might not be comfortable here.

Otherwise, this high-voltage exercise in cinematic and pop music nostalgia is the perfect place to revel in and re-live nearly 40-year-old memories that only seem to (day)glow brighter with time.