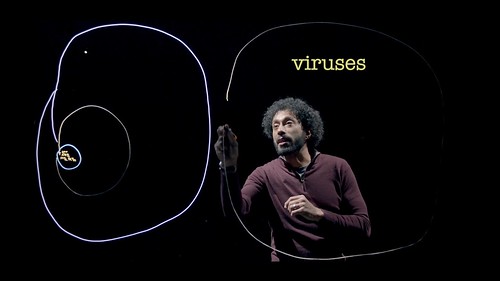 
San Francisco playwright Lauren Gunderson was already one of the most admired and produced playwrights in the country. She didn’t necessarily need to be on the forefront of pandemic drama. And by pandemic drama, I mean several things: creating new, relevant, interesting work in this time of theatrical shutdown; but also creating work having to do with the pandemic itself. As a writer with a special penchant for creating drama fueled by a love and fascination with science, it seems logical that Gunderson would find a way to bring the science of our current situation to the stage in a way that only she can.

It just so happens that Gunderson’s husband, Dr. Nathan Wolfe, is one of the world’s foremost virologists. The Catastrophist is Gunderson’s one-man play about her husband, and it’s fascinating (again) on several levels: it can’t help but be interesting when a skilled and thoughtful writer decides to write about her spouse, his work and his inner life; and hearing from Wolfe (via Gunderson, of course) about why a brilliant scientist chases down viruses to try and prevent pandemics is, certainly, a relevant and captivating topic, especially as told by Gunderson, who has a flair for making the scientific entertaining and comprehensible.

William DeMeritt stars as Wolfe, standing on a stage, wrestling with the fact that his wife has made a play – this play – about him and acknowledges a sort of silent communication with her, like he can her her whispering in his ear at certain times during this 80-minute drama. It’s one of those conventions of a solo play that has to address the fact that a person is alone on a stage talking for whatever reason. Except in this case, DeMeritt is playing Wolfe in a theater empty of audience but filled with cameras. Jasson Minadakis directs this co-production from Marin Theatre Company and Round House Theatre (in Maryland) of a play commissioned by MTC, and he keeps the camera work active. DeMeritt’s sharp, impassioned performance is captured with the actor delivering his focus directly into this camera, then turning to this camera on this line and back to that camera on that line. It looks like a stage performance, but it feels more like a carefully choreographed and edited movie (especially toward the end). 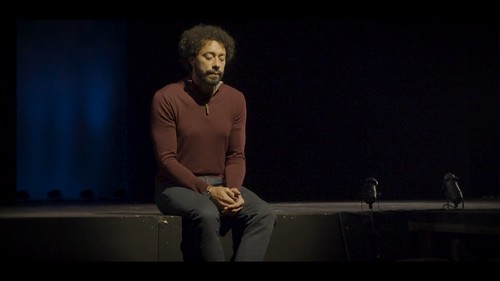 For me, the most interesting aspect of the play is its glimpse into the science of viruses and what led Nathan into a world filed with words like zoonotic, eukaryote and prokaryote. The fact that viruses, as Nathan tells us, are the most abundant life form on the planet and that viruses are built into our DNA is startling, especially since we all have a newfound awareness (and fear … and loathing … and fear) of viruses. But this is more a play about a scientist – an “expert in a terrible thing” as he puts it – than it is about our current predicament.

At a certain point, Gunderson leaves the science and dives deeper into the personal – Nathan’s relationship with his dad, Nathan’s relationship to becoming a dad, Nathan facing his own health crisis – all of which is embodied with intensity and gusto by DeMeritt. But I found myself wanting to know more about what Nathan had to say about where we are, almost a year into this thing, and how we get out and what dangers still lie in store.This, however, is not a TED Talk. The real Dr. Wolfe has already done that (watch it here – it’s fantastic). And written a book and will likely do more of both in the future. This is a play about a complex, likable human with a wealth of knowledge and a job that sets him apart but who is also a son, a dad and a husband. We experience all of that here.

I’d still like to spend time with Nathan – real or fictional – to know more about where we are now, but perhaps that will be The Catastrophist: Act 2, performed when we can all be in the same room together and we can, at along last, feel like this particular catastrophe is in the past.

FOR MORE INFORMATION
Lauren Gunderson’s The Catastrophist is available for streaming in an extended run through July 25. Tickets for on-demand streaming are $30. Call 415-388-5208 or visit marintheatre.org.